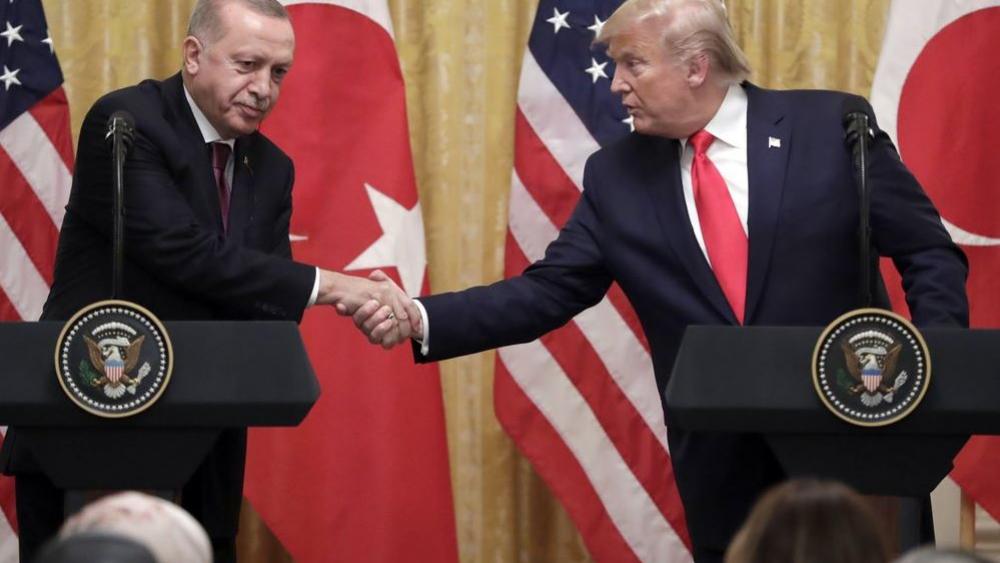 WASHINGTON - While much of Washington was focused on the impeachment inquiry proceedings on Capitol Hill, President Trump was busy hosting Turkish President Recep Tayyip Erdogan at the White House.

The visit marked Erdogan's first trip to the US since 2017 and it was met with a lot of criticism.

Erdogan is not winning any popularity contests with most American people which makes it difficult for many to see that President Trump appears to be a fan.

CBN News spoke with an expert Wednesday who said this meeting was an opportunity for Trump to take a firm stand against some of Erdogan's actions.

"It's a great honor to be with President Erdogan," Trump told reporters.

As President Trump welcomed Erdogan and his wife to the White House his tone was positive, almost doting.

"The president and I have been, we've been very good friends," Trump said. "We've been friends for a long time almost from day 1."

The president had been criticized for welcoming Erdogan to the White House especially after the Turkish leader ordered an invasion of northern Syria last month as soon as American troops pulled out. The US subsequently worked to broker a cease-fire with the Turks.

"I want to thank the president for the work that they've done again. This has been thousands of years in the process," Trump said.

"I think it wouldn't be surprising if we saw a repeat of this, because Erdogan knows so far there hasn't been any push back," Aykan Erdemir, a senior fellow at the Foundation for the Defense of Democracies told CBN News.

Erdemir is an expert on Turkish affairs. He says the two leaders meeting together is really not the issue.

"I think the skepticism is that for the most part, Erdogan has enjoyed praise from the White House," he explained. "And I think critics here in the US mainly expect hard truths to be spoken."

"We have seen repeated reports of the targeting of Syriac Christians and Armenians, Protestants and the Yazidis in the region and these Turkish proxies enjoy impunity," Erdemir said.

The leaders also focused trade between the two countries with Trump saying he'd like to see it increase from $20 billion a year to $100 billion.

Some members of the Republican leadership also met with the two presidents on Wednesday afternoon.

Sen. Ted Cruz R-Texas) agreed that he'd like to see the two countries work even closer but he said there are two issues that must be resolved first: protection of the Kurds and the threat posed to NATO nations by the Turks buying missile systems from Russia.