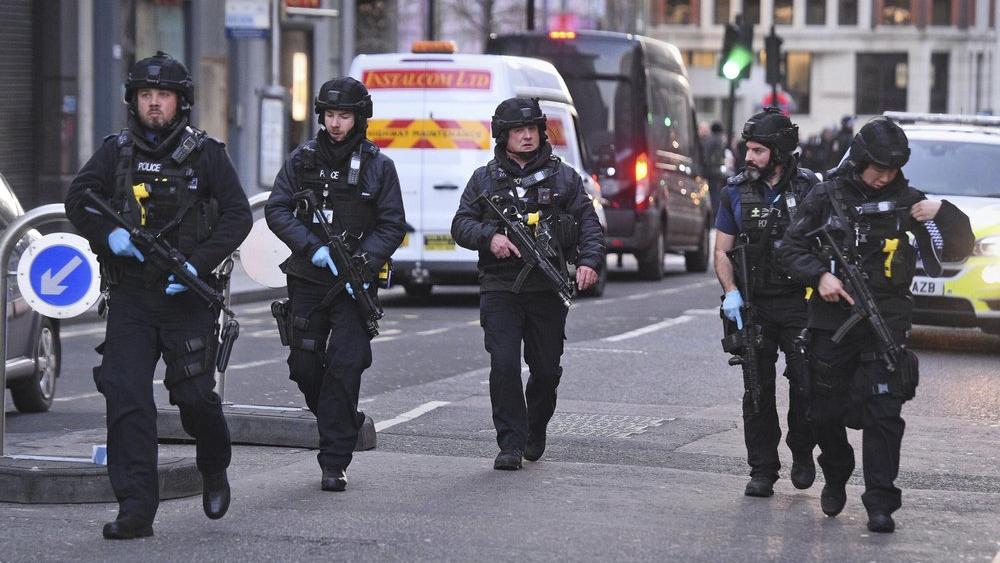 Police on Cannon Street in London near the scene of an incident on London Bridge in central London following a police incident, Friday, Nov. 29, 2019. (AP Photo)

LONDON (AP) — UK counterterrorism police on Saturday searched for clues into how a man imprisoned for terrorism offenses before his release last year managed to stab several people before being tackled by bystanders and shot dead by officers on London Bridge. Two people were killed and three wounded.

Neil Basu, London’s police counterterrorism chief, said 28-year-old Usman Khan was attending a program that works to educate prisoners when he launched Friday’s attack just yards from the site of a deadly 2017 van and knife rampage.

Basu said the suspect appeared to be wearing a bomb vest but it turned out to be “a hoax explosive device.” Police said they were treating the stabbings as a terrorist attack and were not actively looking for other suspects.

Health officials said one of the wounded was in critical but stable condition, one was stable and the third had less serious injuries. Police have not named the two who died.

The attack raises difficult questions for Britain’s government and security services. Police said Khan was convicted in 2012 of terrorism offenses and released in December 2018 “on license,” which means he had to meet certain conditions or face recall to prison. Several British media outlets reported that he was wearing an electronic ankle bracelet at the time of the attack.

Prime Minister Boris Johnson said he had “long argued” that it was a “mistake to allow serious and violent criminals to come out of prison early.” He said extra police patrols on the streets would be added “for reassurance purposes.”

Khan had been convicted as part of a group that denied plotting to target major sites including Parliament, the U.S. Embassy and individuals including Johnson, then the mayor of London, the dean of St. Paul’s Cathedral in London and two rabbis.

Khan admitted to a lesser charge of engaging in conduct for the preparation of acts of terrorism.

He had been secretly taped plotting attacks and talking about martyrdom as a possibility.

Police on Saturday were searching an apartment block in Stafford, 150 miles (240 kilometers) northwest of London, for clues. Khan was believed to have lived in the area after his release from prison.

Britain’s Parole Board said in a statement it had no role in releasing Khan, who “appears to have been released automatically on license (as required by law), without ever being referred to the board,” it said.

The violence erupted less than two weeks before Britain holds a national election Dec. 12. The main political parties suspended campaigning in London as a mark of respect.

Learning Together, a Cambridge University-backed prison education program, was holding a conference at the hall. Cambridge Vice Chancellor Stephen Toope said he was “devastated” to learn that the attack may have targeted people attending an event organized by the university’s Institute of Criminology.

Minutes after the stabbings, witnesses saw a man with a knife being wrestled to the ground by members of the public on the bridge before officers shot him dead.

One video posted on social media showed two men struggling on the bridge before police pulled a man in civilian clothes off a black-clad man on the ground. Gunshots followed. Another depicted a man in a suit holding a long knife that apparently had been taken from the attacker.

Karen Bosch, who was on a bus crossing the bridge, said she saw police “wrestling with one tall, bearded man” and then heard “gunshots, two loud pops.”

She said the man “pulled his coat back which showed that he had some sort of vest underneath, whether it’s a stab vest, or some sort of explosive vest, the police then really quickly moved backwards, away.”

Mayor Sadiq Khan praised the “breathtaking heroism of members of the public who literally ran towards danger not knowing what confronted him.”

Security officials earlier this month had downgraded Britain’s terrorism threat level from “severe” to “substantial,” which means an attack is seen as “likely” rather than “highly likely.” The assessment was made by the Joint Terrorism Analysis Centre, an independent expert body that evaluates intelligence, terrorist capability and intentions.

It was based in part on a judgment that the threat of extremists returning from Syria to launch attacks in Britain had been slightly reduced.

The U.K.’s terror threat was last listed as “substantial” in August 2014; since then it has held steady at “severe,” briefly rising to “critical” in May and September 2017. 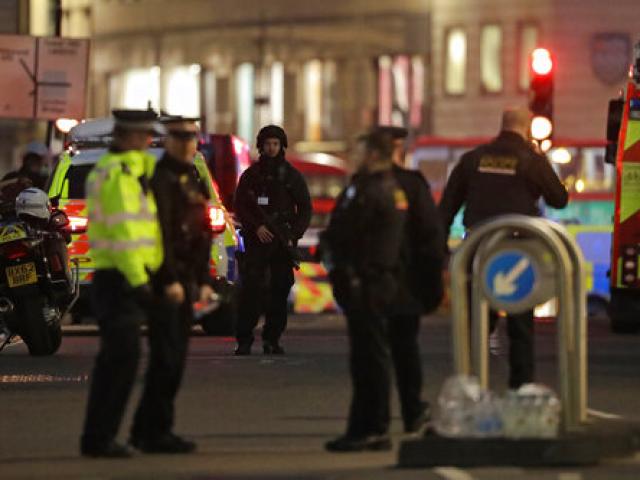