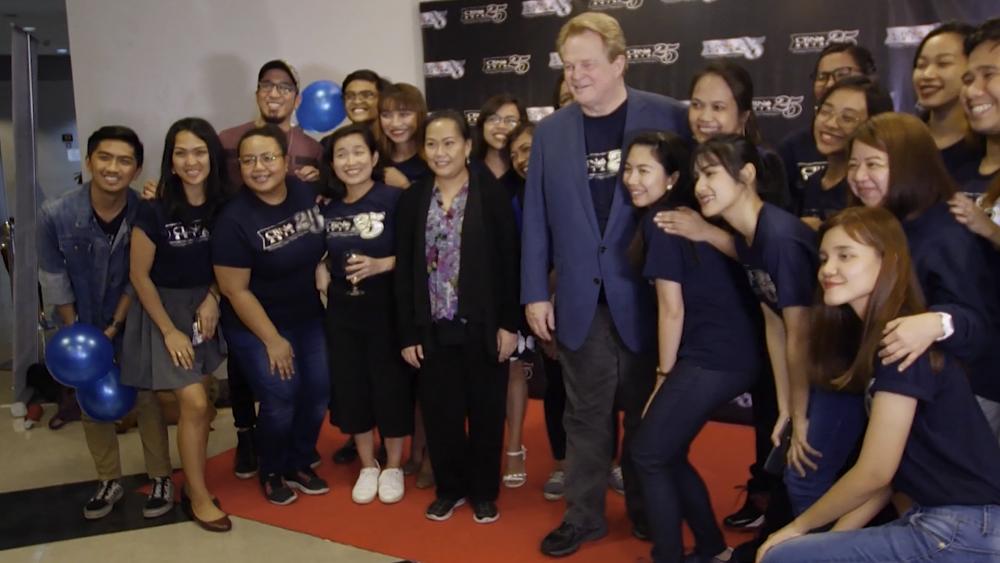 MANILA, PHILIPPINES – In the heart of Manila, the capital city of the Philippines, CBN Asia was birthed 25 years ago.  Today, using a host of multi-media platforms, a thriving prayer and counseling outreach, numerous humanitarian projects around the country and an amazing cross-cultural missions initiative, CBN Asia is positioning itself in Manila and around the country, to reach a whole new generation for Jesus Christ.

A generation that's increasingly addicted to the internet. This year, Filipinos took top spot in the world for most time spent online. The average person in the Philippines spends 10 hours and 2 minutes on the internet every day!

"The landscape has changed a lot and there is more noise now. Real noise. Fake noise. Noise, noise. We really have to speak the truth to cut through the noise," said Sheena Ferrer, who's part of CBN Asia's 211-member team which is creating inspirational content for social media platforms, as well as producing web-based shows that target a tech-savvy generation to cut through that noise.

"Through digital media, we can evangelize, share the gospel online and maximize all of these platforms," she added.

A Different Media Landscape in 1994

It was a different media landscape when Gordon Robertson opened the Manila office in 1994.

"When I first walked in here, the wallpaper was peeling, the ceiling tiles were falling in, there were holes in the carpet and we even had a nest of mice in the ceiling," remembers Malou Ibanez who was part of the team that helped Gordon set up CBN Asia 25 years ago.

"We practically had nothing," Ibanez went on. "We had used furniture, used equipment, a TV set, a Umatic machine that you had to, 'phah, phah,'" she said, making a hand gesture of hitting the machine, "for it to finally run!"

Edwin Arceo was also there during the early days and remembers the financial struggles of establishing a non-profit organization.

"Sometimes, we were crying out for the money to come in. We were holding group prayers at lunchtime and then the challenge would be presented to us and we would really have to pray for it and for miracles to happen," Arceo said.

Established on a Bedrock of Prayer

Mayla Villavicencio, who has been with CBN Asia for 22 years, says miracles DID happen – but only because of prayer.

"Prayer was something that we learned about from Gordon Robertson. I can say that he really established CBN Asia on the bedrock of prayer. Everything we did had to be prayed for, prayed about. We did not do anything without hearing from the Lord," Villavicencio said.

In 1995, after hearing from the Lord through a prophetic word, Gordon launched 700 Club Asia, co-hosting the TV program with well-known Filipino personalities Coney Reyes and Mari Kaimo.

"Both very dedicated Christians who said, 'Yes, we will come', they are fluent in Tagalong, I am not, they are with me on set and I'm going 'Who is the odd man out?' And it's me!" These are skilled professionals, and not me! Gordon said.

Gordon says he remembers the day when he prayed on national television for the first time.

"There was an anointing on it. It was that moment when those phone calls came in that I finally said, 'Ok, God! If you want me on TV, I don't think I'm any good, I don't think I speak well, I don't think I present well, but if you are in it and you are going to anoint it, I'll go along.'"

Millions tuned in to watch the program were prayed for and received salvation.

"Till today, we carry the same mission: proclaiming Christ, transforming lives. It is about Him and Him alone. Only He can change a man's heart."

CBN Asia is today at the forefront of pioneering a host of innovative strategies to reach the nations for Christ.

"It's great to see the explosive growth that has happened here where the seeds you plant, others have come and watered and God has given the increase. It is great to rejoice over that," Gordon said.

On a recent Monday, Gordon, his wife Katharyn, along with Nedra and Scott Ross, joined the staff in the Philippines to celebrate CBN Asia's 25th anniversary. It was a time to reflect on God's faithfulness. It is clear Gordon is among family here.

"People would call Gordon 'Suplado' [which means] a bit aloof and all that. But if you don't know Gordon, you would think he is because he is not chatty as some others are; But as you come to know him you get to feel she starts crying his love for you, he really loves people, he really cares for people – in a quiet way."

Gordon's Special Bond with the People of the Philippines

A special bond was forged during those early years and continues 25 years later.

"I recognize the plan and purposes of God. I recognize that when he called me back to Virginia Beach in 1999 I went kicking and screaming but it was the right thing to do at that time. It's great to come back, it's great to see what they've done but at the same time it's bittersweet because I would love to be here," he said.