Trump Touts Partial Trade Agreement with China but Trump Team Says: 'A Lot of Work to Be Done' 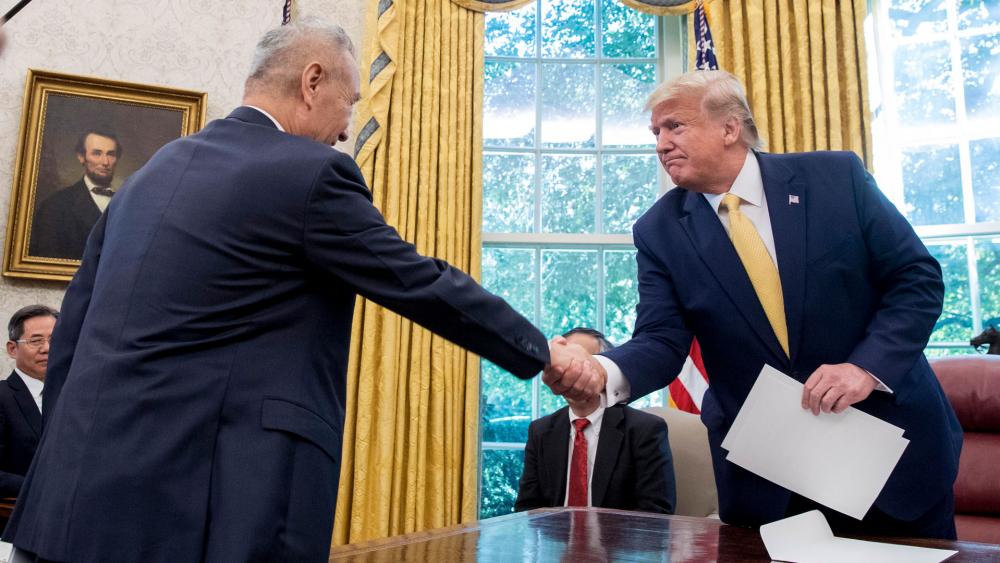 In this Oct. 11, 2019, file photo, U.S. President Donald Trump, right, shakes hands with Chinese Vice Premier Liu He after being given a letter in the Oval Office of the White House in Washington. (AP Photo/Andrew Harnik, File)
6094788915001
Trump Touts Partial Trade Agreement with China, Skeptics of Deal Aren't so Sure

Stephen Moore, a former Trump economic adviser and a distinguished fellow with the Heritage Foundation, appeared on Monday's edition of CBN News' Faith Nation.  Faith Nation is seen weeknights on the CBN News Channel.  Click here for a programming schedule.

President Trump is touting a partial trade deal with China and a temporary peace in a US-China trade war.

"There's nothing bigger than what we're doing with China," the president said. "And we have come to a very substantial phase one deal.

During an Oval Office meeting with the Chinese vice premier on Friday, the president announced phase one of a new trade deal.

The truce means the US will call off planned tariffs in exchange for China agreeing to buy $40 to $50 billion in US agricultural goods.

China says the "result" of ongoing trade talks is "progress."

On Saturday, Trump took to Twitter and tweeted the proposed pact as, "by far, the greatest and biggest deal ever made for our Great Patriot Farmers in the history of our Country."

The Trump administration is suspending a tariff hike on $250 billion in Chinese imports that were set to take effect Tuesday.

The White House said the two sides made some progress on the thornier issues, including China's lax protection of foreign intellectual property. But more work will have to be made on key differences in later negotiations, including US allegations that China forces foreign countries to hand over trade secrets in return for access to the Chinese market.

The US and Chinese negotiators have so far reached their tentative agreement only in principle. No documents have been signed.

Among the skeptics of Friday's agreement is Derek Scissors, a China expert at the American Enterprise Institute, who suggested that the deal amounted to merely a temporary pause in the conflict.

"The president is acting as if a lot of Chinese concessions have been nailed down, and they just haven't," Scissors said.

"We made substantial progress last week in the negotiations," Treasury Secretary Steven Mnuchin said Monday on CNBC. "We have a fundamental agreement. It is subject to documentation, and there's a lot of work to be done on that front."

Mnuchin said he expected that he and US Trade Representative Robert Lighthizer will meet with China's lead negotiator, Vice Premier Liu He, before a November Asia-Pacific summit in Chile. At that gathering, Trump and Chinese President Xi Jinping could officially sign off on a phase one agreement.