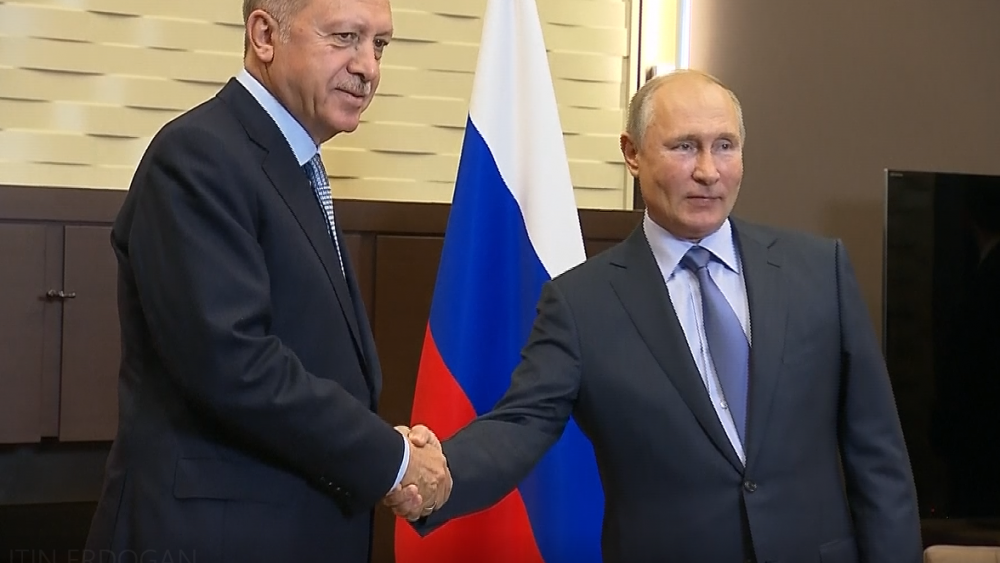 With the ceasefire in Syria ending today, there's concern the Turkish regime will restart their onslaught against the US-allied Kurdish people. But as US troops continue their pullout there's now word that a small force might remain in a remote corner of region.

Ahead of the ceasefire's conclusion, Russian President Putin met with Turkish President Erdogan in Sochi Tuesday, saying Turkey had violated Syrian sovereignty. Russia has helped prop up the tyrannical Syrian regime, so Putin's not happy about Turkey moving troops into Syria.

It comes as US troops were seen leaving northeastern Syria and heading to Iraq on Monday. Their exit was met by angry Kurds throwing potatoes at them. Some held signs thanking the American people but also saying, "Trump betrayed us!"

The US forces might not be welcome in Iraq either, as that government says there's no agreement for them to stay there.

Appearing on the Fox News show Hannity, President Trump said a ceasefire agreement would not have been reached without two and a half days of fighting.

"It's like two kids in a playground. They fight, you let them fight for a minute and then you pull them apart. It was much easier to make a deal," Trump said.

Trump suggests he does not regret his decision to withdraw American troops from Syria.

And at the start of his cabinet meeting Monday, Trump said some residual American troops, maybe 200 or so, would remain inside Syria to protect Israel and Jordan in southern Syria and oil fields in the east.

Secretary of State Mike Pompeo says the US is ready to use military action in the region if necessary.

Some fighting continued in Syria despite the ceasefire. CBN News contributing correspondent Chuck Holton came under fire inside Syria as he and medics of the Free Burma Rangers  rescued wounded Kurds.

"We have been moving down the road into territory that has been held by the Free Syria Army right now. An hour ago they shot at us with three machine guns and we had to flee and now we're close, we're going right back," Holton explained.

Under terms of the ceasefire, the Kurds have agreed to leave a safe zone south of the Turkish border. Turkey's Erdogan says only 800 Kurdish fighters have left the area while 1,300 allegedly remain. Turkish Foreign Minister Mevlüt Çavuşoğlu warned Kurdish militias must honor the agreement.

"If they don’t withdraw, our operation will restart," he insisted.

The challenge now is reaching a permanent deal. Since the Turkish military offensive, Operation Peace Spring, began October 9, more than 150,000 people have fled the fighting in northern Syria. Hundreds if not thousands have been killed, or injured.

CBN's Operation Blessing is helping many of the internally displaced inside northeast Syria, and more than 10,000 refugees have now crossed into Iraqi Kurdistan. OB is partnering with the Barzani Charitable Trust Foundation to provide hot meals to people in two camps there.

And the German defense minister today suggested the security zone in northern Syria be controlled by the international community including Russia and Turkey.