100,000+ Cheer for Trump as He Speaks to His Biggest Crowd Ever During Visit to India 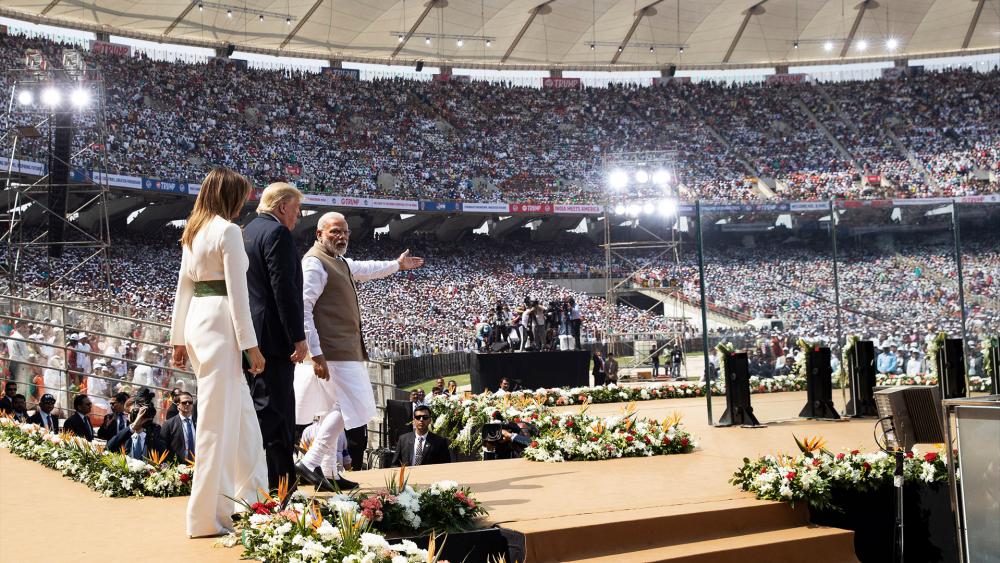 President Donald Trump was greeted with loud cheering as he spoke to the largest crowd ever in his political career during a visit to India on Monday.

He's making a quick 36-hour visit to the country, speaking to more than 100,000 people at Motera Stadium in Ahmedabed.

President Trump and India Prime Minister Narendra Modi both spoke at the event, praising each other. They also talked about strengthening US-India trade ties which have been strained by trade disputes.

Outside the massive stadium there were rallies of supporters and protestors for President Trump who was greeted on the inside to massive cheers – observers say it provided "enviable overseas imagery" for the president during this election year.

Almost everyone at the stadium wore a white cap with the words, "Namaste, Trump" or "Welcome, Trump," and cheered when both leaders were introduced.

During his opening speech, Trump announced he had traveled 8,000 miles to tell the crowd that "America loves India, America respects India and America will be faithful and loyal friends to the Indian people."

The president will wrap up his visit to India on Tuesday in the capital where he will meet with Modi over trade talks and dinner. The US and India are closely associated, partly as a safeguard against the growing influence of China.

Trade tensions between the two countries increased after the Trump administration enforced tariffs on steel and aluminum from India.

India responded with higher penalties on agricultural goods and restrictions on US medical equipment. The US responded by removing India from a decades-old trade program.

But Trump announced at the stadium that India would spend billions of dollars for American military equipment.

"I am pleased to announce that tomorrow our representatives will sign deals to sell over $3 billion in the absolute finest state of the art military helicopters and other equipment to the Indian armed forces," Trump said.

Also he offered his optimistic predictions on poverty and the future of India.

"India will soon be the home of the biggest middle class anywhere in the world," Trump said. "And within less than 10 years, extreme poverty in your country is projected to completely disappear. The potential for India is absolutely incredible."

President Trump concluded his speech on a positive note adding, "God bless India. God bless the United States of America. We love you. We love you, India, very much. Thank you."

After leaving the stadium, Trump and First Lady Melania visited the Taj Mahal and strolled around the grounds of India's most famous attractions.

Upon landing in Ahmedabad, @POTUS @realDonaldTrump and @FLOTUS @MELANIATRUMP went to Sabarmati Ashram.

The path and ideals of Mahatma Gandhi are not only globally popular but also very relevant in today’s times. pic.twitter.com/FyH1sOrhrn