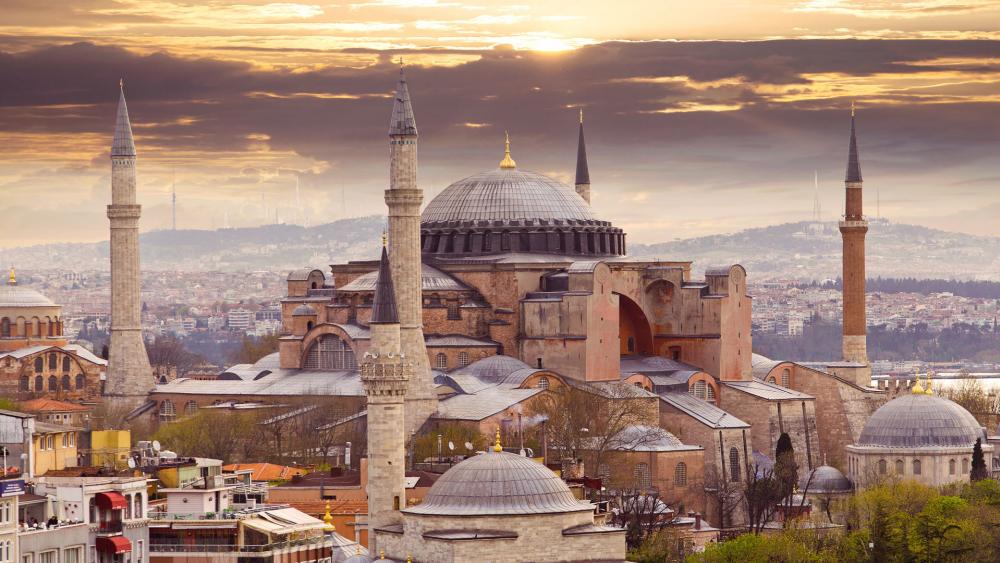 A Turkish court is expected to decide on July 2 if the iconic Byzantine-era structure will become a place for Muslim worship at the behest of Turkish President Recep Tayyip Erdogan. Built in 537 AD, the cathedral served as the seat of the archbishop of Constantinople until 1453, when Constantinople was conquered by the Ottoman Empire under Mehmet the Conqueror. The Turkish sultan ordered the church to be converted into a mosque and the cathedral’s Christian features were destroyed or covered and replaced with Islamic emblems.

The Hagia Sophia remained a mosque until 1935, when Mustafa Kemal Ataturk, the first Turkish president and the founder of modern Turkey, secularized the structure, transforming it into a museum and prohibited the complex from being used as a place of worship.

Erdogan has long desired to change the status of the complex and make it a new center for Islamic worship in Turkey. In March, he celebrated the 567th anniversary of the Ottoman conquest of Istanbul with an Islamic prayer dedicated to Mehmet the Conqueror. However, Hagia Sophia is a UNESCO World Heritage site and a change in status must be approved by the World Heritage Committee.

Mustafa Destici, leader of the Grand Unity Party (BBP), told reporters that Hagia Sophia “is a symbol of conquest.”

"In our opinion, the reopening of Hagia Sophia, far from being just a necessity and laying claim to a relic of conquest, is an issue of sovereignty and independence," Destici said.

“The Hagia Sophia holds enormous spiritual & cultural significance to billions of believers of different faiths around the world,” said Sam Brownback, the US State Department’s ambassador for religious freedom said in a tweet.

“We call on the Government of Turkey to maintain it as a UNESCO World Heritage site and to maintain accessibility to all in its current status as a museum.”

Patriarch Bartholomew I of Constantinople, the Ecumenical Patriarch of the Greek Orthodoxy, said he is “saddened and shaken.”

Critics of the move argue that there is already a room in Hagia Sophia where Muslims pray and worship, and the decision to convert the museum into a mosque again is largely symbolic. Experts argue that Erdogan is considering the move to gain popularity among religious hardliners in his country and detract from Turkey’s economic woes.

However, Armenian Patriarch Sahak II, a resident of Istanbul, supports the move.

“I believe that believers’ praying suits better the spirit of the temple than curious tourists running around to take pictures,” the Christian leader tweeted.

“The site is large enough to allocate a space for Christians, [so that] the world can applaud our religious peace and maturity.”

The Armenian Apostolic Orthodox Church is Turkey’s largest Christian community with some 90,000 members.

“We survived for 17 centuries and we will stay here forever, as God wants us to.”