Another Tropical Depression May Brew in Atlantic Basin This Week 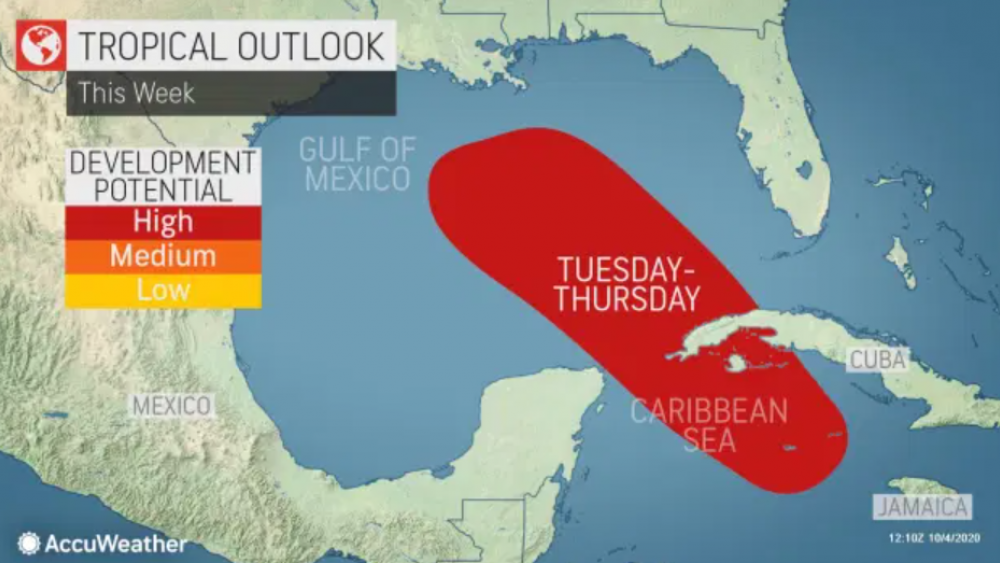 While Tropical Storm Gamma continues to meander on the northern coast of the Yucatan Peninsula, another tropical feature could be brewing in the region.

A tropical low, moving through the Caribbean Sea on Sunday, is expected to be pulled northward into the northwestern Caribbean or the central Gulf of Mexico into midweek.

This tropical low will follow close behind Gamma but is likely to take a different track and continue northward. Still, Gamma could influence whether this next tropical feature is able to strengthen.

"Gamma is sending a rich plume of tropical moisture across most of the central and eastern Gulf of Mexico this weekend, where there is also an area of lower wind shear," said AccuWeather Meteorologist Matt Benz.

These conditions may provide a window of time for this tropical low to strengthen into a tropical depression, on even a tropical storm, during the middle of the week.

Following the Greek alphabet, the next tropical storm in the Atlantic Basin would gain the name Delta, and become the 25th named tropical storm of the 2020 Atlantic season.

Even without reaching tropical-storm strength, this feature is expected to make an impact.

A tropical low would still bring waves of heavy, tropical rain across portions of western Cuba, and perhaps even parts of the Yucatan Peninsula of Mexico in the coming days. These same areas have already been hit by flooding rainfall from a stalled front and Gamma over the past week.

This tropical low's closeness to Gamma might also ultimately determine where it will go after emerging in the Gulf of Mexico.

Even factoring in the Fujiwhara effect, the new tropical feature in the Gulf of Mexico is likely to bring it's tropical moisture northward into the United States late in the week.

"Whether a tropical storm develops or not, the plume of tropical moisture from this feature will be strung northward, and focused somewhere along the United States Gulf Coast later this week," added Benz.

The mainly dry weather that has held along the central Gulf Coast thus far in October will be replaced with heavy, tropical downpours late in the week and next weekend. The exact track of the tropical feature will determine where the heaviest rain will fall. But all the locations along the Gulf Coast from Houston, Texas to Tampa, Florida, have been impacted by land-falling tropical systems already this season.

Some landfalls have been more recent, like Hurricane Sally that made landfall as a Category 2 hurricane on Sept. 16, in Gulf Shores, Alabama. Less than a week later, Tropical Storm Beta made landfall on the Matagorda Peninsula of southeastern Texas, near the Texas-Louisiana border. Both systems brought drenching rainfall and flooding.

As such, residents along the entirety of the United States Gulf Coast should continue to check back with AccuWeather as forecasters monitor this tropical feature. A change in track could shift the area of greatest flood threat, and a change in intensity could bring damaging winds to the Gulf Coast beaches.

A storm nearing the U.S. Gulf Coast also has the potential to disrupt natural gas and oil production in that area, perhaps for several days depending on the forward speed of the tropical feature.

Several other features across the Atlantic Basin are being monitored by AccuWeather meteorologists.

One such area is a tropical feature east of Bermuda and is forecast to move southwestward this week. At the same time, a tropical wave located in the center of the Atlantic is likely to move westward, approaching the Lesser Antilles by midweek. The above satellite image shows Gamma in the Gulf of Mexico as well as a new tropical low in the Caribbean Sea. Several other tropical features are visible elsewhere across the Atlantic Basin (NOAA/GOES-East).

Tropical season in the Atlantic Basin officially ends on Nov. 30, but climatologically, the number of named tropical systems in the basin usually drops off significantly during the month of November.