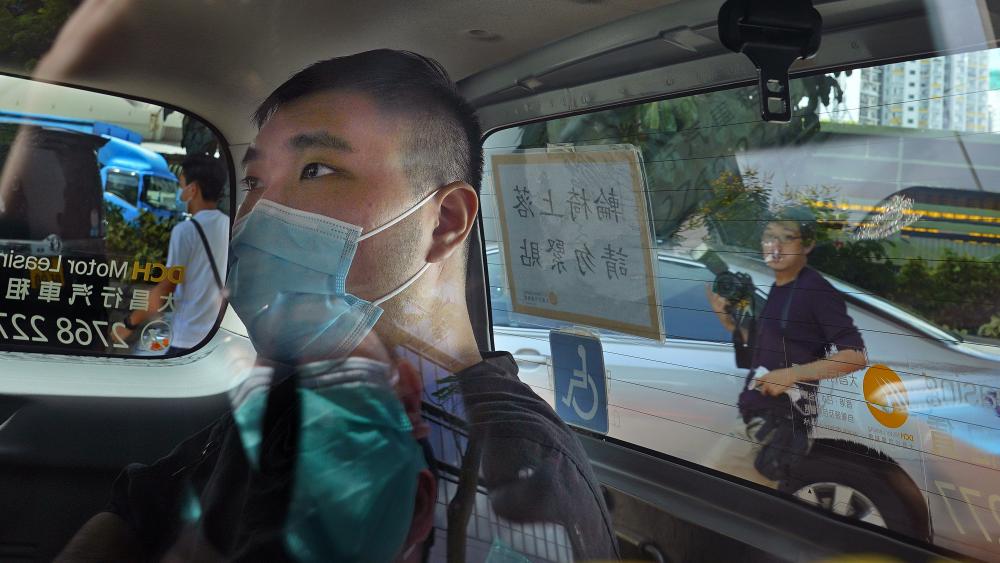 FILE - In this July 6, 2020, file photo, Tong Ying-kit arrives at a court in a police van in Hong Kong. (AP Photo/Vincent Yu,File)

HONG KONG (AP) — The first person to be tried under Hong Kong’s sweeping national security law was found guilty of secessionism and terrorism on Tuesday in a ruling closely watched for indications of how the law will be applied as China tightens its grip on the city long known for its freedoms.

Tong Ying-kit was charged with inciting secession and terrorism for driving his motorcycle into a group of police officers last year while carrying a flag bearing the banned protest slogan “Liberate Hong Kong, revolution of our times.” Rights groups condemned his conviction, and many are bracing for further such trials since more than 100 people have been arrested under the legislation — part of Beijing's increasing crackdown on dissent in Hong Kong following months of anti-government protests in 2019.

Tong, a 24-year-old restaurant worker, pleaded not guilty to the charges, arguing the slogan itself does not call for secession. He now faces a maximum sentence of life imprisonment, but his lawyers are expected to argue for a lighter punishment at his sentencing hearing Thursday.

The new national security legislation not only resulted in the charges against Tong, but it also spelled out how the trial would be conducted. The proceedings, which ended July 20, were held in the Hong Kong High Court with no jury, under rules allowing the exception from Hong Kong’s common law system if state secrets need to be protected, foreign forces are involved or if the personal safety of jurors needs to be protected. Trials are presided over by judges handpicked by Hong Kong leader Carrie Lam.

Reading the verdict, Justice Esther Toh said Tong “committed terrorist activities causing or intended to cause grave harm to the society” in pursuit of a political agenda.

His behavior was an act of violence aimed at coercing the central and Hong Kong governments and intimidating the public and carrying the flag constituted an act of incitement to secession, she said.

Tong did not speak during the reading of the verdict. He waved to his parents and others in the gallery as he was escorted from the chamber.

Tong’s defense lawyer has said it’s impossible to prove that Tong was inciting secession merely by having used the slogan.

The defense also said there is no evidence that Tong committed the act deliberately, that he tried to avoid crashing into officers and that his actions couldn’t be considered terrorism since there was no serious violence or harm to society.

The verdict was immediately condemned by Amnesty International, which called it “the beginning of the end for freedom of expression in Hong Kong."

“People should be free to use political slogans during protests, and Tong Ying-kit should not be punished for exercising his right to free speech," Asia-Pacific Regional Director Yamini Mishra said in an emailed statement. “It is particularly clear that he should never have been charged with a ‘national security’ offense carrying a possible life sentence.”

Beijing has dismissed criticisms, saying it is merely restoring order to the city and instituting they same type of national security protections found in other countries.