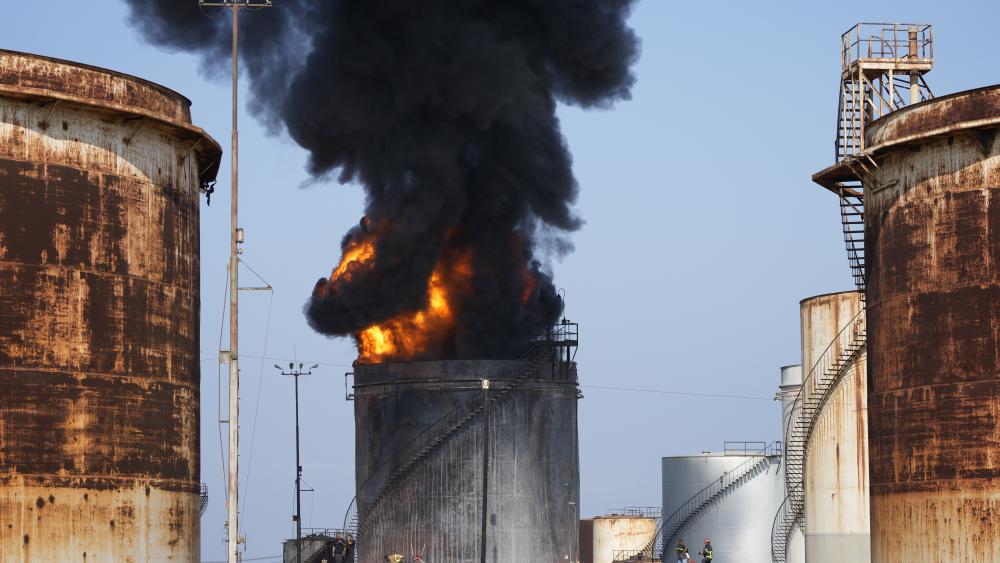 ZAHRANI, Lebanon (AP) — Firefighters extinguished a huge blaze that broke out in a storage tank at one of Lebanon's main oil facilities in the country's south Monday after it sent orange flames and a thick black column of smoke into the sky.

Energy Minister Walid Fayad said the fire broke out when workers were transferring gasoline from one storage tank to another in the coastal town of Zahrani. He said nearly 250,000 liters of gasoline were burnt during the blaze, which lasted more than three hours. No one was reported hurt.

The fire came as cash-strapped Lebanon struggles through a serious power crisis partly due to severe shortages in fuel that has resulted in electricity cuts lasting up to 22 hours a day.

“The situation now is almost under full control,” Fayad told reporters at the facility. He said earlier that the storage tank was for the Lebanese army.

State-run National News Agency said it was not immediately clear what caused the fire.

Lebanese troops had closed the highway linking Beirut with southern Lebanon that passes through Zahrani. The road was reopened after the fire was extinguished.

The Zahrani Oil Installation is about 50 kilometers (30 miles) south of Beirut. It is close to one of Lebanon’s main power stations, which stopped functioning two days ago due to a fuel shortage.

Earlier in the day, the head of the civil defense, Raymound Khattar, told the local MTV station that they believe there were 300,000 liters of gasoline in the tanker. Khattar added that work focused on extinguishing the fire and cooling down a nearby tanker, to keep it from igniting.

In August 2020, a blaze at Beirut’s port triggered a massive explosion that killed at least 215 people, wounded thousands and destroyed the facility and nearby neighborhoods. The blast at Beirut’s port, one of the largest non-nuclear explosions ever reported, was caused by hundreds of tons of ammonium nitrate, a highly explosive material used in fertilizers that had been improperly stored for years.

The material has been stored at the facility since the 1950s, when it was run by the Mediterranean Refinery Company, or Medreco. Medreco was an American company whose main shareholders were Mobil and Caltex and it was active in Lebanon for four decades until the late 1980s.