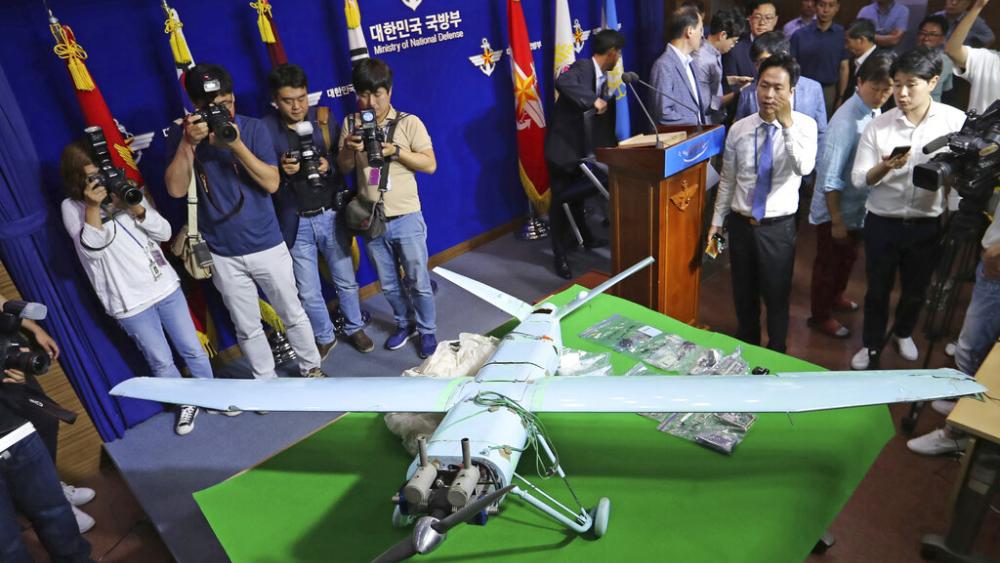 A suspected North Korean drone is viewed at the Defense Ministry in Seoul, South Korea, on June 21, 2017. (Lee Jung-hoon/Yonhap via AP, File)

South Korea's military detected five drones from North Korea crossing the border, and one traveled as far as the northern part of the South Korean capital region, which is about an hour's drive away, South Korea's Joint Chiefs of Staff said.

The military responded by firing warning shots and launching fighter jets and attack helicopters to shoot down the North Korean drones. The attack helicopters fired a combined 100 rounds but it wasn't immediately known if the North Korean drones were shot down. There were no immediate reports of civilian damage on the ground in South Korea, according to the Defense Ministry.

The North Korean drones and the swift response from the South came days after the North fired two short-range ballistic missiles in the latest in its torrid run of weapons tests this year. Friday's launches were seen as a protest of the South Korean-U.S. joint air drills that North Korea views as an invasion rehearsal.

One of the South Korean fighter jets scrambled on Monday, a KA-1 light attack plane, crashed during takeoff but its two pilots both ejected safely, defense officials said. They said they also requested civilian airports in and near Seoul to halt takeoffs temporarily.

South Korea also sent surveillance assets near and across the border to photograph key military facilities in North Korea as corresponding measures against the North Korean drone flights, the Joint Chiefs said. It didn't elaborate, but some observers say that South Korea likely flew unmanned drones inside North Korean territory.

"Our military will thoroughly and resolutely respond to this kind of North Korean provocation," Maj. Gen. Lee Seung-o, director of operations at the South Korean Joint Chiefs of Staff, told reporters.

South Korea's public confirmation of any reconnaissance activities inside North Korea is highly unusual and likely reflects a resolve by the conservative government led by President Yoon Suk Yeol to get tough on North Korean provocations. North Korea could respond with more fiery rhetoric or weapons tests or other provocations, some observers say.

North Korea has previously touted its drone program, and South Korean officials said the North has about 300 drones. In 2014, several suspected North Korean drones equipped with Japanese-made cameras were found south of the border. Experts said they were low-tech but could be considered a potential security threat.

Earlier this month, North Korea claimed to have performed major tests needed to acquire its first spy satellite and a more mobile intercontinental ballistic missile capable of reaching the U.S. mainland. They were among the high-tech weapons systems that North Korean leader Kim Jong Un has vowed to introduce along with multi-warheads, underwater-launched nuclear missiles, nuclear-powered submarines, and hypersonic missiles.

North Korea released low-resolution photos of South Korean cities as viewed from space, but some experts in South Korea said the images were too crude for surveillance purposes. Such assessments infuriated North Korea, with Kim's powerful sister Kim Yo Jong issuing a series of derisive terms to insult unidentified South Korean experts and express her anger.

North Korea is to hold a key ruling Workers' Party conference this week to review past policies and set policy goals. Some experts say that during the meeting, North Korea will likely reaffirm its push to bolster nuclear and missile arsenals to cope with what it calls hostile U.S. policies, such as U.S.-led international sanctions and its regular military training with South Korea.

North Korea would eventually use its boosted nuclear capability as a bargaining chip to win international recognition as a legitimate nuclear state, the relaxing of international sanctions and other concessions, analysts say. 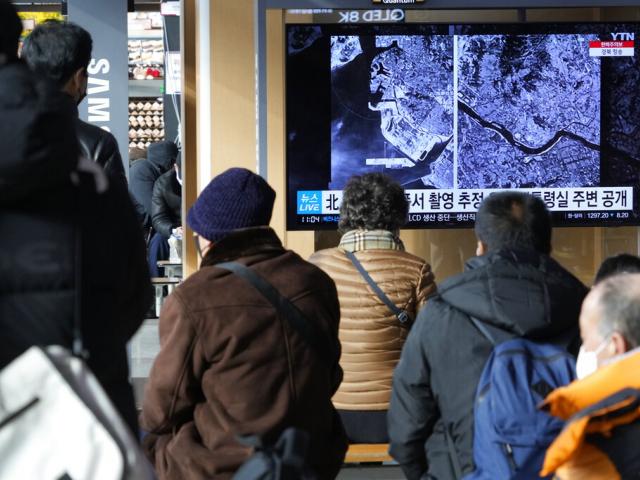