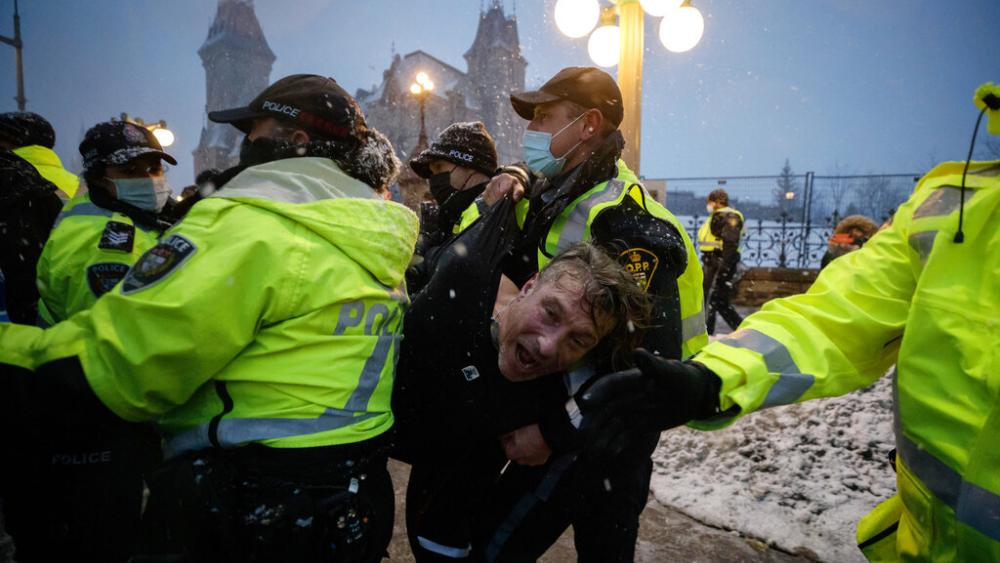 A man is arrested by police as protesters and supporters gather as a protest against COVID-19 measures. (Cole Burston/The Canadian Press via AP)

OTTAWA, Ontario (AP) — Hundreds of truckers clogging Canada’s capital stood their ground and defiantly blasted their horns Thursday, even as police arrested two protest leaders and threatened to break up the nearly three-week protest against the country’s COVID-19 restrictions.

Busloads of police arrived near Ottawa's Parliament Hill, and workers put up extra fences around government buildings. Police also essentially began sealing off much of the downtown area to outsiders to prevent them from coming to the aid of the protesters.

“The action is imminent,” said interim Ottawa Police Chief Steve Bell. “We absolutely are committed to end this unlawful demonstration."

Police arrested organizers Tamara Lich and Chris Barber around Parliament Hill, but officers were not moving in force on the demonstrators. Police took Lich into custody late Thursday.

Police continued negotiating with the protesters and trying to persuade them to go home, Bell said. “We want this demonstration to end peacefully,” he said, but added: “If they do not peacefully leave, we have plans.”

Many of the truckers in the self-styled Freedom Convoy appeared unmoved by days of warnings from police and the government that they were risking arrest and could see their rigs seized and bank accounts frozen.

“I’m prepared to sit on my (expletive) and watch them hit me with pepper spray,” said one of their leaders, Pat King. As for the trucks parked bumper-to-bumper, he said: “There’s no tow trucks in Canada that will touch them.”

Amid the rising tensions, truckers outside Parliament blared their horns in defiance of a court injunction against honking, issued for the benefit of neighborhood residents.