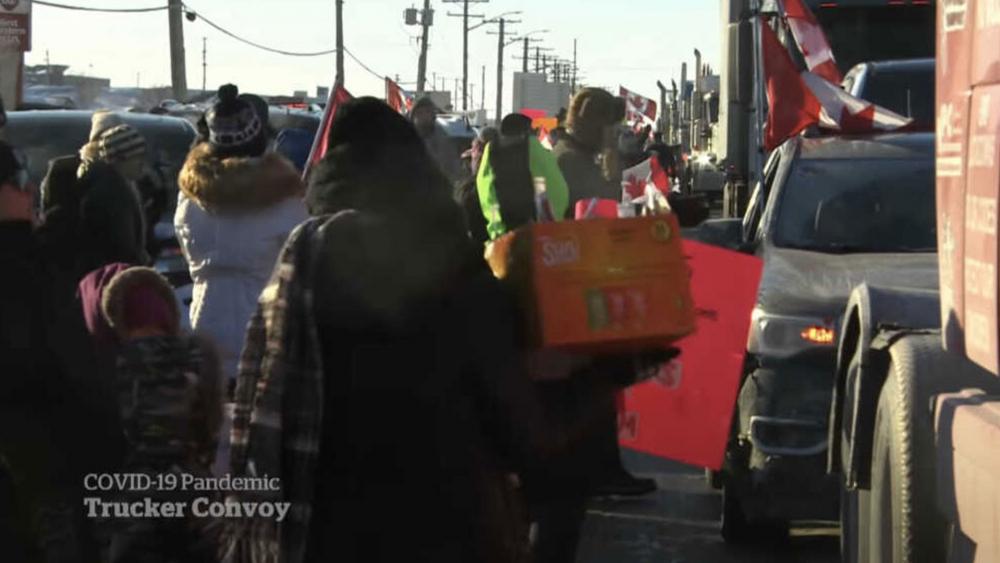 A large group of Canadian truckers protesting vaccination mandates could form the world’s largest convoy on their way to the country’s capital city, Ottawa.

The Toronto Sun’s Joe Warmington wrote that, according to Guinness World Records, the longest recorded truck convoy was a little more than 4.5 miles in Egypt in 2020. The so-called “Freedom Convoy,” traveling from British Columbia to Ottawa, “is said to be considerably longer,” he wrote.

While more than 85% of Canada’s 120,000 truck drivers who regularly cross into the U.S. are vaccinated against COVID-19, as many as 16,000 could be sidelined as a result of new vaccination restrictions put in place in Canada and by President Joe Biden’s administration.

Many truckers are participating in the protest after Canada’s Jan. 15 deadline forcing unvaccinated drivers to commit to two weeks of isolation and submit negative COVID-19 tests before being allowed back into the northern country.

Additionally, the Biden administration implemented new restrictions beginning Jan. 22, forcing non-U.S. citizens entering the country at the Canadian border to show proof of vaccination before being permitted to come into the United States.

These new restrictions will apply to non-U.S. individuals who are traveling for both essential and non-essential reasons.

They will not apply to U.S. citizens, Lawful Permanent Residents, or U.S. nationals.

According to CBC News, more than 1,000 supporters braved dangerously cold temperatures to greet the convoy as it passed through Headingly, Manitoba, en route to Ottawa.

The convoy has been causing severe traffic problems — forcing people to be stuck on the highway for more than an hour at times — most, though, don’t seem to mind because they support the cause.

Robert Jorgenson, a trucker from Winnipeg, joined the drivers, telling CBC he plans to travel with the convoy to Canada’s capital city.

See The Convoy below:

“This isn’t even about a vaccine anymore,” he said. “It’s not. It’s not about a vaccine mandate on truckers. I have been free my whole life, and, somehow, now, I’m not. This is Canada.”

Another supporter, Salvatore Vetro, who isn’t even a truck driver, has followed the demonstrators as a show of his support for the cause. He said he is “not an extremist” but vowed to remain in Ottawa until Canadian Prime Minister Justin Trudeau puts an end to the country’s vaccination requirements.

Every overpass is filled with people just like this one. The convoy has just started, and Justin Trudeau is not nearly as concerned as you should be. #TruckersForFreedom pic.twitter.com/5LTFv4WGCr

Crowd cheering on the freedom trucker convoy in Winnipeg, Manitoba, Canada as it makes it’s way to Ottawa to protest mandates and restrictions in the country. pic.twitter.com/jHvoOluY17

Trevor Gatchell, who has assisted truckers by giving them food, water, and windshield washer fluid, said he is supporting the drivers “because I want the right to choose for myself as well,” adding, “I’m not anti-vax or anything like that. I want to be able to make my own choice.”

“We’re tired of too [much] dividing people — vaxxed people to unvaxxed people,” he said. “That’s not supposed to happen. … We’re all one. We’re all in this together. It needs to stop right now.”

As of Wednesday morning, the convoy was leaving Kenora, Ontario, heading to Thunder Bay.

A GoFundMe account set up by convoy organizers has raised more than $5.3 million. However, according to The Canadian Press, the crowd-funding site is withholding the cash until a clear plan is presented as to how the money will be used.

Rachel Hollis, a spokesperson for GoFundMe, told the outlet, “We require that fundraisers be transparent about the flow of funds and have a clear plan for how those funds will be spent. In this case, we are in touch with the organizer to verify that information.”

“Funds,” she continued, “will be safely held until the organizer is able to provide the documentation to our team about how funds will be properly distributed.”

The concern, though, is that the truckers will need access to the money — in order to pay for needed supplies, like food, water, and gasoline — before it’s released.

In the description for the GoFundMe account, the organizers asserted the government “is implementing rules and mandates that are destroying the foundation of our businesses, industries, and livelihoods,” adding, “Canadians have been integral to the fabric of humanity in many ways that have shaped the planet.”

“We are a peaceful country that has helped protect nations across the globe from tyrannical governments who oppress their people, and now it seems it is happening here,” the organizers continued. “We are taking our fight to the doorsteps of our federal government and demanding that they cease all mandates against its people. Small businesses are being destroyed, homes are being destroyed, and people are being mistreated and denied fundamental necessities to survive.”

The organizers clearly state in the description that any donations made to the account will be used “to help with the costs of fuel first, and hopefully food and lodgings to help ease the pressures of this arduous task.”

All of this, it should be noted, comes amid a serious supply chain issue in the U.S. and in Canada.

While the Canadian Trucking Association has condemned the “Freedom Convoy,” the CEO of the Transportation Intermediaries Association, Anne Reinke, has voiced concerns about placing restrictive mandates on truckers when the economy is in dire straits.

“Americans are struggling with higher prices and scarce goods, at the grocery store, the gas pump, and diners across the country,” she said, according to Trucking Info. “One way to make this drastically worse overnight is to take tens of thousands of truck drivers and forbid them from entering the country, leaving countless amounts of essential freight at the doorstep of our country.”

Kevin Hassett, who served as an economics adviser to former President Donald Trump, told Fox News this week that the Biden administration’s restrictive policies could cause irreparable damage to supply chains.

“The fact is that they keep saying it’s a supply chain crisis, it’s a temporary thing,” he said. “But … there are these liberal policies all across the country that are leading to kind of a permanent negative shock to supply. … It’s astonishing how much the supply disruption is affecting everybody’s lives, and what the Biden administration is doing is they’re pushing harder on the liberal policies.”

He went on to warn that the continuation of these policies will result in “double-digit inflation.”