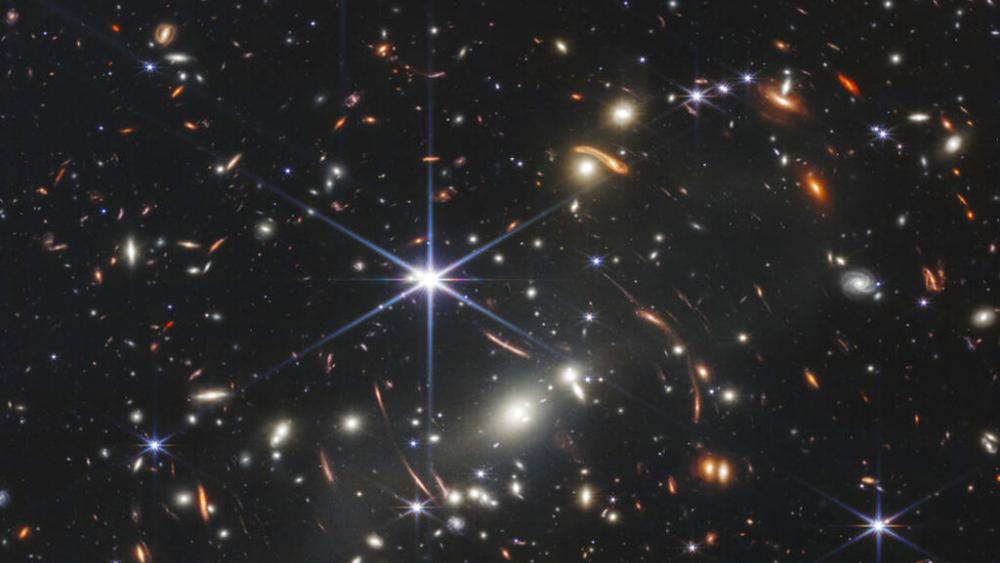 (AP) - Our view of the universe just expanded: The first image from NASA’s new space telescope unveiled Monday is brimming with galaxies and offers the deepest look of the cosmos ever captured.

The first image from the $10 billion James Webb Space Telescope is the farthest humanity has ever seen in both time and distance, closer to the dawn of time and the edge of the universe. That image will be followed Tuesday by the release of four more galactic beauty shots from the telescope’s initial outward gazes.

The dawn of a new era in astronomy has begun as the world gets its first look at the full capabilities of the NASA/ESA/CSA James Webb Space Telescope. The telescope’s first full-colour images & spectroscopic data were released today. Read more here https://t.co/kdD6ew5306 or pic.twitter.com/BXYYHq8yY9

The “deep field" image released at during a brief White House event is filled with lots of stars, with massive galaxies in the foreground and faint and extremely distant galaxies peeking through here and there. Part of the image is light from not too long after the Big Bang, which was 13.8 billion years ago.

*Editor's note: The science writer for the Associated Press in this article credits the Big Bang theory with creation, which of course Christians understand was God moving to create the universe and everything in it. Further, Christians disagree on the age of the earth/universe, with some saying it's around 6,000 years old while others believe in an older universe. The main reason for sharing this article from AP is to marvel at God's glory, power and majesty. Amazing!

Better together. International collaboration gave us the most powerful space telescope ever made, and the deepest infrared views of the universe ever seen. With our partners at @ESA and @CSA_ASC, the science can begin. Together we #UnfoldTheUniverse: https://t.co/oFA1ja4jeP pic.twitter.com/8TXTZEIb6H

President Joe Biden marveled at the image that he said showed “the oldest documented light in the history of the universe from over 13 billion -- let me say that again -- 13 billion years ago. It’s hard to fathom.”

The busy image with hundreds of specks, streaks, spirals and swirls of white, yellow, orange and red is only “one little speck of the universe,” NASA Administrator Bill Nelson said.

“What we saw today is the early universe,” Harvard astronomer Dimitar Sasselov said in a phone interview after the reveal.

Sasselov said he and his colleague Charles Alcock first thought “we’ve seen this before." Then they looked closer at the image and pronounced the result not only beautiful but "worth all that waiting” for the much-delayed project.

And even more is coming Tuesday. The pictures on tap include a view of a giant gaseous planet outside our solar system, two images of a nebula where stars are born and die in spectacular beauty and an update of a classic image of five tightly clustered galaxies that dance around each other.