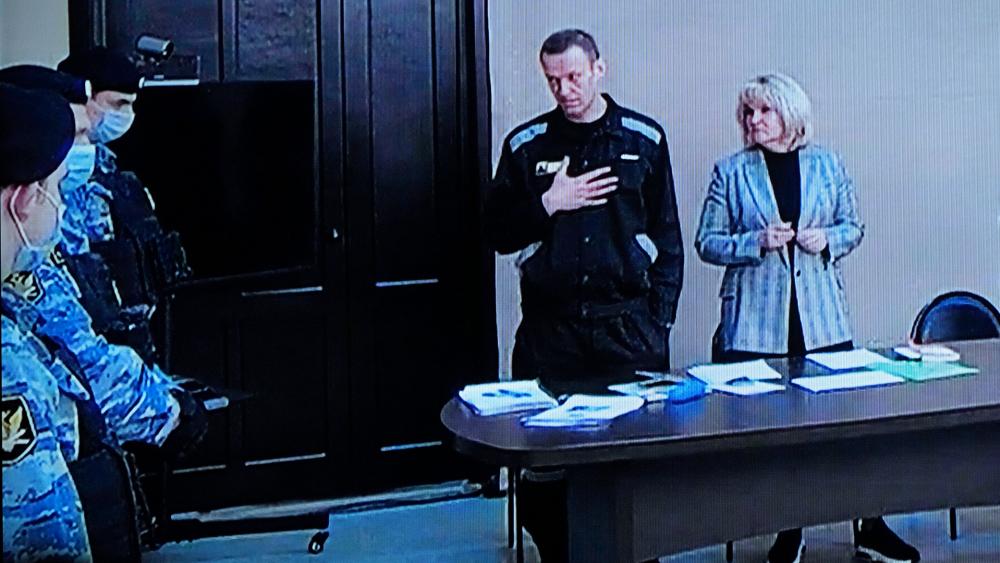 MOSCOW (AP) - A Russian court on Tuesday convicted top opposition leader Alexei Navalny of fraud and contempt of court, sentencing him to nine more years in prison in a move that was seen as an attempt to keep President Vladimir Putin’s biggest foe behind bars for as long as possible.

The new sentence follows a year-long crackdown by Putin on Navalny's supporters, other opposition activists, and independent journalists in which authorities appear eager to stifle all dissent.

Navalny's close associates have faced criminal charges and left the country, and his group's political infrastructure - an anti-corruption foundation and a nationwide network of regional offices - has been destroyed after being labeled an extremist organization.

The 45-year-old Navalny, who in 2020 survived poisoning with a nerve agent that he blames on the Kremlin, is already serving 2½ years in a penal colony east of Moscow for a parole violation. The new trial was held in a makeshift courtroom at the facility.

In a Facebook post by his team shortly after the sentence, the usually sardonic Navalny said: “My space flight is taking a bit longer than expected.”

He added that neither he nor his comrades "will simply wait,” announcing that his Anti-Corruption Foundation will become an international organization that will “fight (Putin) until we win.”

“We will find all of their mansions in Monaco, their villas in Miami, their riches everywhere - and when we do, we will take everything from the criminal Russian elite,” the foundation's new website said.

His new conviction is on charges of embezzling money that he and his foundation raised over the years and of insulting a judge during a previous trial. Navalny, who will appeal the ruling, has rejected the allegations as politically motivated.

It wasn’t immediately clear whether he must serve the new nine-year sentence in addition to the 2½ years, or where he will serve it. Prosecutors originally asked for a 13-year sentence. The judge also imposed a fine of 1.2 million rubles (about $11,500).

Navalny’s Twitter account responded to the nine-year sentence by citing “The Wire” television series: “Well, as the characters of my favorite TV series ‘The Wire’ used to say: ‘You only do two days. That’s the day you go in and the day you come out.’ I even had a T-shirt with this slogan, but the prison authorities confiscated it, considering the print extremist.”

Even his lawyers, Olga Mikhailova and Vadim Kobzev were detained shortly after they commented to reporters on the ruling, although Mikhailova told the Medizona news outlet that the police let them go without any charges.

Navalny’s supporters criticized the decision to move the trial, which opened about a month ago, to the prison, instead of holding it in Moscow. They said it effectively limited access to the proceedings for the media and supporters.

He appeared at hearings in prison garb and made several elaborate speeches, decrying the charges as bogus.

Navalny fell ill while on a domestic flight in 2020 and was diagnosed with being poisoned by a chemical nerve agent Novichok, although Russian officials vehemently denied his accusations that they had any role. He was transferred for treatment to Germany, where he recovered for five months.

He was arrested upon returning to Russia in January 2021, triggering the biggest protests seen in the country in recent years. The next month, a Moscow court ordered him to prison for violating terms of his parole on a 2014 embezzlement conviction that the European Court of Human Rights deemed to be “arbitrary and manifestly unreasonable.”

Authorities then unleashed the sweeping crackdown on his organization, associates, and supporters. Last month, Russian officials added him and a number of his colleagues to a state registry that labeled them extremists and terrorists.

Several criminal cases have been launched against Navalny individually, leading his associates to suggest the Kremlin intends to keep him behind bars indefinitely.

Navalny's closest ally and longtime strategist Leonid Volkov tweeted Tuesday from abroad that the plan will fail. “Putin plans and has been planning a lot of things: to make Russia one of the top-five world economies, to take over Kyiv in 96 hours, to kill Navalny with Novichok. His plans have always failed. So will these nine years,” Volkov said.