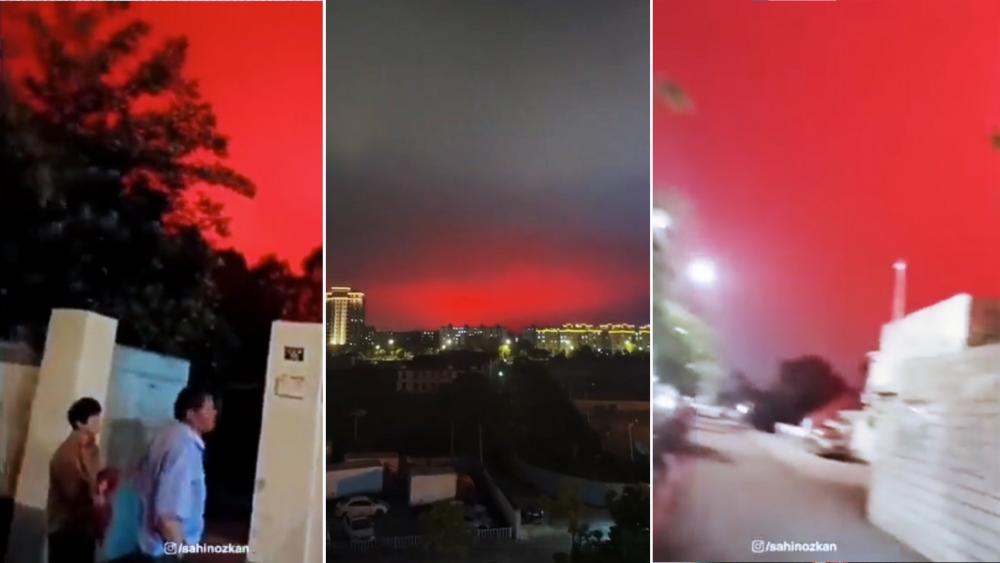 Unique weather conditions in China's port city of Zhoushan caused the sky to turn blood-red last week, and left many of the city's residents wondering if the end of the world had come.

A sense of panic could be heard in the voices of some of the residents as they recorded the eerie phenomenon which was seen under thick layers of fog, according to The Daily Mail. Some thought the red sky was an evil omen for China.

The crimson sky quickly became one of the trending topics on Chinese social media as videos of the event garnered tens of millions of views.

Footage from the port-city of Zhoushan near Shanghai shows the sky turned blood-red under thick layers of fog.

Local residents panicked that the end of days had arrived, and called the red sky a bad omen for China pic.twitter.com/N13B5Pm0Me

Some users on Douyin, China's version of TikTok, called the red sky a bad omen over China's handling of the COVID-19 pandemic, The Mail reported. COVID has recently resurged in the neighboring city of Shanghai where new extreme lockdowns were implemented.

One user said it means: "Accidents will happen." With another adding. "I started to stock up on supplies."

Chinese local media later claimed the blood-red sky was caused by the refraction of the lights from fishing boats. "When weather conditions are good, more water in the atmosphere forms aerosols which refract and scatter the light of fishing boats and create the red sky seen by the public," said the staff of the Zhoushan Meteorological Bureau, according to the Global Times.

Other users suggested the rare occurrence could have been caused by particulate matter still in the atmosphere from the Tonga Volcanic Eruption in January. NASA has found that the Tonga eruption effects even reached space.

Another video shared by a user who was farther away from the port shows the entire sky over the city was not red, but only the part that was beneath the fog layer.

The meteorological bureau of #Zhoushan said on Sunday that the red sky that appeared was caused by the refraction and scattering of light most likely from ship lights in the port#Flash #RedSky pic.twitter.com/8YOZvPcHla

Historians have found 300-year-old documents from China, Korea, and Japan that contain eyewitness accounts of a similar event. According to the accounts, in September of 1770, the skies over the region glowed red and the event continued for more than a week.

Researchers studying the event told Live Science in 2017 that they theorized the red skies were caused by a giant geomagnetic storm that rivaled the most powerful one on record, the so-called Carrington Event of 1859. The article explained such magnetic storms happen with solar eruptions hit the Earth's magnetosphere, the shell of electrically charged particles trapped by Earth's magnetic field.  The researchers speculated that if a Carrington-level solar storm would hit Earth today, the resulting hit to power grids around the world would be devastating, leaving most people without electricity.

In Israel, commentators who heard about the latest blood-red skies in China brought up a familiar biblical reference. During historic events like this, Bible scholars often point to the book of Joel in the Old Testament where a verse describes "blood and fire and pillars of smoke" in the skies.

Joel 2:30-31 reads, "And I will show wonders in the heavens and in the earth, blood, and fire, and pillars of smoke. The sun shall be turned into darkness, and the moon into blood, before the great and terrible day of the Lord come."

'Blood Moon' Seen This Past Weekend Across the US

Meanwhile, in the United States, amateur astronomers and other skywatchers witnessed the first lunar eclipse of 2022 early Monday morning or late Sunday evening depending on your time zone. 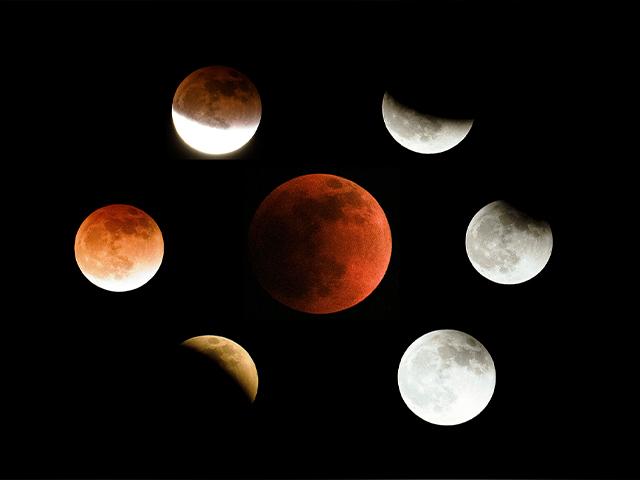 This combination of photos shows the moon in various stages of a total lunar eclipse during the first blood moon of the year in Temple City, Calif. May 15, 2022. (AP Photo/Ringo H.W. Chiu)

According to NASA, the full moon appeared red in both North and South America and Europe and Africa as part of a total lunar eclipse on May 15-16.  A lunar eclipse is caused by the moon going through Earth's shadow in space. It began at approximately 9:32 pm Eastern time on May 15. The greatest part of the eclipse was seen around 12:12 am Eastern. The totality of this unusually long eclipse lasted 1 hour and 24 minutes.

Some called this event a "super flower blood moon." NASA explained when the Moon moves completely into the umbra – the part of the eclipse known as totality, the Moon turns reddish-orange. This change in the Moon's color is due to Earth's atmosphere. The red color comes from some of the sunlight passing through Earth's atmosphere where it gets bent and colors like blue or green are filtered out, leaving behind longer wavelengths like the color red.

We see this same effect in sunrises and sunsets with the reddish-orange color.

Jeffrey Johnson, who lives in Pittsburg, Pennsylvania, took a series of photos of the progress of the eclipse that he posted to social media.

As CBN News has reported in recent years, even though there are scientific explanations for these types of Blood Moons, many Christians also see prophetic implications behind them. That's because they're directly mentioned in scripture.

A Blood Moon is foretold by the Bible in the book of Joel 2:31 which states: "The sun shall be turned into darkness, and the moon into blood, before the great and terrible day of the Lord come."

Also in Acts 2:20, "The sun shall be turned into darkness, and the moon into blood, before the great and notable day of the Lord come."

And, in the book of Revelations 6:12, a blood moon also is prophesied: "And I beheld when he had opened the sixth seal, and, lo, there was a great earthquake; and the sun became black as sackcloth of hair, and the moon became as blood."

All of the scriptures refer to the moon turning blood red as a heavenly sign the End Times is fast approaching.

Numerous "Blood Moon" events have occurred throughout history since those passages were written, but Jesus told his followers that we should observe the signs of the times, including signs in the heavens. And some preachers claim a large number of Blood Moon eclipses in recent years are just one of many signs that the end of the world is drawing closer and could happen in the near future.

Students of biblical prophecy point to other historic events like the restoration of the modern state of Israel in 1948, the return of millions of Jews to the Holy Land, and potential precursors to the biblical mark of the beast as further signs of the End Times. 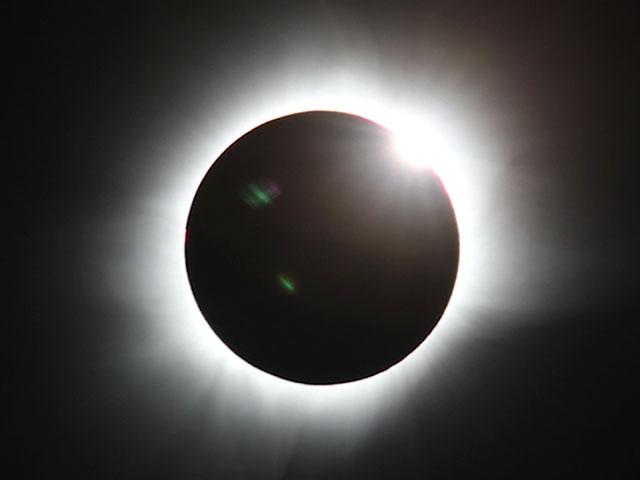 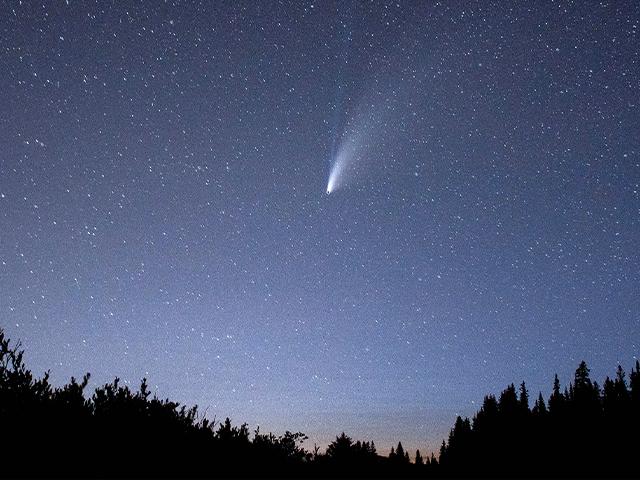