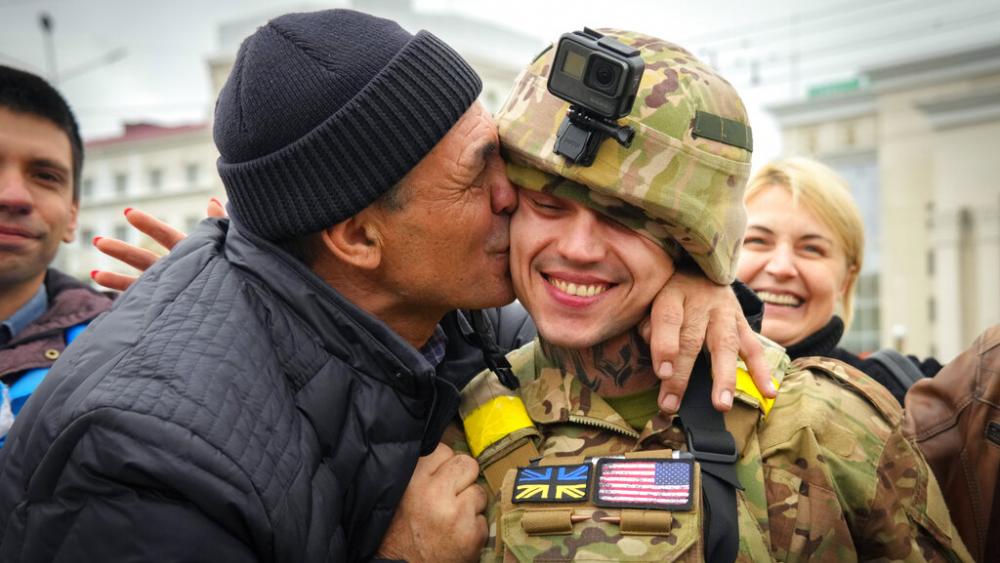 Ukrainian soldiers entering the city abandoned by the Russian army were immediately ambushed, though not by the enemy.  Beleaguered residents rushed them with tearful hugs and kisses.

Not long before, civilians shouted at the last Russian troops fleeing for the east bank of the Dniper River. As soon as they had gone, young people set about tearing down posters the Russians had put up nearly nine months earlier when they captured Kherson.

"You have to have something which you live for and this was the moment to live for, frankly," one Kherson resident said. "I knew liberation is not something happening every year, something in five generations and it's a moment to stay."

For residents who suffered under Russian occupation, the last nine months have been full of terror.

More atrocities come to light with each passing mile, and Ukrainian authorities plan to thoroughly investigate them all.

Kherson was spared destruction seen in other battles because the liberation came without the brutal, house-to-house fighting normally required to dislodge an entrenched enemy. They did it by the clever use of two particular weapons, and you might be surprised to find most of the fighting is being done from underground.

This CBN News reporter embedded with a Ukrainian unit right on the front lines, to see firsthand how they're winning the fight. While I was allowed to visit their headquarters, I have to be very careful not to give away their position because that would put them in grave danger.

We're miles away from Russian troops, deep in a hand-dug bunker. This is where commanders monitor troop movements via a fleet of off-the-shelf drones broadcasting over a Starlink internet connection. Once the pilot identifies an enemy tank, the location is relayed to an artillery unit, which loads a specialized, GPS-guided artillery shell provided by the United States.

The results speak for themselves.

This two-pronged strategy is so effective that thousands of Russian troops were abandoned on the wrong side of the river as they attempted to flee.

Orysia Lutsevych, manager of the Ukraine Forum in the Russia and Eurasia Programme at Chatham House, said, "Missile attacks are pretty much the only thing they have to make Ukraine suffer, to raise the costs for the alliance to support Ukraine. But that tactic is not working... Ukraine still maintains its functioning and western assistance is actually increasing."

But here in Kherson, it will be a long time before things get back to normal.

While residents are eager to rebuild, now is the time to celebrate. It might be almost winter, but for the people of Ukraine, today feels like springtime.