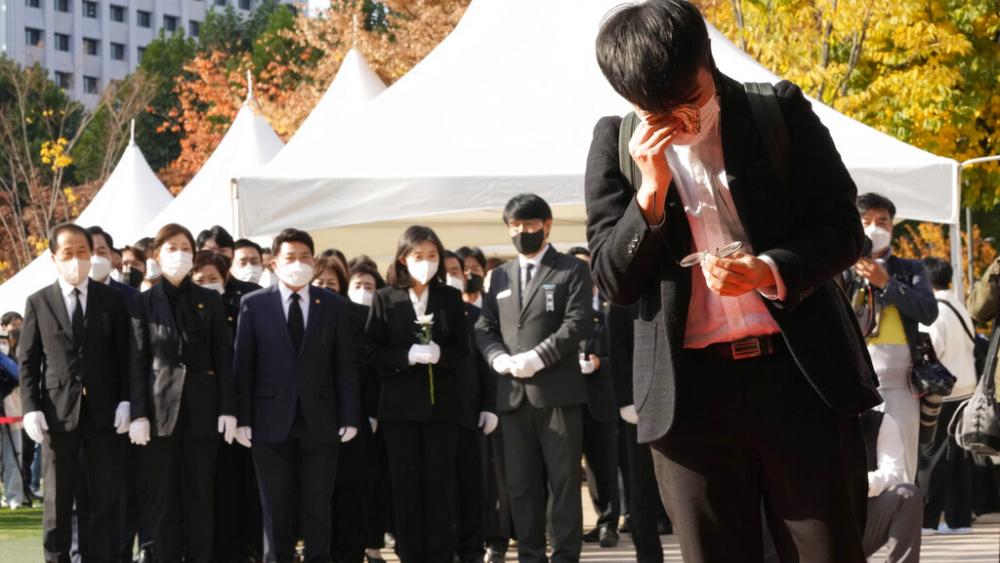 A mourner wipes his tear as he pays a silent tribute for victims of a deadly accident following Saturday night's Halloween festivities, at a joint memorial altar for victims at Seoul Square in Seoul, South Korea, Monday, Oct. 31, 2022. (AP Photo/Ahn Young

SEOUL, South Korea (AP) — South Korean police are investigating what caused a crowd surge that killed more than 150 people during Halloween festivities in Seoul last weekend in the country’s worst disasters in years, as President Yoon Suk Yeol and other residents paid respects to the dead at temporary mourning sites.

Saturday’s deadly crowd surge was concentrated in a sloped, narrow alley in Seoul’s Itaewon neighborhood, a popular nightlife district, with witnesses and survivors recalling a “hell-like” chaos of people falling on each other “like dominoes." They say the entire Itaewon area was extremely jammed with slow-moving vehicles and partygoers clad in Halloween costumes, making it impossible for rescuers and ambulances to reach the crammed alleys in time.

Police launched a 561-member task force to delve into details of the crush, the Interior and Safety Ministry said in a release.

Officers are analyzing footage taken by security cameras in the area at the time of the crush and related video clips posted on social media. They were also interviewing witnesses to find exactly when and where the crowd surge started and how it developed, according to the Seoul Metropolitan Police Agency.

A team of police officers and government forensic experts were to conduct a joint investigation on the Itaewon area, according to local media reports.

“The government will thoroughly investigate the cause of the incident and do its best to make necessary improvements of systems to prevent a similar accident from recurring,” Prime Minister Han Duck-soo said at the start of a government meeting on the disaster.

The Itaewon area, famous for its cosmopolitan atmosphere, is the country’s hottest spot for Halloween-themed events and parties, which had increasing popularity among young South Koreans in recent years. An estimated 100,000 people were gathered there in the country’s largest Halloween celebrations since the pandemic began.

But some business owners in Itaewon say an even larger number of people gathered there in pre-pandemic Halloween weekend festivities.

Police said in a statement they fielded 137 officers to maintain order during Halloween festivities last Saturday — much more than the 34-90 officers mobilized in 2017, 2018 and 2019.

Citing the figures, police dismissed as “different from the truth” speculations that a police station in the area suffered understaffing because it’s been providing extra security to Yoon, who relocated the country’s presidential office to a site near Itaewon. The police statement said police-provided security for a president has long been handled by two special police units and that the units have nothing to do with the Yongsan police station, whose jurisdiction includes Itaewon.

Some observers say the scope of the police investigation would include an apparent lack of safety steps, as well as looking into witness accounts of the crowd surge being caused by some people intentionally pushing others and making them fall. The Seoul Metropolitan Police Agency didn’t immediately publicize the details of its probe.

As of Monday morning, the government said it has identified 153 of the 154 dead people and informed bereaved relatives of their identifications. Nearly two-thirds of the dead — 98 — were women. It said 149 others remain injured. The death count could rise farther as officials said 33 of the injured were in serious conditions.

More than 80% of the dead were in their 20s or 30s and 11 were teenagers, the Interior Ministry release said.

The dead also included 26 foreigners. Five of them are from Iran; four from China; four from Russia; two from the United States; two from Japan; one each from Australia, Norway, France, Austria, Vietnam, Thailand, Kazakhstan, Uzbekistan and Sri Lanka, according to the Interior Ministry.

As the identifications of the dead neared completion, bereaved families were expected to begin funerals for their loved ones. Officials said the government will provide necessary support to bereaved relatives for funeral procedures.

One of the Americans killed was Anne Gieske, a University of Kentucky nursing student from northern Kentucky who was doing a study-abroad program in South Korea, the university said in a statement. The other was Steven Blesi, 20, his father Steve Blesi wrote on Twitter after earlier seeking information about his son.

Blesi appealed for information after not hearing from his son, asking: “If anyone has any news please share.” After a flood of responses offering help and support, he tweeted: “We just got confirmation our son died,” followed by “Thank you for the outpouring of love. We need time to grieve.”

One of the two Japanese dead is Mei Tomikawa, who was studying Korean language in Seoul, according to Japanese media. Her father Ayumu Tomikawa told Japan’s NHK television station that his daughter “really liked South Korea and was enjoying her life there." He and his wife reportedly left their home on Japan’s northernmost main island of Hokkaido to come to Seoul.

The government opened temporary memorials Monday in Seoul and other major cities in South Korea. People ranging from ordinary citizens to top officials including Yoon visited the sites, placed white flowers and deeply bowed to show respect. Many people also laid chrysanthemums, bottles of the Korean liquor soju, candles and snacks near an Itaewon subway station, with a host of condolence messages posted on the wall and elsewhere.

In the wake of the disaster, many hotels, department stores, amusement parks and other businesses in South Korea have canceled Halloween-themed events.

The crowd surge was South Korea’s deadliest disaster since 2014, when 304 people, mostly high school students, died in a ferry sinking.

The sinking exposed lax safety rules and regulatory failures. It was partially blamed on excessive and poorly fastened cargo and a crew ill-trained for emergency situations. Saturday’s deaths will likely draw public scrutiny of what government officials have done to improve public safety standards since the ferry disaster.