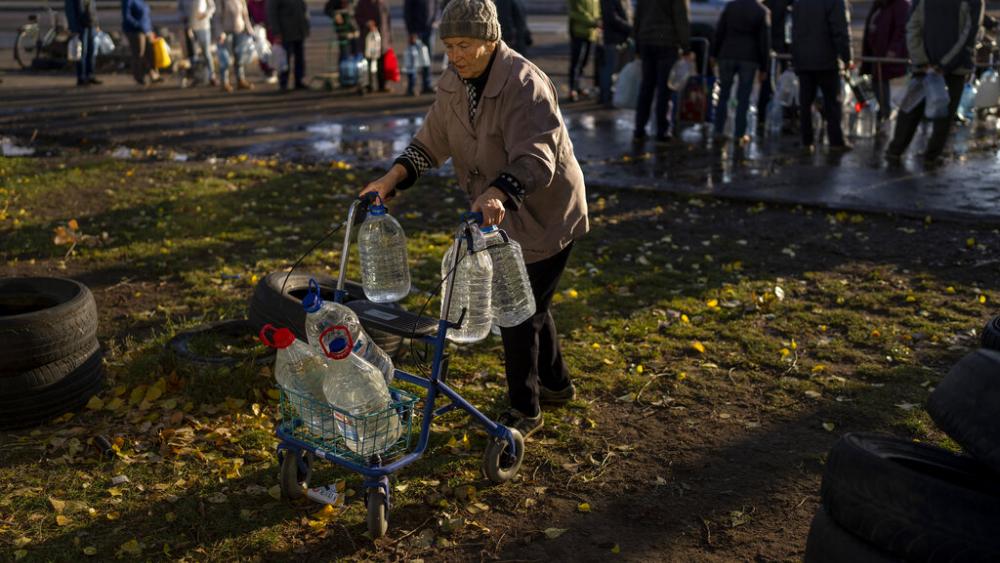 Catherine, 75, pushes her walker loaded with plastic bottles after refilling them in a tank, in the center of Mykolaiv, Monday, Oct. 24, 2022. (AP Photo/Emilio Morenatti)

KYIV, Ukraine (AP) — Ukrainian authorities tried to dampen public fears over Russia's use of Iranian drones by claiming increasing success Monday in shooting them down, while the Kremlin's talk of a possible “dirty bomb” attack added another worrying dimension as the war enters its ninth month.

Ukrainians are bracing for less electric power this winter following a sustained Russian barrage on their infrastructure in recent weeks. Citizens in the southern Ukrainian city of Mykolaiv lined up for water and essential supplies Monday as Ukrainian forces advanced on the nearby Russian-occupied city of Kherson.

Ukraine's forces have shot down more than two-thirds of the approximately 330 Shahed drones that Russia has fired through Saturday, the head of Ukraine’s intelligence service, Kyrylo Budanov, said Monday. Budanov said Russia's military had ordered about 1,700 drones of different types and is rolling out a second batch of about 300 Shaheds.

“Terror with the use of ‘Shaheds' can actually last for a long time,” he was quoted as saying in the Ukrainska Pravda newspaper, adding: “Air defense is basically coping, 70% are shot down."

Both Russia and Iran deny that Iranian-built drones have been used but the triangle-shaped Shahed-136s have rained down on civilians in Kyiv and elsewhere.

“First of all, we have to be able to counter the drones,” U.S. House of Representatives Speaker Nancy Pelosi said Monday at a press conference in Zagreb with Croatia's leader. “It is a dangerous technology and it must be stopped.”

Britain’s Ministry of Defense said Russia was likely to use a large number of drones to try to penetrate the “increasingly effective Ukrainian air defenses” — to substitute for Russian-made long-range precision weapons “which are becoming increasingly scarce.”

That assessment came on top of a stark warning by Russian Defense Minister Sergei Shoigu to his British, French, Turkish and U.S. counterparts over the weekend that Ukrainian forces were preparing a “provocation” involving a radioactive device — a so-called dirty bomb. Britain, France, and the United States rejected that claim as “transparently false.”

A dirty bomb uses explosives to scatter radioactive waste in an effort to sow terror. Such weapons don’t have the devastating destruction of a nuclear explosion, but could expose broad areas to radioactive contamination.

Russian authorities on Monday doubled down on Shoigu's warning.

Russian Foreign Minister Sergey Lavrov said Monday: “It’s not an unfounded suspicion, we have serious reasons to believe that such things could be planned.”

Ukraine has rejected Moscow’s claims as an attempt to distract attention from its own plans to detonate a dirty bomb. German Defense Minister Christine Lambrecht on Monday dismissed as “outrageous” the Russian claim that Ukraine could use a dirty bomb.

The White House on Monday again underscored that the Russian allegations were false.

"It’s just not true. We know it’s not true,” John Kirby, a spokesman for the National Security Council, said. “In the past, the Russians have, on occasion, blamed others for things that they were planning to do.”

Ukrainian President Volodymyr Zelenskyy suggested that Moscow itself was setting the stage for deploying a radioactive device on Ukrainian soil.

The country's foreign minister, Dmytro Kuleba, said Monday he has urged the United Nations’ nuclear watchdog to immediately send an inspection team to the country to dispel Moscow’s claims. The International Atomic Energy Agency said in response that it was preparing “safeguards visits” in the coming days.

The U.N. Security Council scheduled closed consultations Tuesday at Russia’s request on what it claimed was Ukraine’s plans for a “dirty bomb.”

On the battlefield Monday, his office said at least six civilians were killed and another five were wounded by Russian shelling of several Ukrainian regions over the past 24 hours, including Mykolaiv — where energy facilities were targeted — and the city of Bakhmut in the eastern Donetsk region.

Later in the day, the Ukrainian military reported they had “pushed the enemy out of” three villages in the eastern Luhansk region and one in Donetsk. Moscow has not immediately commented on the claim.

Russia and Ukraine have both accused each other of plotting to blow up the plant’s dam to flood the area as Ukrainian forces pressed an offensive on Kherson, which was captured by Russian troops early in the war.

Russian officials also accused Ukrainian forces of shelling a car with three civilians in the Kherson region, killing one.

Ukraine’s relentless artillery strikes on Kherson have cut the main crossings across the Dnieper River, which bisects southern Ukraine, and have left Russian troops on the west bank short of supplies and vulnerable to encirclement. The region is one of four that Russian President Vladimir Putin illegally annexed last month and put under Russian martial law last week.

Budanov, the Ukrainian intelligence chief, played down speculation that Russian forces were preparing an immediate exit from Kherson.

While Russian forces were helping tens of thousands of residents evacuate, “at the same time, they are bringing new military units in and preparing the streets of the city for defense,” he said.

Meanwhile, Russian authorities removed monuments of 18th-century Russian military chiefs Alexander Suvorov and Fyodor Ushakov from Kherson to save them from Ukrainian shelling.

On Saturday, Russian-installed authorities told all residents of Kherson to leave “immediately” ahead of an expected advance by Ukrainian troops seeking to recapture the city, which sits on a key route to the Russian-occupied Black Sea peninsula of Crimea.

A poll released Monday from the Kyiv International Institute of Sociology showed 86% of Ukrainian respondents agreed that Ukraine’s armed struggle with Russia should continue. Some 10% believed it was necessary to start negotiations with Russia even if Ukraine has to make concessions. The telephone poll of 1,000 adults from across Ukraine was conducted Friday through Sunday, it said.

Residents in Mykolaiv, northwest of Kherson, echoed the determination to fight on — even as their city endures shelling almost every night and residents must line up during the day for food and water.

“Ukraine is doing the right thing. Russians attacked us, and they must be beaten for that,” said Mykolaiv resident Mykola Kovalenko, 76.

With an eye on the coming winter, Kyiv and seven other Ukrainian regions on Monday planned rolling blackouts as authorities worked to fix the damage to energy facilities caused by targeted Russian shelling. Zelenskyy appealed to local authorities to make sure Ukrainians heed a call to conserve energy.

“Now is definitely not the time for bright storefronts and signs,” he said.