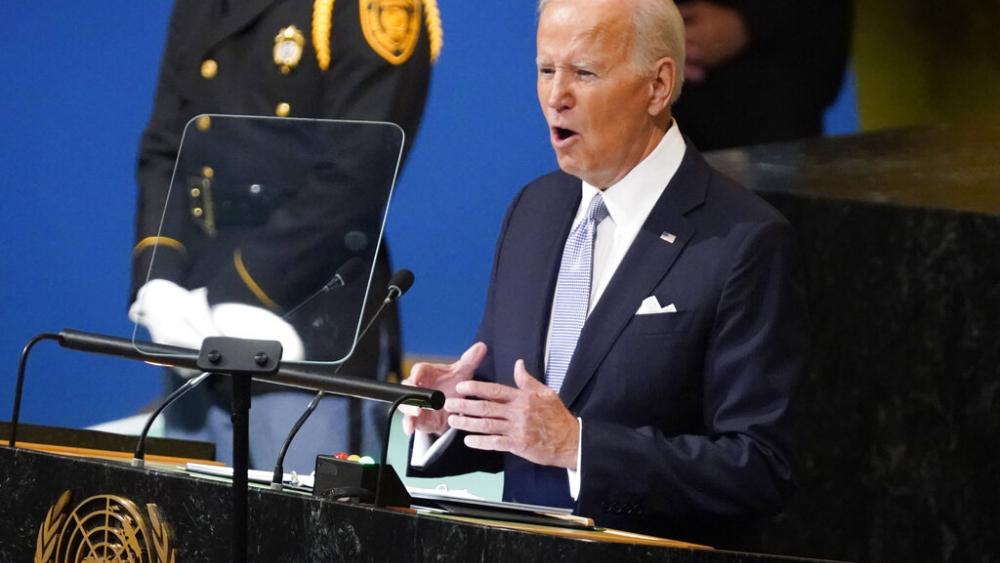 President Biden used his position on the world's stage at the U.N. General Assembly on Wednesday to emphasize America's commitment to democracy and support of Ukraine. His appearance also came just hours after Vladimir Putin appeared to raise the threat level of the war by bringing up the use of nuclear weapons.

Biden told the members of the U.N. that the organization's charter was under attack because of the ongoing war. The speech was delivered after remarks from Putin to his country calling for a partial mobilization effort, calling 300,000 reservists to battle against Ukraine and hinting that he wouldn't hesitate to use nuclear weapons.

"I want to remind you that our country also has various means of destruction," Putin said in his address to Russia. "To protect Russia and our people, we will certainly use all the means at our disposal. This is not a bluff."

A nuclear threat is something experts stress cannot be ignored.

"You don't want this war to go on indefinitely because there are risks. When Putin is doing the nuclear saber rattling, even if it is primarily bluster, it always carries some risk of getting out of control," said Michael O'Hanlon, a senior fellow with the Brookings Institution.

Meanwhile, British Defense Secretary Ben Wallace said Putin's mobilization of so many reserves is "an admission that his invasion is failing."

"He and his defense minister have sent tens of thousands of their own citizens to their deaths, ill-equipped and badly led," Wallace said in a statement. "No amount of threats and propaganda can hide the fact that Ukraine is winning this war, the international community are united and Russia is becoming a global pariah."

President Biden then shifted to another trouble spot, reiterating support for a "One China" policy when it comes to Taiwan and China. He then condemned the ongoing human rights violations in that region and around the world, including in Iran where protests raged after the death of a young woman for violating a strict Islamic dress code.

"Today, we stand with the brave citizens and brave women of Iran," President Biden said.

He reaffirmed the U.S. commitment to preventing Iran from obtaining a nuclear weapon as talks for a new agreement between the U.S. and Iran continue. He then ended with a plea for unity.

"My fellow leaders, the challenges we face today are great, indeed, but our capacity is greater. Our commitment must be greater still. So, let's stand together," he said at the end of his nearly 30-minute speech.

Biden also announced the U.S. would provide $2.9 billion in new assistance to fight the global food crisis. War in Ukraine has had a huge negative impact on the international food market.