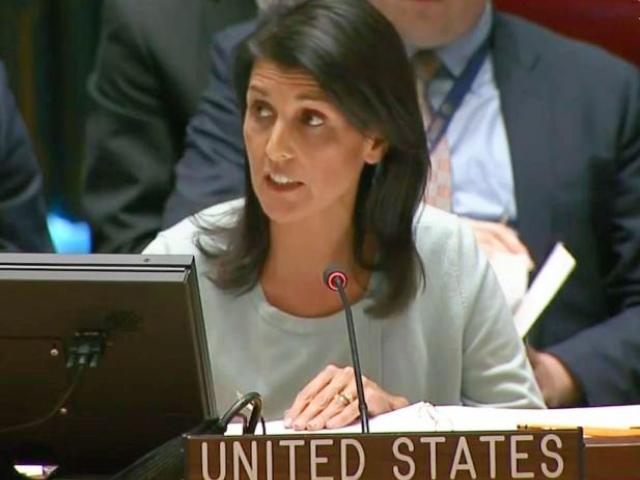 Emerging from her first monthly United Nations Security Council meeting, U.S. Ambassador to the U.N. Nikki Haley expressed astonishment at the tone and content of the council’s discussion.

Her response was like a shooting star—Haley’s Comet striking the east side of Manhattan, drawing attention to the anti-Israel propaganda that is ever so prevalent at the world body headquarters:

“The Security Council is supposed to discuss how to maintain international peace and security," she said. "But at our meeting on the Middle East, the discussion was not about Hezbollah’s build-up of illegal rockets in Lebanon; it was not about the money and weapons Iran provides to terrorists; it was not about how we defeat ISIS, it was not how we hold Bashar al-Assad accountable for the slaughter of hundreds of thousands of civilians…”

Haley said instead, the meeting focused on criticizing Israel, the one true democracy in the Middle East.

Watch her remarks at this link to the U.N. Watch Facebook page.

The United States pays $8 billion annually in mandatory payments and voluntary contributions to the United Nations. That’s one-fifth of the U.N.’s total budget.

The annual assessment paid by the U.S. ($622 million) amounts to 22 percent of the U.N. budget. The peacekeeping assessment is $2.4 billion, or 28 percent.

Twenty-eight anti-Israel U.N. Security Council resolutions have been proposed in the last 20 years—that’s more than one each year.

The anti-settlement building Resolution 2334 was the most recent which passed two days before Christmas 2016. The United States often vetoes such resolutions, but this time President Barack Obama directed U.N. Ambassador Samantha Power to abstain from the vote.

Many taxpayers are now joining Ambassador Haley and President Donald Trump in asking, “What are Americans getting for our investment?”

One answer: anti-Israel rhetoric, propaganda and U.N. votes against the Jewish state.