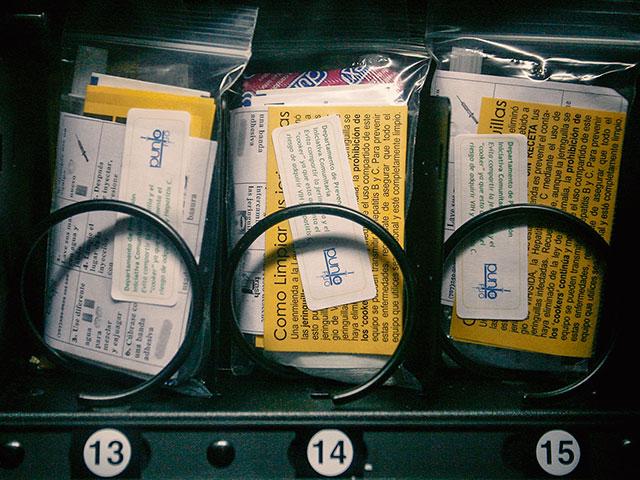 It's hard to believe it's gotten to this point.

Skyrocketing heroin use inspired the idea of offering syringes to heroin users in, of all places, vending machines.

Beginning next month, Las Vegas, Nevada will be the first city in the United States to offer the clean needles in the vending machines.  They will be dispensed in little packages that also contain along alcohol wipes, condoms and a container for used needles.

Heroin use has doubled in Vegas, and the number of people dying from heroin overdoses has quadrupled in recent years, according to the U.S. Centers for Disease Control and Prevention.

Heroin is usually injected intravenously.  Many heroin users share needles with other users.

The syringe vending machines will be placed in three locations throughout the city.  The clean needle packets will actually be free of charge.  In fact, there isn't even a place on the vending machine for money.

Although the clean needle packages are free, people who want them do have to first sign up.  Registration does not involve any notification of law enforcement or a requirement to enter treatment.  However, the vending machines will be located in buildings where treatment centers are located, so it will be easy for users to find the help they need to get off drugs if they want it.

The machines will be operated by Trac B Exhange.  Program manager Chelsi Cheatom told KSNV-TV "This is a harm reduction approach. So people are already engaging in these behaviors. So anytime someone is engaging in behavior that could cause them some potential health side effects, we want them to reduce the risk of harm," She continued, "By providing them with clean syringes as well as other clean instruments they can use, they are reducing the risk of sharing any items and they are also reducing the risk of reusing."

Syringe vending machines may start popping up in other cities.  Heroin use is not only a problem in Las Vegas.  According to the CDC, 91 people die every single day from opioid overdoses across America.  These deaths are largely from heroin, but opioids also include prescription pain killers.  Three-fourths of all heroin addicts first became addicted to pain pills, but then switched to heroin because it's cheaper and easier to get.