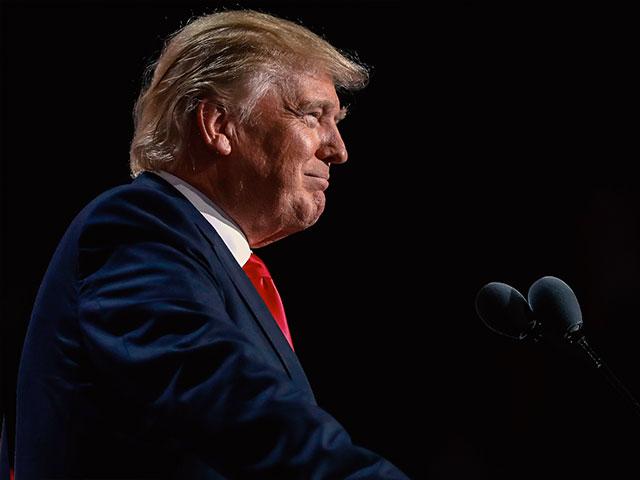 Donald Trump is about to take a double dip as he attempts to appeal to a predominately African-American audience on Christian television.

This coming Saturday he'll head to Detroit and will speak at The Impact Network, "the only African American owned and operated national Christian television network in the country."

Here's the statement from Pastor Mark Burns who has been one of Trump's most vocal African-American supporters:

"With much anticipation and excitement, I'm pleased to announce that Republican Presidential Candidate Donald J. Trump will be speaking at the only African American owned and operated national Christian television network, The Impact Network, Saturday, September 3rd, at 11am. Impact Network President and CEO, Bishop Wayne T. Jackson, will interview Mr. Trump at Great Faith Ministries in Detroit, Michigan."

"Mr. Trump will answer questions that are relevant to the African American community such as education (including HBCUs), unemployment, making our streets safe and creating better opportunities for all. He will then give an address to outline policies that will impact minorities and the disenfranchised in our country. Citizens around the country will see, as I've have seen, the heart and compassion Mr. Trump has for all Americans, which includes minority communities whose votes have been taken for granted for far too long."

If you haven't heard of The Impact Network, it is billed as, "one of the fastest growing faith-based television networks in existence…reaches over 50 Million homes and is currently being carried by DirectTV, Dish Network Channel and Roku."

Maybe it's appropriate that Trump will be interviewed by Bishop Wayne T. Jackson because he hosts the show, "Miracles Do Happen" and boy, oh boy, is it a miracle that Trump is the GOP presidential nominee.

The Impact Network website describes Bishop Jackson as a "tenacious and charismatic individual whose accomplishments have not only touched the spiritual sector, but has made significant impact in both the political and business arenas…Politically, Bishop Wayne T. Jackson has been a trusted spiritual advisor and a frequent guest to the White House for over the past two decades."

As for any hint of controversy, The Christian Post ran a story four years ago with the headline, "Bishop takes heat for unusual ceremony."

Read an excerpt of the article below.

A bishop in the US has is facing criticism after a video appeared of him laying on top of two men as part of an unusual consecration ceremony.

Bishop Wayne T Jackson, of Impact Ministries, says the ritual has been taken out of context and is nothing more than a covering of prayer.

The video appeared on YouTube and provoked accusations of sexual perversion, according to the Detroit News.

In it, Bishop Jackson appears dressed in red and white robes as lays face down on top of the two men, who are shrouded in robes on the floor.

The bishop says there was nothing sexual about the act and that people who think otherwise have "nasty minds."

The father of nine told The News: "I have done nothing wrong. This was done in front of a thousand people."

One last piece of info: according to their website, Great Faith Ministries International believes in the following:

There is only one living and true God who exists in three distinct persons: Father, Son and Holy Spirit. We believe Jesus Christ is the Son of God who came to this earth as the Savior of the world.

Jesus died on the cross and shed His blood for our sins. We believe that salvation is found by placing our faith in what Jesus did for us on the cross. We believe Jesus rose from the dead and is coming back soon.

The Bible is inspired by God and the authority on which we base our faith, conduct and doctrine.

We believe in taking Communion as an act of remembering what the Lord Jesus did for us on the cross.

That we are children of God, joint heirs in the kingdom through Christ Jesus.

We believe in miracles, signs and wonders.

We believe in the Word of God: "If thou canst believe, all things are possible to him/her that believes." -Mark 9:23 We more than conquerors and God intends for each of us to experience the abundant life He has in store for us.