Why More and More Millennials Favor Socialism and Communism over Capitalism 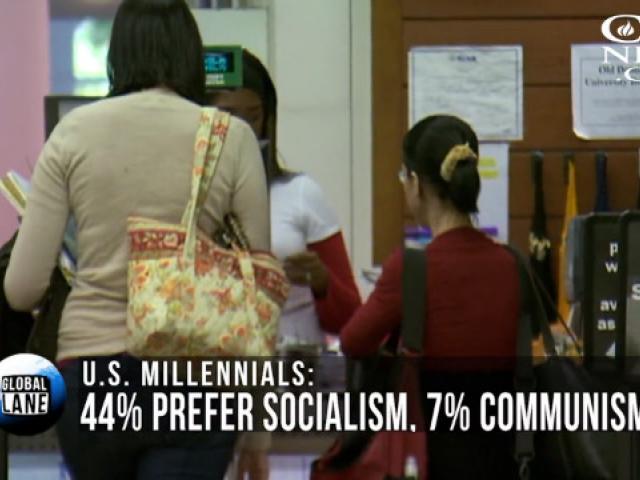 Watch The Global Lane's Set It Straight segment to find out about their view and what may possibly be done to turn around the thinking of U.S. millennials.

A recent poll shows a majority of U.S. millennials would prefer to live under a socialist or communist government system than under capitalism.

The survey, taken by the Victims of Communism Memorial Foundation found that 44 percent of millennials questioned said they preferred socialism over capitalism. Seven percent preferred communism.

Why do a majority of millennials think this way?

The results come as no surprise to Nikita Vladimirov of Campus Reform's Leadership Institute. He says much of American academia is "very Marxist in many ways," and teach a positive view of "democratic socialism" to students.

Campus Reform reported this past summer about a 2017 socialism conference held in Chicago which was attended by 1,500 people. Many of the attendees were college professors.

"This just shows you the scope and the problem of the movement," said Vladimirov.

Originally from Russia, he and his family have experienced socialism firsthand.

"For them it was a very uncomfortable experience and unfortunately you'd think that after the collapse of the Soviet Union many of the Soviet and socialist policies that were in place would go away. Well, that is partially not true," he said.

Also, Vladimirov claims the presidential candidacy of Bernie Sanders, in addition to eight years of liberal president Barack Obama, have influenced the views of younger Americans.

President Obama "continuously stoked class warfare and told business owners, by the way you didn't build that business, somebody else built that business for you. So, all of those things worked together in my view to make socialism much more popular and attractive to millennials."

And millennials were not alive or were very young during the economically prosperous years of Ronald Reagan and Bill Clinton. They have yet to experience the benefits of a robust capitalist economy.