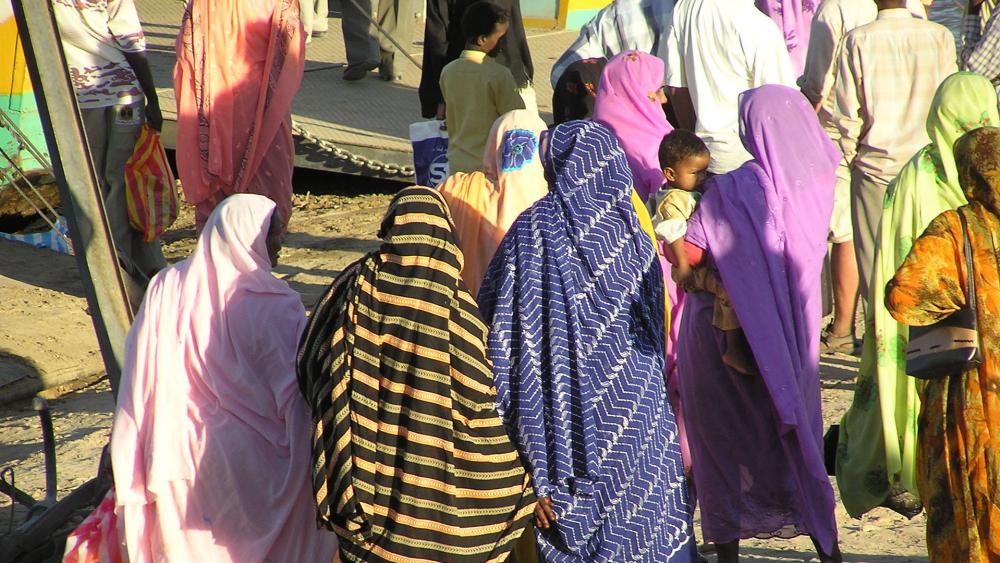 Women Of Sudan AS

“Christian women are the most persecuted group in the world.”

The first time I heard that statistic, I was sitting safely at church in Washington, D.C. David Curry, the president of Open Doors USA, came to speak about the plight of persecuted believers around the world. As he shared their stories, my heart was deeply grieved as I learned about how women and girls are doubly persecuted for their faith and their gender.

The founder of Open Doors USA, “Brother Andrew” earned the nickname “God’s Smuggler,” for his work smuggling Bibles into countries where it was illegal to own a Bible. One of the most notable stories was early in his ministry, where he successfully smuggled Bibles across the border into communist Romania. This small Eastern European country was my birthplace. I was born a little over a year after communism fell, but my time in Romania was brief, as I was adopted into an American family. I didn’t grow up under religious persecution, but I have friends in Romania who have shared vivid stories of their time under communism and the persecution the country faced for decades.

Religious persecution isn’t a thing of the past, ceasing when communism ended. Christians are heavily persecuted in many areas of the world. One in nine Christians will experience high levels of persecution, and gender-specific discrimination and persecution is rampant throughout the world.

The United Nations estimates that approximately 200 million girls are missing from the world due to sex-selective abortions, abandonment, or intentional murder. In addition to the millions of females that are missing, women and girls are routinely abused and mistreated, physically and sexually.

The definition of “gender discrimination” is simple, but the issue is complex.

An area of the world that’s of particular concern is the country of India. Approximately 239,000 girls under the age of five die in India each year due to neglect, simply because they are girls. Over the past decade, 2.4 million girls have lost their chance at life, either being abandoned, or murdered, because their families didn’t want another female. If a girl does manage to survive, Indian girls routinely receive less education, have poorer nutrition, and receive less medical attention than boys. The plight of Indian women is heartbreaking; one-third of women are illiterate, there are no laws preventing spousal rape, young women become child brides, and sex-selective abortion and female infanticide are common practices.

An Indian woman, interviewed for a documentary titled “It’s a Girl,” tells how she murdered eight of her children, because they were born female. After she gave birth, she tells about how she’d strangle her daughters after they were born.

Many families feel like they have no choice but to kill their daughters. In their minds, they justify quickly killing the child, instead of allowing her to grow up in extreme poverty, or having to come up with the money for a dowry.

Another horrible practice in India is dowry deaths. A “dowry death” is the murder or suicide of a married woman becaue of a dispute over her. Last year, an estimated 87,000 women were killed in dowry deaths around the world, and 50,000 of those women were killed by their spouse or family members. Women commit suicide, or are murdered by their husbands or in-laws for not meeting dowry demands. In India, it’s also more difficult for “ugly and handicapped girls” to get married, because the groom’s family would demand larger dowries. This practice is technically illegal in India, but is rarely prosecuted. Dowry deaths make the home one of the most dangerous places for women to be in the world.

The country with the most notable population of girls missing is China. The two most populous nations on earth, India and China, eliminate more girls each year than the number of girls that are born in the United States. Prospective parents prefer sons above daughters, and Chinese girls are routinely aborted, abandoned, or end up in orphanages. In 1979, the Chinese government instituted the “One Child Policy.” Under that restrictive policy, families that had more than one child were at risk of having their wages reduced, or losing social services.

In parts of the world, particularly in China and India, some of the deadliest words are “It’s a girl.” Sex-selective abortion affects girls disproportionately, and in many places, it’s legal to abort a child if they happen to be the unfavorable gender: female. The term “gendercide” describes this practice. In China, the men outnumber the women by 33 million, and in India, a girl is aborted every minute.

Other Forms of Gender Persecution

Another form of gender persecution is female genital mutilation, which is a removal of some or all of the female genitalia for nonmedical reasons. The humiliating procedure is most often performed on girls between birth and 15 years old. It’s estimated that more than 200 million girls and women have been subject to this cruel process. The traumatic event, often including being physically restrained while the procedure takes place, will emotionally affect women for the rest of their lives.

An issue that’s received attention over the past few years is the issue of human trafficking. According to the International Labour Organization, there are an estimated 40.3 million victims of human trafficking globally, and 75 percent are women and girls.

The issues highlighted so far are just a few of dozens of examples where women and girls are discriminated against, and persecuted because of their gender.

Let’s zoom in a little further, and talk about the plight that Christian women face around the world. Women are already discriminated against because they are women, but when they are found to be Christians, the suffering and persecution against them increases. Christian women are doubly persecuted.

Christian persecution is growing globally. In 2019, an estimated 245 million Christians will experience high levels of persecution because of their faith. This is a 14 percent increase from last year. One of the trends from the Open Doors USA annual “World Watch List” report is that women are an increasing target. It’s important that we recognize how vulnerable our sisters are around the world, especially in the parts of the world where women already face such strong gender discrimination. In Nigeria, the terrorist group Boko Haram captured a 15-year-old woman, killed her father, and then repeatedly raped her because she refused to renounce her faith. Sadly, her story is common in countries with high levels of persecution.

The Bible on Gender Discrimination

As Christians, we uphold the truth that all people are created in the image of God—both male and female. Scripture is clear that men and women should be treated with the same levels of dignity and respect. Nowhere in the Bible do we see that one sex is superior to the other. Instead, we see our Savior upholding the dignity of women during his ministry on earth.

Women in ancient culture were vulnerable and mistreated. In a patriarchal society, the prayers of Jewish men included a prayer of thanksgiving, “Praised be God that he has not created me a woman.” Some Jewish writers taught that women should never leave the home, except to go to the synagogue.

Jesus’ treatment of women was countercultural. In one of the most remarkable stories in the Gospels, we see Jesus tenderly interact with the woman at the well. Not only was he speaking with a woman in public, she was also a Samaritan. Cultural protocol dictated that Samaritans and Jews didn’t interact, much less a Jewish man interacting with a Samaritan woman. Scripture doesn’t name the woman, but it doesn’t have to, because Jesus did something more important. The Samaritan woman came to the well in the middle of the day, when she thought no one would notice her drawing water. She was an outcast of society, shamed for her promiscuous behavior, yet in her conversation with Jesus, he treats her with kindness and interacts with her honestly. He doesn’t shy away from addressing her sin, but offers her living water.

What Can We Do?

Pray. Our first and most important action should be to pray for our persecuted sisters across the world. Our prayers deeply matter, and we can be a part of actively advocating for our sisters around the world through our prayers.

Christians should help reimagine a world where it would be unthinkable that any woman is persecuted because of her sex. We should help raise awareness on this issue and speak on behalf of our sisters around the world.

A practical step is to prayerfully consider whether the Lord is leading your family to adopt. There are thousands of girls that are eligible for adoption in countries such as India and China. If your family isn’t called to adopt, perhaps you can help financially support another family who is called to adopt.

The statistics in this article are hard to comprehend, and heartbreaking. But may they propel us to our knees and into action for our vulnerable sisters around the world.

Chelsea Patterson Sobolik serves as a Policy Director in the Washington, D.C. office of the Ethics & Religious Liberty Commission of the Southern Baptist Convention. Previously, she worked in the U.S. House of Representatives on pro-life policies, domestic and international religious freedom, adoption, and foster care issues. Chelsea is the author of Longing for Motherhood - Holding onto Hope in the Midst of Childlessness. She has a B.A. in International Relations from Liberty University and lives in Washington, D.C. with her husband Michael.  This article originally appeared on ERLC.com. Used with permission.