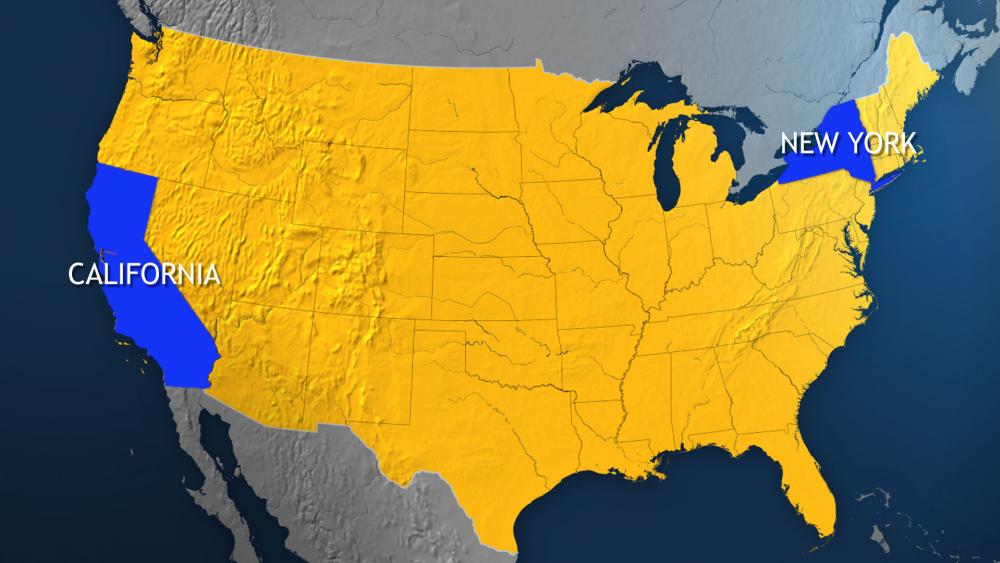 Even though the national economy is humming along nicely, the liberal states of New York and California are poised to lose congressional seats due to an ongoing exodus according to US Census Bureau population estimates released this week.

The Empire State and the Golden State are among 27 states and the District of Columbia which have lost residents due to domestic migration over the last two years.

New York was one of only 10 states to suffer a total population decline in 2018-19 — its fourth consecutive annual decrease after five years of growth, and the largest population drop of any state, the census data determined.

New York's population has been stagnant over the past decade, with a modest 75,459 increase in residents since 2010, a growth rate of just 0.4 percent, ranking 46th-lowest out of 50 states, according to the newspaper.

This stagnation will likely result in the loss of one or two congressional seats in the coming years.

"The cost of living in New York — the high taxes, regulations, and housing costs — are making it untenable to live the American dream here," Borelli told the newspaper, noting how many high school friends have moved out of New York.

All That Glitters Isn't Gold

Likewise, California's population growth has also continued to slow. So much in fact that for the first time in the state's history it may also lose a congressional seat.

The Los Angeles Times reported the state's economic woes are making it harder for people to make a living, so they're leaving.

William Frey, a senior fellow at the Brookings Institution, told the newspaper the Golden State's population migration could result in the loss of a seat in the US House of Representatives.  California currently has 53 seats in the House.

"It's got a lot to do with dispersion from California to the rest of the west," Frey said. "Arizona, Texas, and Colorado are all big destinations for California migrants, and they all are gaining seats."

Texas may gain three seats after the 2020 decennial count, according to Frey's analysis of census data, while states such as Arizona, Colorado, and Oregon may gain one seat apiece.

The apportionment population count for each of the 50 states includes the state's total resident population — citizens and non-citizens — as well as a count of the overseas federal employees and their dependents who have that state listed as their home state in their employers' administrative records, according to the US Census Bureau.