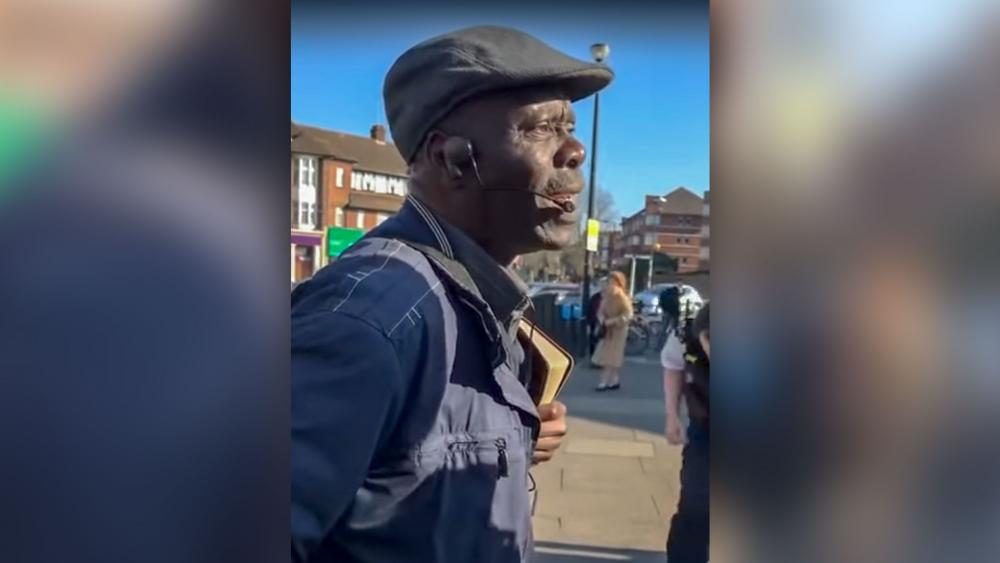 A street preacher has been arrested in London, sparking outrage online. In a video of the incident posted to Twitter, officers can be seen forcefully asking the African man to stop, before arresting him on a rather baffling charge of “breaching the peace.”

Report: Asia Bibi Is Just One of ‘Many Other’ Christians Suffering in Pakistan

“What are you doing here?” the officer asked the preacher, who was heralding the Gospel near Southgate Underground station in London.

“I am preaching,” he simply replied.

“I am going to require you to go away,” the police officer stated.

“Well then, then I will arrest you for a breach of peace,” the police said.

“What breach of peace?” asked the Christian man.

“It’s what you’re doing at the moment,” the policeman explained. “You’re causing problems — you’re disturbing people’s days and you’re breaching their peace. If you won’t go away voluntarily, we will have to arrest you.”

“I will not go away because I need to tell them the truth — because Jesus is the only way, the truth and the life,” the preacher responded.

“But nobody wants to listen to that,” the officer snapped back. “They want you to go away.”

At this point, the officer handcuffs the man, before an additional officer snatches his Bible out of his hands.

“Don’t take my Bible away,” the man cried.

“You should have thought about that before being racist!” the officer replied.

Faithwire reached out to the Metropolitan Police for more information surrounding the incident. The police admitted that, despite the officer’s comments accusing the preacher of being “racist,” nothing of this nature had been said by the Christian man. They also noted that “no language of this nature was used in the presence of officers.”

“The initial report suggested some Islamophobic language had been used,” the police force told Faithwire. “However nobody has made a formal allegation to this effect and no language of this nature was used in the presence of officers.”

This afternoon an African Christian preacher was arrested in London for preaching about Jesus Christ. This is very sad to see. What happened to freedom of speech? pic.twitter.com/BId74SOgun

As for the arrest itself, the police confirmed that this was made on account of the man “breaching the peace.”

“An arrest was made to prevent a breach of the peace,” the police noted, adding, “The man was then de-arrested and no further action was necessary.”

Many have called on the police to apologize for the incident. Christians and atheists alike have expressed their outrage at the incident. Anglican clergyman and former chaplain to the Queen, Rev. Dr. Gavin Ashenden, was one of those to speak out.

“The police have closed down freedom of speech and become Christianophobic,” he wrote on Twitter. “If we fail to protest we will lose our freedom under the law.”

Ashenden, who is not afraid to speak his mind, then called on the Archbishop of Canterbury to pledge his support to the preacher.

“Perhaps the Archbishop of Canterbury and the House of Church of England bishops might like to protest in favour of the poor and marginalised Street preacher at the hands of policeman who neither know nor apply the law?” he questioned. “Or do they just do socialist economics?”

This is deeply deeply concerning. The way his bible was removed is horrendous. These officers should be ashamed of themselves for the way they dealt with this. https://t.co/apzj9HXKOf