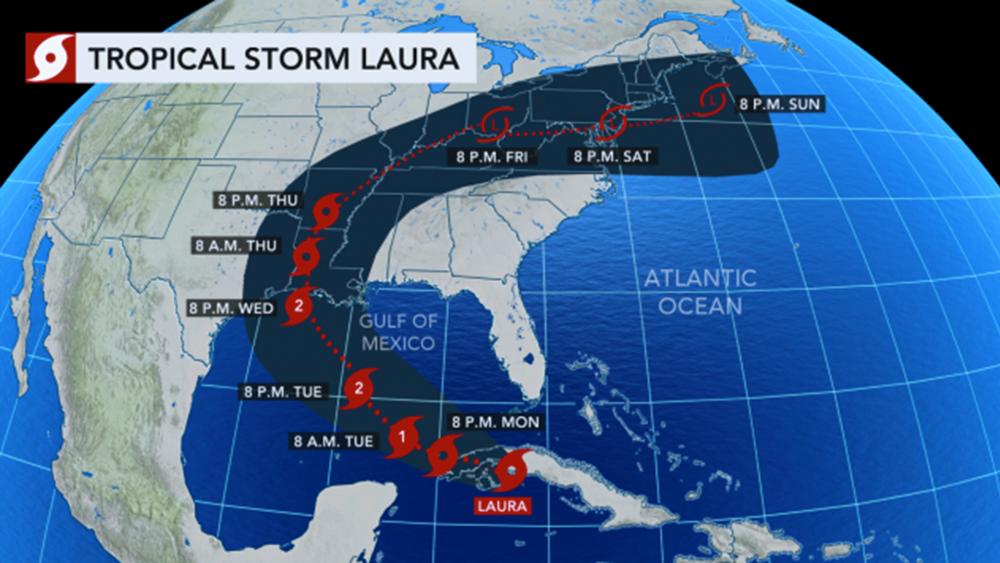 After lashing parts of the Caribbean with deadly force over the weekend, Laura is expected to continue to strengthen as it tracks over the warm waters of the Gulf of Mexico and to unleash a blow of hurricane-force winds and flooding rainfall on the U.S. Gulf Coast at midweek--just over 48 hours after Marco's anticipated landfall.

Tropical Storm Laura left behind damage and flooding as it pushed across the northern Caribbean. At least 13 deaths have been attributed to Laura, four of which occurred in the Dominican Republic and nine in Haiti. Several more remain missing.

As of early Monday morning, the storm had strengthened slightly near eastern Cuba, with wind speeds of 60 mph, and was racing west-northwest at 20 mph, according to the National Hurricane Center (NHC).

Tropical storm warnings were issued early Monday morning for the middle and the lower Florida Keys from Craig Key westward to Key West in Florida.

Although some gusty showers and thunderstorms on the outer periphery of the storm are forecast to reach the Florida Keys into Monday night, with wind gusts of 40-50 mph possible, the brunt of Laura's wrath is set to charge toward parts of the central and western U.S. Gulf Coast.

Laura will take a curved path into the central Gulf of Mexico around a strengthening and westward-extending high-pressure system, known as the Bermuda-Azores high-pressure area.

"Laura will briefly track over the shallow wake of cooler water left in the Gulf from Marco; this might slow Laura's intensification process but only briefly," AccuWeather's Lead Hurricane Expert Dan Kottlowski said. "Then, Laura will be over very warm water and in a low wind shear environment, which will favor strengthening."

Kottlowski also mentioned that this favorable region may allow Laura to "rapidly strengthen," opening up the possibility for Laura to briefly become a major hurricane at Category 3 strength, with maximum sustained winds of 111 mph or greater.

AccuWeather meteorologists are predicting that Laura will make landfall as a Category 2 hurricane since Laura will interact with the land upon its approach to the U.S. Gulf Coast. The storm is expected to strike near the Texas/Louisiana border late Wednesday or Wednesday night.

In the United States, Laura is forecast to be a two on the AccuWeather RealImpact™ Scale for Hurricanes, a scale that rates tropical systems from less than one to five based on expected impacts.

Impacts are forecast to reach the southern coasts of Louisiana first early on Wednesday morning in the form of torrential, tropical rainfall and gusty winds.

The strongest winds will likely be near the center and just to the east of the eye of the storm. Hurricane-force winds are expected to begin as Laura strengthens over the Gulf of Mexico on Monday night.

Damaging winds will reach the central Gulf Coast at midweek, with wind gusts of 100-120 mph near where Laura makes landfall with an AccuWeather Local StormMax™ wind gust of 130 mph.

"These winds can cause power outages and damage to structures and trees," AccuWeather Meteorologist Brett Rossio said.

Trees that are sitting in soil that has already been saturated by Marco will be more susceptible to being toppled in Laura's fierce winds.

In addition to wind, Laura will also bring life-threatening flooding.

"Rainfall from Laura may fall across the same places that received tremendous rainfall from Marco, further exacerbating the flooding situation along the Gulf coast," Rossio said.

The combination of Marco's heavy rain from the western Florida Panhandle to central Louisiana and another round of tropical downpours from Laura will make areas more susceptible than usual to flooding.

From Laura alone, the highest rainfall totals of 4-8 inches with an AccuWeather Local StormMax™ of 12 inches will be most likely in southern Louisiana.

As is typically the case with a land-falling tropical system, isolated tornadoes will be possible north and east of the center of the storm. In addition, the Louisiana coastline is likely to take another battering with rough surf, beach erosion and significant coastal flooding from storm surge.

All residents are urged to pay attention to evacuation orders from local officials. 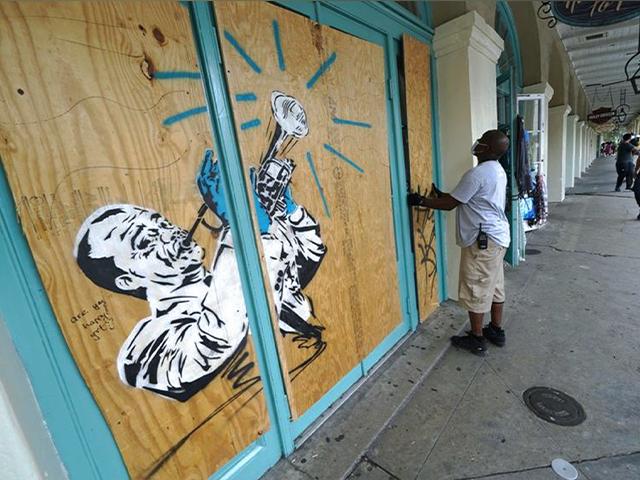