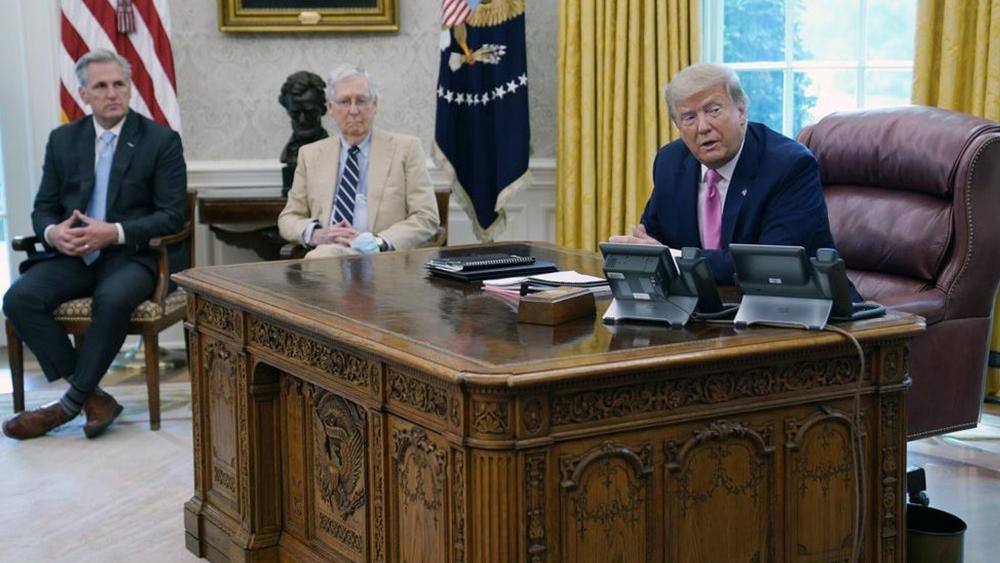 President Donald Trump insisted “good things” were underway on the next COVID-19 aid package Monday as he met with Republican congressional leaders. But the Senate GOP and the White House are still negotiating about key points like more virus testing money.

“We’ve made a lot of progress,” Trump said as the meeting got underway.

But the president acknowledged the “big flare-up” of rising caseloads and deaths in the states. “Unfortunately, this is something that’s very tough,” he said.

The GOP is expected to release a $1 trillion spending bill this week. One big issue: the $600 boost to weekly unemployment checks is set to expire this week. Democrats want to extend it, but Republicans will likely propose a cut.

The package from Senate Majority Leader Mitch McConnell had been quietly crafted behind closed doors for weeks and was expected to include $75 billion to help schools reopen reduced unemployment benefits alongside a fresh round of direct $1,200 cash payments to Americans, and a sweeping five-year liability shield against coronavirus lawsuits.

Mnuchin vowed passage by month’s end, as earlier benefits expire, and said he expected the fresh $1 trillion jolt of business tax breaks and other aid would have a “big impact” on the struggling economy.

Mnuchin said he’s preparing to start talks with Democrats. He and Meadows were headed to the Hill later to brief lawmakers.

“We can’t pass the bill in the Senate without the Democrats and we’re going to talk to them as well,” McConnell agreed.

There remains a wide gulf between the GOP and Democratic packages, with Democrats passing in the House a $3 trillion package, while the Republican package came in at about $1 trillion.

“We have to end this virus,” House Speaker Nancy Pelosi, D-Calif., said Monday on MSNBC.

Pelosi’s bill, approved in May, includes $75 billion for testing and tracing to try to get a handle on the virus spread, funnels $100 billion to schools to safely reopen and calls for $1 trillion for cash-strapped states to pay essential workers and prevent layoffs. The measure would give cash stipends to Americans, and bolster rental and mortgage and other safety net protections.

The political stakes are high for both parties before the November election, and even more so for the nation, which now has registered more coronavirus infections and a higher death count of 140,500 than any other country.

President Trump wants a liability shield so businesses can't be sued if people contract the virus, and he's determined to get a payroll tax cut.

One point of contention, congressional Republicans have already proposed billions more in spending for testing and for the CDC and National Institutes of Health. The president, reportedly, is against it.

This would be the fifth virus aid package, after the $2.2 trillion bill passed in March, the largest US intervention of its kind.