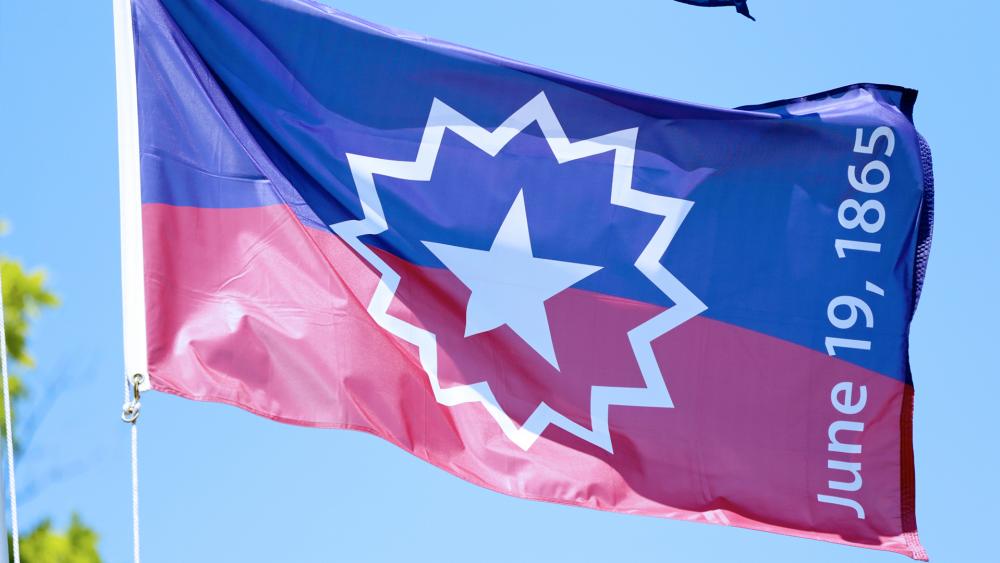 The Juneteenth flag, commemorating the day that slavery ended in the U.S., flies in Omaha, Neb., June 17, 2020. (AP Photo/Nati Harnik)

Two Republican senators have proposed replacing Columbus Day as a federal holiday with Juneteenth to mark the day that black Americans celebrate freedom. But why do they want to drop Columbus Day at the same time?

At issue, every federal holiday costs the government $600 million in paid leave for government workers, according to the two senators.

"In response to a bipartisan effort to give federal workers another day of paid leave by designating Juneteenth a federal holiday, we have offered a counterproposal that does not put us further in debt," Johnson, a budget hawk, said in a statement. "We support celebrating emancipation with a federal holiday, but believe we should eliminate a current holiday in exchange. We chose Columbus Day as a holiday that is lightly celebrated, and least disruptive to Americans' schedules."

Johnson said he's "happy to celebrate the emancipation with a national holiday, but I just don't think we should be, when we're already blowing a hole in the budget right now, offering another paid day off for federal employees."

Lankford agrees that Juneteenth needs to be remembered. He also believes Congress needs to subtract a holiday due to the financial cost of adding to the total number of federal holidays.

"Juneteenth is a day in our history that redefined the meaning of freedom and equality in America," Lankford said. "Throughout our history, we have strived to become a more perfect union and Juneteenth was a huge step in attaining that goal."

"We should celebrate these strides on the federal level while remaining cognizant of the impact the existing 10 federal holidays have on federal services and local businesses. We can reduce these impacts by replacing Columbus Day as a federal holiday with Juneteenth, America's second independence day. I'm hopeful the Senate will support this amendment to celebrate this significant day in our nation's history," Lankford continued.

Cornyn, however, sees swapping Columbus Day for Juneteenth as "problematic."  He contends that cutting Columbus Day would alienate Italian Americans who have long celebrated the day for the Italian explorer who has long been credited as the discoverer of New World.

"I think that's problematic," he told The Hill of the Johnson counteroffer. "We're working through all those things right now, we just don't have an answer right this second."

Meanwhile, protestors across the nation have set their sights on toppling and vandalizing statues of Christopher Columbus, who some say "represents genocide" as Spanish soldiers or conquistadors and others followed, conquering and enslaving all of the indigenous people inhabiting both North and South America. Some have moved for an "Indigenous Peoples' Day," to replace Columbus Day.

The city of Columbus, Ohio, took down its statue of the explorer on Wednesday.

Juneteenth is commemorated on June 19 - the day in 1865 when Union soldiers arrived in Galveston, Texas with the news that President Lincoln had issued the Emancipation Proclamation freeing all slaves in the Confederate states in 1863.

The holiday is currently recognized in 47 states.