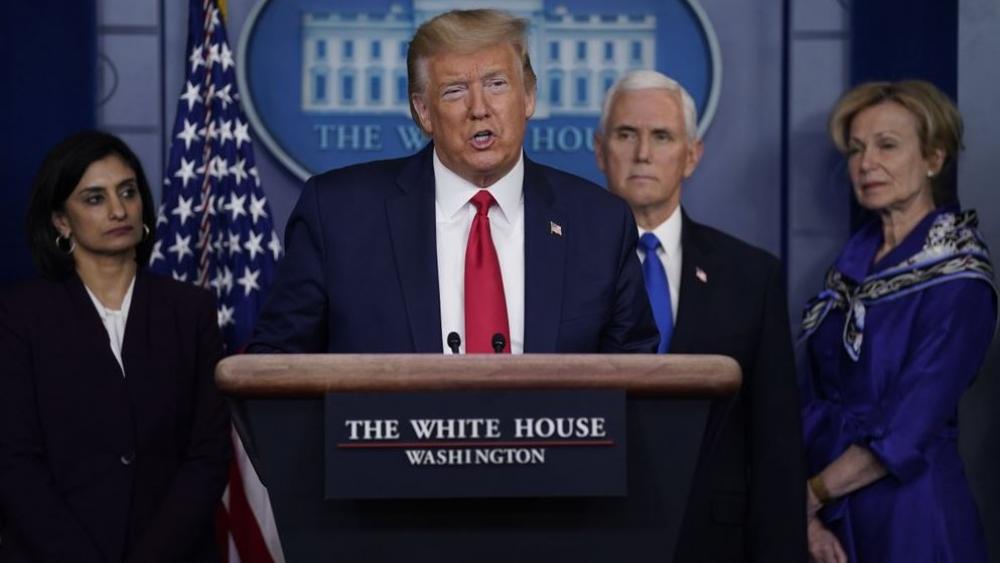 America is at war with an "invisible enemy." President Trump said Wednesday that the US is on a war-time footing in the fight against COVID-19.

The Dow, S&P 500 and Nasdaq closed down by 5 percent or more on Wednesday, erasing Tuesday's 5 percent comeback.

The US Congress is striking back against recession fears with a new economic aid package.

Wednesday afternoon, the US Senate passed a multi-billion dollar emergency package to help Americans suffering from the economic effects of the COVID-19 pandemic. The House already approved the measure. President Trump signed the bill into law Wednesday evening.

The Senate will now begin work on the third and largest stimulus package that lawmakers hope to pass next week. The bill would infuse almost $1 trillion into the US economy.

At the Capitol on Wednesday, Senate Majority Leader Mitch McConnell prepared his colleagues for unprecedented steps to deal with the epidemic's assault on the economy. "I will not adjourn the Senate until we pass a far bolder package," McConnell said. "We aren't leaving until we deliver."

On another financial note, the Department of Housing and Urban Development is responding to the pandemic by suspending all foreclosures and evictions until the end of April.

US War Footing Against Coronavirus

As part of his war-footing, President Trump announced he's invoking the Defense Production Act to allow the production of essential equipment to ramp up.

The US-Canadian border is also being closed to all non-essential traffic.

"This does not include essential travel or the transit of goods but it was through mutual discussion that took place between the President and Prime Minister Trudeau and the Department of Homeland Security will be effectuating that decision," Vice President Mike Pence said in a news briefing Wednesday morning.

There are now 7,600 confirmed cases of COVID-19 in the US compared to 600 in Canada. The leaders of both countries say this decision to close the border is a necessary one.

"Travelers will no longer be permitted to cross the border for recreation and tourism in both our countries," Trudeau said.

Meanwhile, flight operations at Chicago's Midway Airport are limited. Hundreds of flights were canceled after at least three technicians in the airport's air traffic control tested positive for COVID-19.

FEMA and US Navy Responding

FEMA, known for responding to natural disasters, is now operating at its highest level to help fight the virus.

Trump said, "This is a very different kind of work for FEMA, but they will come through as they always do."

Tomorrow, the president will hold a teleconference with all the nation's governors to help solidify the federal government's partnership in the crisis with all of the states and US territories.

And the US Navy is preparing to send two hospital ships to New York and Seattle to handle the overflow caused by the epidemic. Each ship can treat up to 1,000 patients.

For now, officials are also asking all other doctors and dentists to postpone elective surgeries for the time being, so all medical resources can be used fighting this pandemic.

During Wednesday's task force briefing, new information was revealed about the potential effect of this disease on young people, who had been thought to be at lower risk.

Dr. Deborah Birx, the coronavirus response coordinator, said, "There are concerning reports coming out of France and Italy about some young people getting seriously ill and very seriously ill in some ICUs. There may be a disproportional number of infections among that group and so even if it's a rare occurrence it may be seen more frequently in that group and be evident now."

Meanwhile, President Trump has referred to the disease as "The Chinese virus." So a reporter asked him Wednesday, "Why do you keep using this? A lot of people say it's racist?" He replied, "It's not racist at all, it comes from China."