Jericho Marchers Praying the Walls of Corruption Will Come Tumbling Down 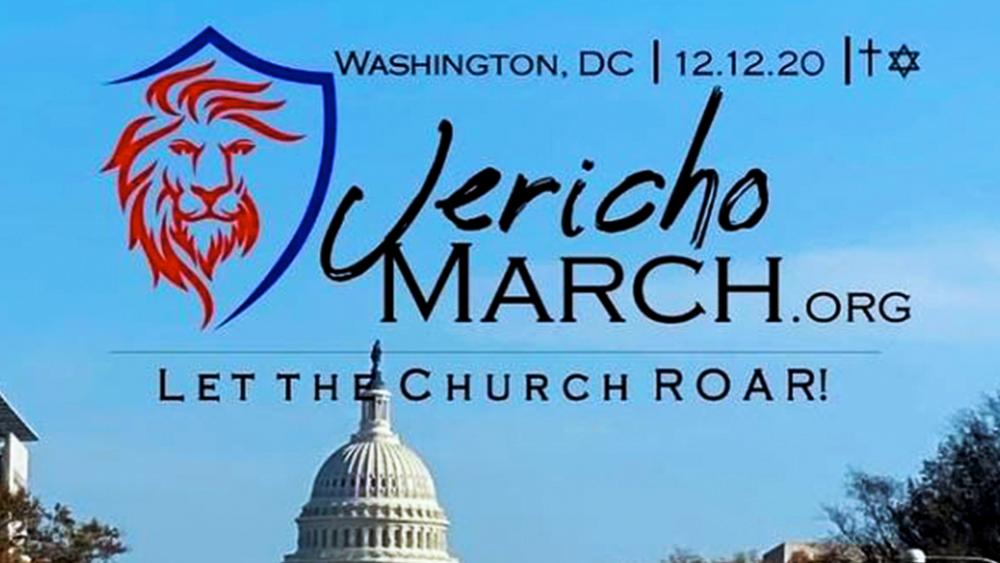 Religious believers are gathering at state capitols around the nation and holding what are known as Jericho Marches. They're showing up to pray, peacefully protest, and march for election integrity, transparency and reform.

A Catholic and an evangelical Christian both individually and separately had a vision on Nov. 5 of doing prayer rallies and marches around the various state capitols.

Then that Catholic – Arina Grossu – and evangelical – Rob Weaver -- met and found out they shared the same vision.

'God Was Calling Us'

Grossu said they then realized, "God was calling us to set up these marches and help mobilize our people – saints and patriots – out around their state capitols, especially in the swing states."

Those are Arizona, Georgia, Michigan, Nevada, Pennsylvania, and Wisconsin.

"We wanted to encourage people to go and peacefully pray, protest and march around their state capitol seven times every single day at noon in collaboration with everyone else until December 14, 2020, when the Electoral College votes," Grossu said.

Inspired by the March around Jericho

Some 700,000 people have become engaged in the marches since the election.

They are inspired by the account in Joshua 6 found in the Bible's Old Testament that tells the story of the Israelites marching around the corrupt walled city of Jericho seven times until the walls came tumbling down.

Today's marchers are hoping to see walls of corruption surrounding the 2020 election come down.

'Want to Make Sure the Election is not Stolen'

"We want election integrity, reform, and transparency," Grossu explained. "We want to know the truth about this election and want to make sure the election is not stolen from the American people."

They now have a website – JerichoMarch.org – dedicated to these marches, most of which are springing up at the grassroots level, organized by local believers called to the same mission as Grossu and Weaver.

Weaver pointed out he thinks God had a point in bringing a Catholic and an evangelical Christian together through a vision to form this Jericho March ministry.

"He wants His church united. He doesn't want all the divisions, because they're just distractions. The vision itself is purposed specifically out of unity, out of love, I believe, from God to our country," he said.

With help from many churches, the planners of The Return, Jim Garlow and Michelle Bachmann's Well Versed World ministry and groups like Eagle Forum, Grossu and Weaver are organizing what they hope will be a huge Jericho March in the nation's capital on December 12 that they're calling "ROAR!"

Details about that national prayer rally will be presented at JerichoMarch.org in the days ahead.

"Our theme for the December 12th event is 'let the church ROAR!'  Because the church is rising up, and we are rising up in prayer," Grossu said. "We know that God can do big, big things and He can move mountains.  And we are showing up and doing our part to pray and be unified in our faithfulness."

Appealing to Officials, the Courts of Heaven & the Court of Public Opinion

Grossu said as well as marching, the Jericho March ministry is asking people to contact their state officials, "And demand full audits, that any and all fraudulent and illegal activities are exposed, and that only legal votes are counted to reveal what the true will of the American people is in this election."

But they pointed out marchers aren't just appealing to officials.

"God has shown us three very clear things: that there are courts in heavens – which our marchers are taking to in prayer before the Lord – then there are the U.S. courts, the courts on earth -- and then there's the court of public opinion," Weaver said. "We believe that God has called us and the Church, in general, to focus on the courts in heaven as well as the court of public opinion."

This has become much bigger than Grossu and Weaver expected. At the start, they were helping organize marches on the various swing state capitols.

Many Marches Bubbling Up All on Their Own

"But to our amazement, God had people literally going to every state capitol. We were getting reports of people even marching around their courthouses," Weaver recalled.

The ministry is encouraging it all. Weaver said, "We want people to go out to the places they'll march on their own, in a group. Many times their churches are going out. People go on their lunch break. It's really kind of amazing how it works. And they're being self-led."

"This has been very organic, that different groups are rising up," Grossu said. And the ministry is hoping that sort of grassroots level movement can continue.

'We Want to Keep it Simple'

"People don't need to do a lot of planning. They just bring themselves and their families. And if there's a church group or a youth group that wants to go and pray at noon, they just do so. So it doesn't require a lot of planning, except for just getting there and deciding what they're going to pray," Grossu explained.

She continued, "We want to keep it simple. It's not to be a production. It's just people of faith coming together to pray."

In one attempt at organization, Grossu said, "We've asked for volunteers and state coordinators to rise up. On the 'Contact Us' portion of the website, there's a form they can fill out and check the box if they want to be a state coordinator."