Severe Storms to Take Aim at the East Coast 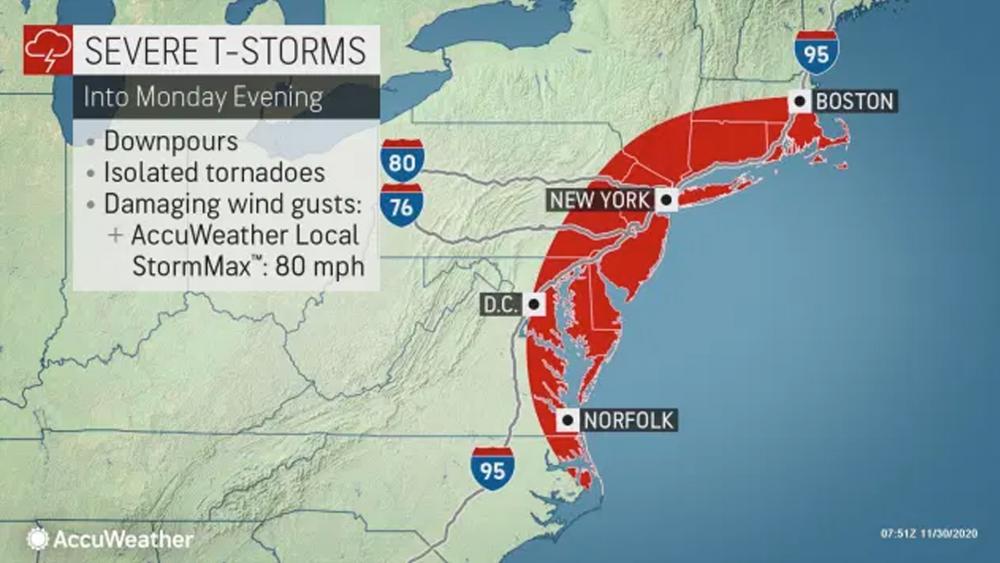 A strengthening storm has begun to unleash major impacts across much of the eastern half of the country early this week.

On Monday, this storm system will dump snow over the Midwest and bring drenching rain to the Northeast. While that occurs, this system will also trigger the threat for severe weather to portions of the East Coast.

A storm slowly brewed over the northern Gulf of Mexico during Friday and Saturday before it strengthened and picked up forward speed during Sunday night. Rain already spread well north across the mid-Atlantic and into the Northeast early Monday morning.

As this system moved northward over the interior South, it tapped into plenty of atmospheric fuel to deliver drenching rain and even a few severe thunderstorms from the Gulf Coast to the interior Southeast into early Monday. One such storm was reported to have caused some structural damage in addition to taking down trees and power lines in northern Florida's Madison County.

Outside of the threat for severe weather, much of the Southeast, Gulf Coast, and even portions of the Ohio Valley had a soggy Sunday.

The threat for severe thunderstorms will shift almost completely to the upper part of the Atlantic coast into Monday evening as the storm system intensifies and the main center tracks along the spine of the Appalachians.

However, heavy, gusty thunderstorms can erupt through the afternoon hours in parts of the Florida Peninsula, eastern North Carolina, and coastal South Carolina.

"Strong-to-severe thunderstorms may track through cities like Philadelphia, New York City, and even Boston into Monday evening," Pydynowski added.

Other cities that may end up in the direct path of these damaging storms include Norfolk, Virginia; Washington, D.C.; Dover, Delaware; Ocean City, New Jersey; and Allentown, Pennsylvania.

Very strong winds located higher in the atmosphere, just above the surface will be howling across much of the northeastern quarter of the United States through Monday. Any stronger storm that develops into Monday evening will not have to work too hard to be able to tap into strong winds aloft and bring them crashing down to the surface.

Into Monday evening, the most prevalent threat with any strong thunderstorms that rumble to life will be damaging wind gusts with an AccuWeather Local StormMax™ of 80 mph. The strong winds can occur even without any thunder or lightning. 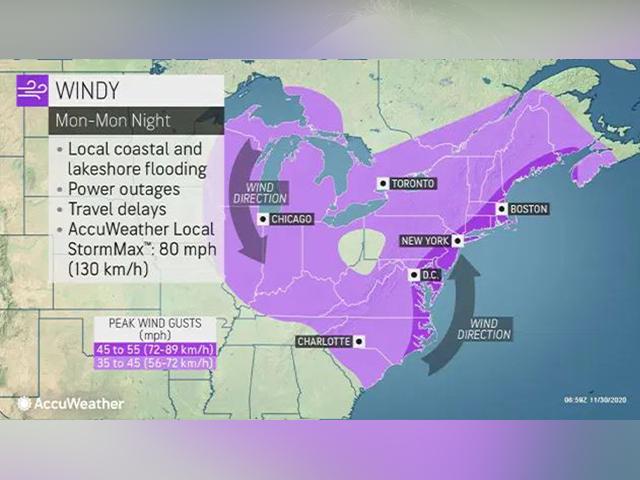 Winds of this magnitude will be strong enough to damage trees and even take down some power lines, leading to sporadic power outages. Heavy downpours can also occur in strong storms and may lead to localized flash flooding issues.

However, for some across the eastern U.S. into Monday evening, an additional threat may be tacked on to the list -- isolated tornadoes.

"Isolated tornadoes cannot be ruled out across parts of the mid-Atlantic given the setup," Pydynowski cautioned.

Tornadoes have impacted portions of the mid-Atlantic in November in recent history. On Nov. 2, 2018, at least three tornadoes were confirmed to have inflicted damage on portions of Virginia and Maryland. One of these tornadoes was responsible for two deaths and an additional injury in Baltimore, Maryland.

"Despite the fact that Monday is the last day of November, residents across the East will need to keep an eye to the sky for rapidly changing conditions."