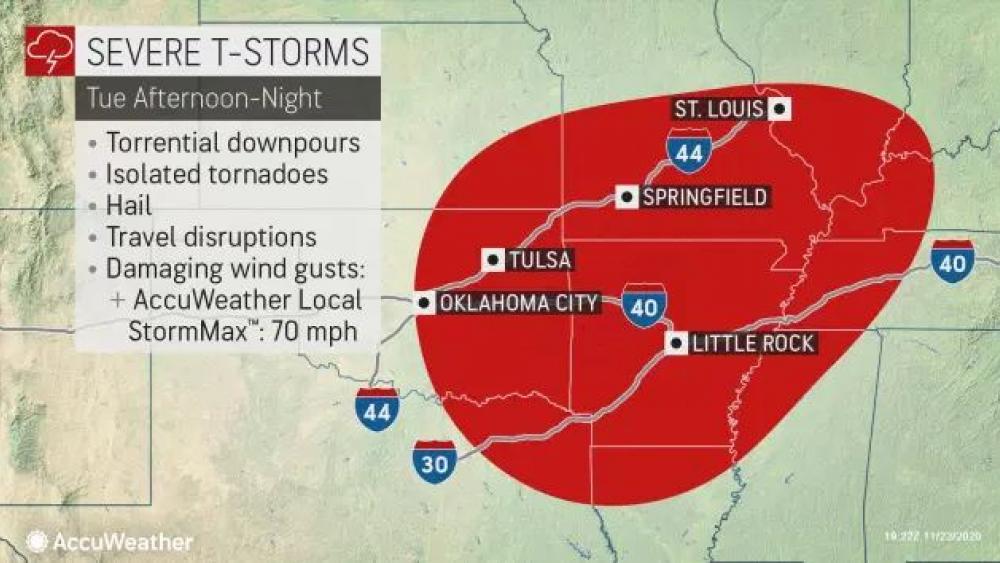 Some storms are expected to bring winds strong enough to knock down trees, trigger power outages and cause turbulence for airline passengers. Brief, torrential downpours associated with some of the storms can create hazards for motorists ranging from excess water on the roads to sudden poor visibility.

AccuWeather Global Weather Center – November 24, 2020 –  Thunderstorms could become strong enough to cause damage, power interruptions and interfere with holiday travel from the eastern Texas Panhandle to the southern parts of Illinois and Indiana and western portions of Kentucky, Tennessee and Alabama Tuesday and Wednesday.

The weather system behind the feisty thunderstorms is the same storm set to produce heavy snow in the Colorado Rockies and a broad area of light to moderate snow over the Upper Midwest on Tuesday.

A major outbreak of severe weather is not predicted. However, some of the storms are expected to bring winds strong enough to knock down trees, trigger power outages and cause turbulence for airline passengers. Brief, torrential downpours associated with some of the storms can create hazards for motorists ranging from excess water on the roads to sudden poor visibility.

A small number of the strongest storms will have the potential to produce large hail and perhaps even spawn a couple of tornadoes.

At this time it appears the greatest risk for a few tornadoes is from just west of Oklahoma City to the north-south portion of the Texas and Oklahoma border during Tuesday afternoon and early Tuesday evening.

The severe weather threat, including the tornado potential, will remain active during Tuesday night as storms push into northwestern Louisiana, central Arkansas and southwestern Missouri. 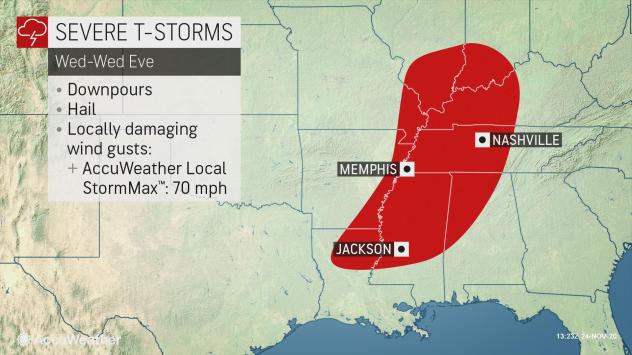 "On Wednesday, the storms are forecast to progress eastward across the Mississippi River and reach portions of southern Illinois, southern Indiana, western and middle Tennessee, western and central Kentucky, central and northern Mississippi and northwestern Alabama," Anderson said.

By Wednesday, the storms, perhaps in the form of torrential downpours with strong winds are likely to become organized into a solid line that will progress from west to east at a steady pace. Strong to severe storms may roll through cities such as Memphis and Nashville, Tennessee; Jackson, Mississippi; Cape Girardeau, Missouri; Huntsville, Alabama; and Paducah, Kentucky, during Wednesday.

Downpours with thunder and lightning can extend all the way to the north as central Indiana and much of Ohio on Wednesday.