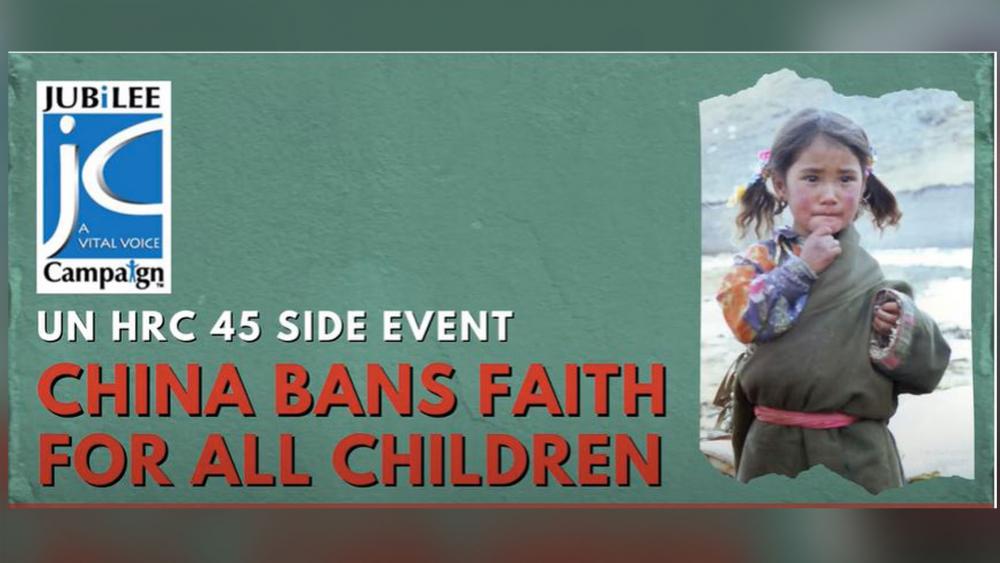 On Oct. 5, the Jubilee Campaign, a non-profit organization that promotes the human rights and religious liberty of ethnic and religious minorities, hosted a side event to the United Nations Human Rights Council's 45th Session which was titled China Bans Faith for All Children.

The event, which featured both expert speakers as well as survivors of persecution in China, was meant to inform international activists about China's violations of the United Nations Convention on the Rights of the Child with regards to the rights to religious freedom.

Article 14 of the UN Convention on the Rights of the Child (CRC) stipulates that "States Parties shall respect the right of the child to freedom of thought, conscience and religion" and that "States Parties shall respect the rights and duties of the parents and, when applicable, legal guardians, to provide direction to the child in the exercise of his or her right in a manner consistent with the evolving capacities of the child."

"Article 14 of the Convention on the Rights of the Child states that 'State parties shall respect the right of the child to freedom of thought, conscience, and religion.' China's constitution in article 36 also protects the right of children to seek religious belief. And yet the reality...in China is far different," said The Heritage Foundation's Emilie Kao, the event's keynote speaker.

Despite these protections, however, the Chinese Communist Party (CCP) has consistently violated children's rights to freedom of religion or belief, and China's Christian, Tibetan Buddhist, Uyghur, and Falun Gong children continue to face persecution and harassment in virtually all aspects of their lives.

The Jubilee Campaign and others argue that, in addition to violating Article 14, the Chinese Communist Party also violates Article 13 on the right to freedom of expression as well as Article 30 on the rights of cultural, ethnic, religious, and linguistic minorities to "enjoy his or her own culture, to profess and practice his or her own religion, or to use his or her own language."

To read the Jubilee Campaign's report on China, CLICK HERE.

Watch the UN HRC 45 Side Event - China Bans Faith For All Children below: