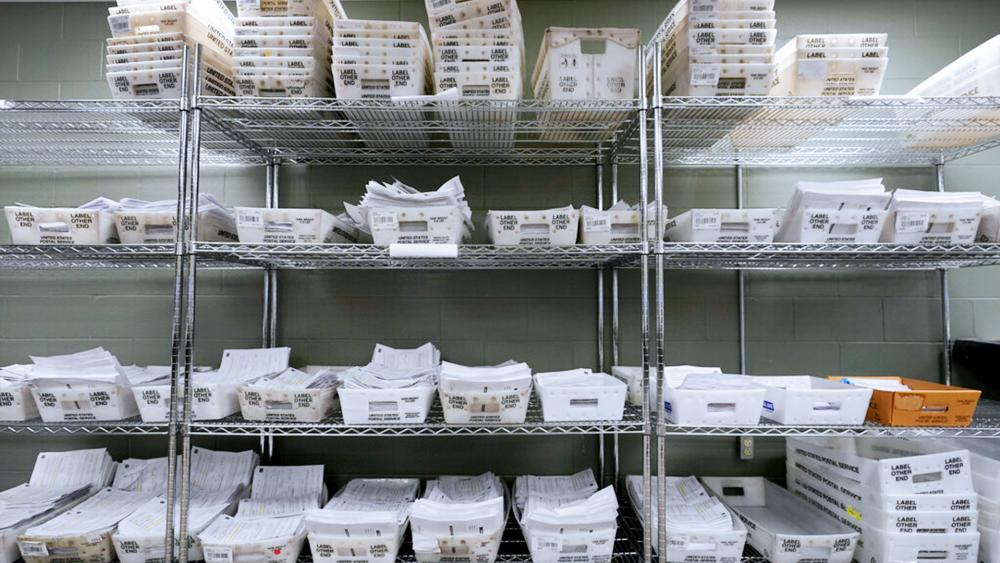 Since the COVID 19 pandemic began last spring, President Donald Trump has been pressing a months-long campaign against mail-in voting this November by tweeting and speaking out against the practice of mass-mailing ballots to people who haven't even requested them.

Time and again, the mainstream media has sneered against his suggestion that widespread availability of mail-in ballots could lead to massive fraud. Now comes word of two examples of mail-in voter fraud.

The Longview News-Journal reports a Gregg County, Texas commissioner, and three other people were arrested in connection with a vote-harvesting scheme during the 2018 Democratic primary election.

The state filed 134 felony charges against the four defendants, including engaging in organized election fraud, illegal voting, fraudulent use of an application for a mail-in ballot, unlawful possession of a mail-in ballot, tampering with a governmental record, and election fraud. Penalties for these offenses range from six months in state jail to 99 years in prison.

Gregg County Elections Administrator Kathryn Nealy said in May 2018, she suspected voter fraud in the race for the Gregg County Commissioner's seat after 231 of the mailed ballots bore the signatures of five people who assisted voters, according to the Longview News-Journal. Later that month, state officials announced the state was investigating the number of mail-in ballots cast in the 2018 Democratic primary race for the Pct. 4 commissioner in Gregg County.

"It is an unfortunate reality that elections can be stolen outright by mail ballot fraud. Election fraud, particularly an organized mail ballot fraud scheme orchestrated by political operatives, is an affront to democracy and results in voter disenfranchisement and corruption at the highest level," Attorney General Paxton said in a statement. "Mail ballots are vulnerable to diversion, coercion, and influence by organized vote harvesting schemes."

Meanwhile, the Justice Department (DOJ) is investigating discarded mail-in ballots cast for the President in Pennsylvania.

The Washington Times reports the DOJ said it discovered that military ballots cast for President Trump in Luzerne County were discarded.

"At this point, we can confirm that a small number of military ballots were discarded," said David Freed, US Attorney for the Middle District of Pennsylvania. "Investigators have recovered nine ballots at this time. Some of those ballots can be attributed to specific voters and some cannot. Of the nine ballots that were discarded and then recovered, 7 were cast for presidential candidate Donald Trump. Two of the discarded ballots had been resealed inside their appropriate envelopes by Luzerne elections staff prior to recovery by the FBI and the contents of those 2 ballots are unknown."

The DOJ said Thursday it began its investigation into the county's board of elections after receiving a request from the county's district attorney.

The Heritage Foundation, a research and educational institution whose mission is to build and promote conservative public policies, has released a report of recent election fraud cases from across the country.

According to the foundation's database, there have been 1,298 recently proven instances of voter fraud. These cases include examples of impersonation fraud at the polls, false registration, duplicate voting, fraudulent use of absentee ballots, buying votes, illegal assistance at the polls, ineligible voting, altering the vote count, and ballot petition fraud.

FBI Director Christopher Wray responding to a question on the security of mail-in voting to the Senate Homeland Security Committee on Thursday said the agency has "not seen, historically, any kind of coordinated national voter fraud effort in a major election, whether it's by mail or otherwise," Axios reported.

However, in an interview with CBS This Morning on Friday, White House Chief of Staff Mark Meadows dismissed Wray's comments. "With all due respect to Director Wray, he has a hard time finding emails in his own FBI," he said.

"This is a very different case," the White House chief of staff told CBS News. "The rules are being changed, and so what I'm suggesting is perhaps Wray ... in North Carolina and other places where multiple ballots, duplicate ballots, are being sent out, perhaps he needs to get involved on the ground and then he would change his testimony on Capitol Hill."