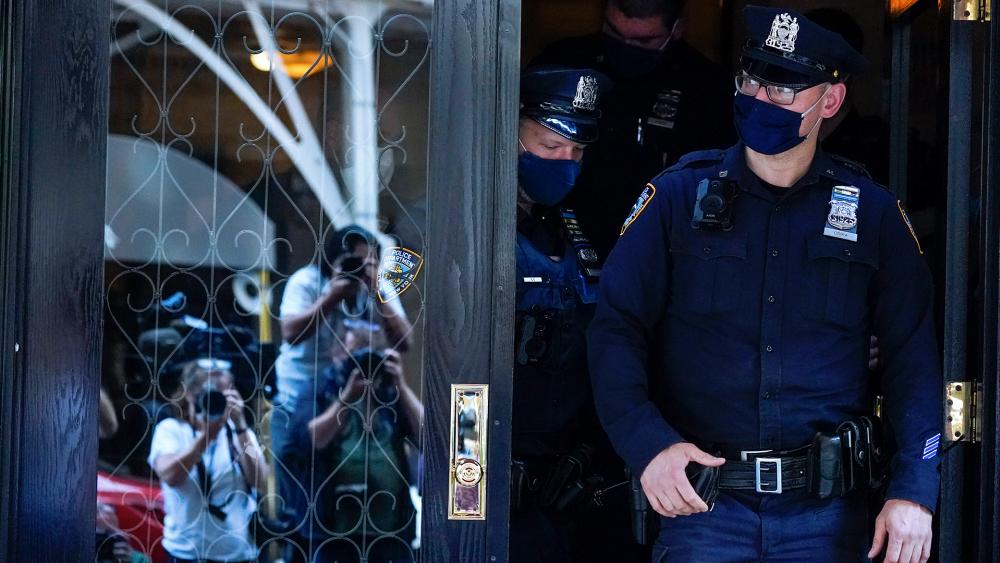 Members of the media are reflected in the window a door as New York City Police officers walk out of the apartment building where former New York Mayor Rudy Giuliani resides, Wednesday, April 28, 2021, in New York. (AP Photo/Mary Altaffer)

They also raided his offices, confiscating a long-time aide's computer.

Giuliani is under investigation for potentially breaking federal lobbying laws in his business dealings in Ukraine as well as attempts to influence Ukraine's government to investigate Joe Biden's son, Hunter, who served on the board of a Ukraine energy company.

Giuliani, the 76-year-old former New York City mayor once celebrated for his leadership after 9/11, has been under federal scrutiny for several years over his ties to Ukraine. The dual searches sent the strongest signal yet that he could eventually face federal charges.

Agents searched Giuliani's Madison Avenue apartment and Park Avenue office, people familiar with the investigation told The Associated Press. The warrants, which required approval from the top levels of the Justice Department, signify that prosecutors believe they have probable cause that Giuliani committed a federal crime — though they do not guarantee that charges will materialize.

A Justice Department spokesperson did not immediately respond to a request for comment. The U.S. Attorney's office in Manhattan and the FBI's New York office declined to comment.

The full scope of the investigation is unclear, but it at least partly involves Giuliani's dealings in Ukraine, law enforcement officials have told the AP.

In a statement issued through his lawyer, Giuliani accused federal authorities of a "corrupt double standard" and said that the Justice Department was "running roughshod over the constitutional rights of anyone involved in, or legally defending, former President Donald J. Trump."

"Mr. Giuliani respects the law, and he can demonstrate that his conduct as a lawyer and a citizen was absolutely legal and ethical," the statement said.

Trump told Fox Business on Thursday that Giuliani was "the greatest mayor in the history of New York" and "a great patriot."

"It's very, very unfair," he said of what happened Wednesday. "Rudy loves this country so much, it is so terrible when you see things that are going on in our country with the corruption and the problems and then they go after Rudy Giuliani."

Giuliani's lawyer, Robert Costello, said the warrants involved an allegation that Giuliani failed to register as a foreign agent and that investigative documents mentioned John Solomon, a former columnist and frequent Fox News commentator with close ties to Giuliani, who pushed allegations involving Ukraine and Biden during the 2020 election.

The federal Foreign Agents Registration Act requires people who lobby on behalf of a foreign government or entity to register with the Justice Department. The once-obscure law, aimed at improving transparency, has received a burst of attention in recent years — particularly during Bob Mueller's Russia probe.