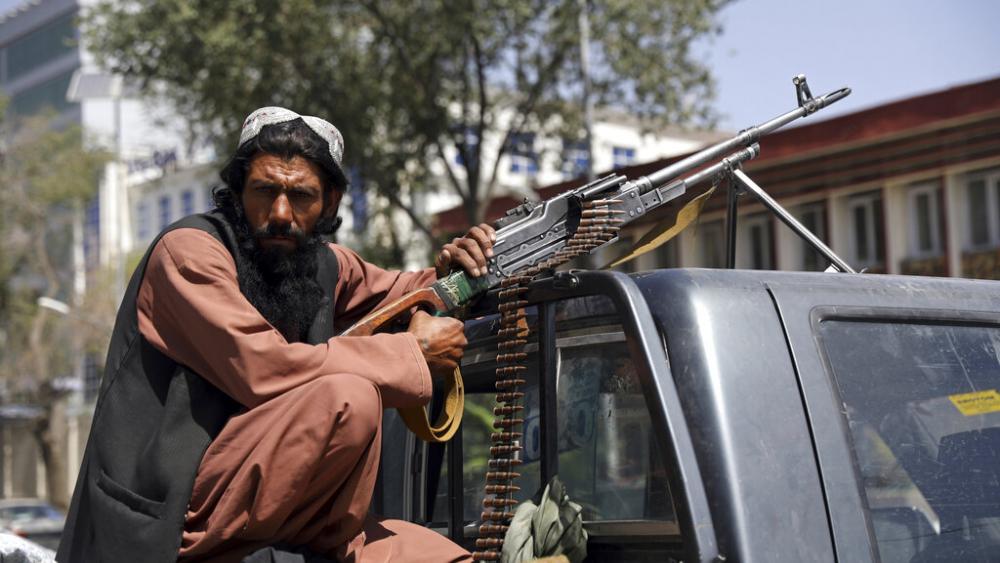 A Taliban fighter sits on the back of a vehicle with a machine gun in front of the main gate leading to the Afghan presidential palace, in Kabul, Afghanistan, Monday, Aug. 16, 2021. (AP Photo/Rahmat Gul)

Willink declared in a Facebook post published Monday that there “is evil in the world” and it “will grow in strength and power” if it’s not thwarted.

“The only thing that can stop evil is people willing to stand and fight and sacrifice to destroy it,” he wrote. “When there is no will to fight, evil will win. Innocent people will suffer. Darkness will expand.”

“But there are people who do have the will to fight,” continued Willink. “They will never surrender to the tyranny of evil. I served with many of these men and women. The battle is fraught with blood and tears. Failure and defeat. Anguish and loss. But the good and brave souls will hold the line and, in the end: Righteousness will prevail. Freedom is not free.”

Fellow Navy SEAL Rob O’Neill, the soldier who killed al Qaeda leader Osama bin Laden in 2011, rebuked the Biden administration over its handling of the situation in Afghanistan.

He demanded the resignation of U.S. Army Gen. Mark Milley, the chairman of the Joint Chiefs of Staff.

There are Afghans falling to their deaths off of our retreating aircraft. Has @thejointstaff resigned yet?

It was reported late Monday morning that President Joe Biden ordered 1,000 more U.S. soldiers into Afghanistan, bringing the total number of American troops to 7,000 since the start of the withdrawal process, which began earlier this year.

The insurgence of troops comes as the U.S. has had difficulty securing control of the Karzai International Airport in Kabul, a central checkpoint for the U.S. and other countries airlifting citizens and refugees from Afghanistan.

Shocking footage shared widely on social media showed desperate Afghanis clinging to the side of a U.S. military aircraft as it rolled down the Tarmac.

On Sunday, Taliban forces took over checkpoints around Kabul after claiming Bagram Air Base. The terror group on the same day released thousands of “prisoners,” many of whom are senior al Qaeda operatives.

All of this unfolded weeks after Biden claimed it would never happen.

This may become the most infamous — and devastating — press conference ever held by an American President. pic.twitter.com/j4kKwyPDVm

About six weeks ago, when reporters pressed him on the Taliban’s advancements, Biden said there was “going to be no circumstance where you see people being lifted off the roof of a Embassy of the United States from Afghanistan.”

He went on to say the “likelihood there’s going to be the Taliban overrunning everyone and owning the whole country is highly unlikely.”

That promise from the president has turned out to be entirely untrue.

US helicopters seen this morning at US embassy Kabul. It seems the evacuation is underway. Photo by @AP pic.twitter.com/YxMQQeRF29

"What is abnormal is the scale of American helicopters circulating around the area of the embassy. I have not seen anything like this in 20 years, in terms of the volume," @npwcnn reports from Kabul. pic.twitter.com/M46RUmEMqX