Dems Call for Trump Cabinet to Use 25th Amendment to Remove Him, Big Tech Locks His Accounts 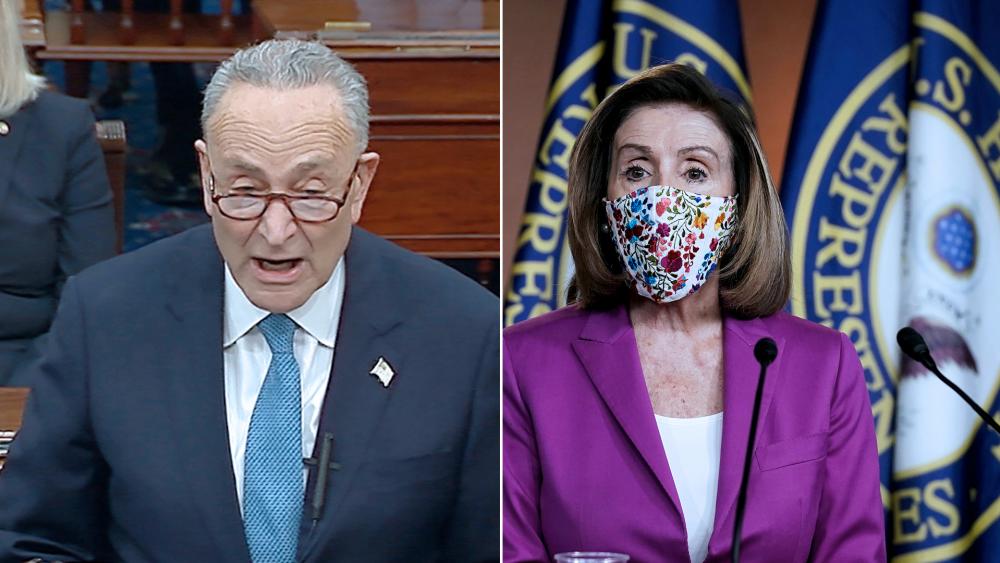 House Speaker Nancy Pelosi and  Senate Democratic Minority Leader Chuck Schumer (D-NY) are both calling on President Donald Trump's cabinet to remove him from office following Wednesday's takeover of the US Capitol building by rioters.

Pelosi threatened that if Vice President Pence doesn't remove Trump from office then she "may be forced to move forward with impeachment."

In a statement released Thursday, Schumer said the attack on the Capitol "was an insurrection against the United States, incited by the president." He added, "This president should not hold office one day longer."

Schumer said Vice President Mike Pence and the Cabinet should invoke the 25th Amendment and immediately remove Trump. He added, "If the vice president and the Cabinet refuse to stand up, Congress should reconvene to impeach the president."

Democrats want immediate action even though Joe Biden is set to be sworn in as president in less than two weeks, on January 20.

The 25th Amendment allows for the vice president and a majority of the Cabinet to declare a president unfit for office. The vice president then becomes acting president. The section of the amendment specifically addressing this procedure has never been invoked.

In a two-minute video released on social media, Rep. Adam Kinzinger (R-IL) also called for President Trump's cabinet to invoke the 25th Amendment and remove him from office.

It's with a heavy heart I am calling for the sake of our Democracy that the 25th Amendment be invoked. My statement: pic.twitter.com/yVyQrYcjuD

As CBN News reported, President Trump issued multiple tweets telling protestors to remain peaceful. He also issued a video telling protesters to go home and restore peace. But during the video he said the election was rife with fraud, so Twitter has now deleted the video and has frozen the account of the sitting president of the United States, threatening him with permanent suspension.

Twitter said Thursday that it's still evaluating whether to lift or extend what started as a 12-hour lockdown of Trump's account.

This lockdown of Trump's accounts could be extended indefinitely.

YouTube, which is owned by Google, also announced more general changes that will penalize accounts that post videos about voter fraud in the 2020 election, with repeat offenders facing permanent removal from the platform.

In a statement Thursday morning, Trump said there would be an "orderly transition on January 20th" and acknowledged defeat in the election for the first time. His aides posted the statement on Twitter because the president's account remained suspended.