Pelosi: Relationship Between Israel and US is 'Ironclad' 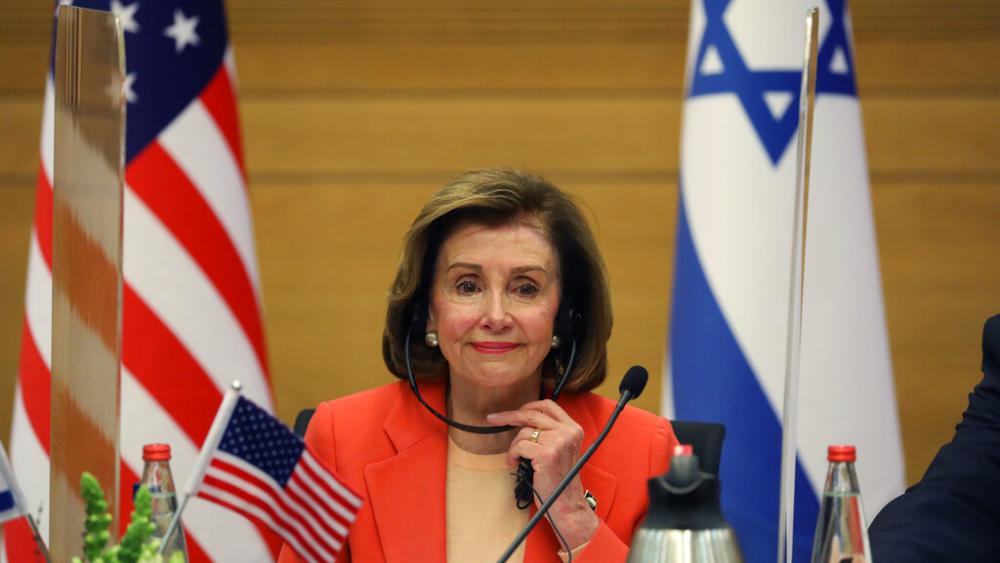 U.S. Speaker of the House of Representatives Nancy Pelosi at the Israeli Parliament, in Jerusalem, Israel, Wednesday, Feb. 16, 2022. (AP Photo)

JERUSALEM, Israel – US House Speaker Nancy Pelosi said on Wednesday the bond between Israel and the United States is “ironclad” and Washington shares Jerusalem’s concerns about the Iranian nuclear program.

Pelosi is leading a delegation of lawmakers to the Holy Land this week. She told Israeli leaders during a speech at Israel’s parliament on Wednesday that Israel’s security is important to the US.

“The US remains ironclad, I keep using that word, in our support of Israel’s security and its regional stability,” said Pelosi.

She also emphasized the importance of stopping Iran’s nuclear development.

“We are together in the fight against terrorism posed by Iran, both in the region and also its nuclear development. The nuclear threat by Iran is a global one. It is a threat to the world,” Pelosi said.

“Iran is a terror state whose actions are aimed at wreaking havoc and destruction in every corner of the world. We remember the firm support of the United States for Israel’s security throughout history,” Levy said.

The visit comes amid tense negotiations in Vienna between world leaders and Iran to restore the 2015 Iran nuclear deal, which restricted Tehran’s nuclear program in exchange for sanctions relief. The deal collapsed in 2018 after former US President Donald Trump unilaterally abandoned it.

Since then, the US has reimposed sanctions and Iran has dramatically ramped up its nuclear activities, amassing a stockpile of enriched uranium that goes well beyond the limits set by the original nuclear deal.

While the US and Israel agree that Iran should never become a nuclear power, they have deep differences over how to stop Iran’s nuclear program.

Israel has said it is not bound by the nuclear agreement and has threatened military action against the Islamic republic. Iran insists its nuclear program is only for civilian purposes.

During her visit, Pelosi also reiterated the Biden administration’s commitment to Palestinian statehood, which is opposed by Israeli Prime Minister Naftali Bennett.

“Our delegation is also here to reaffirm America’s commitment to a just and enduring two-state solution, one that embraces, enhances stability and security for Israel, Palestinians and their neighbors,” Pelosi said.

While Speaker Pelosi says the United States’ relationship with Israel is “ironclad” there is a vocal minority within the Democrat Party that has taken strong stands against the Jewish state, most notably members of the so-called “Squad.”  Squad member Rep. Ilan Omar (D-MN) has accused Israel of committing “unthinkable atrocities” like Hamas and the Taliban.  Meanwhile, Democratic Rep. Rashida Tlaib (D-MI) denounced Israel as an “apartheid state” during a debate last year over a bill to fund Israel’s Iron Dome anti-missile system. Despite a brief, unsuccessful effort from several progressive Democrats to block Iron Dome funding, Democrats overwhelming passed the legislation, and Pelosi says she hopes the funding will be passed in the Senate “soon.”

While the majority of Democrats support the Israel Relations Normalization Act, which promotes the normalization of relations between Israel and Arab states in the region, dozens of the Congressional Progressive Caucus, including Rep. Lee, a member of Pelosi's delegation, do not support the legislation.