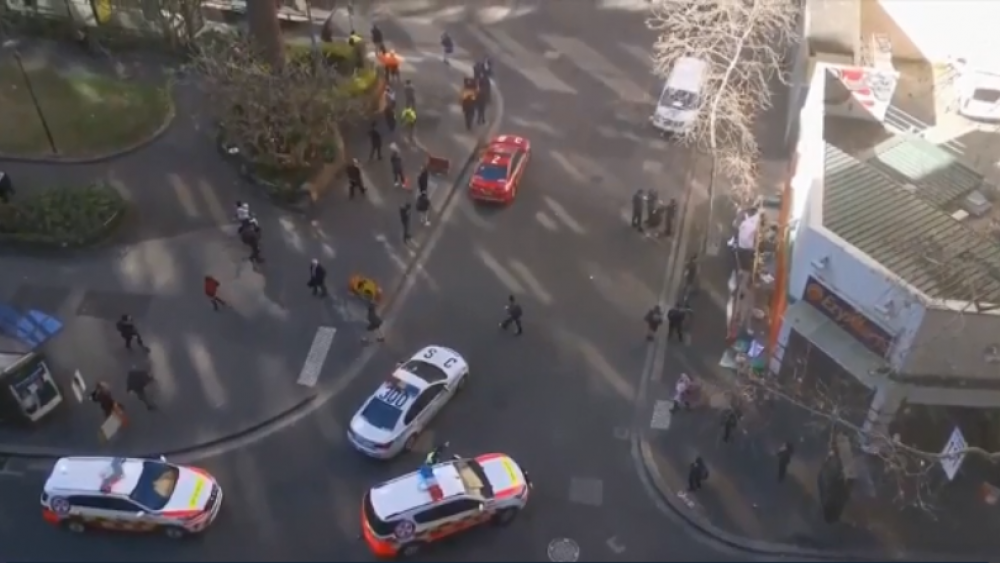 SYDNEY (AP) - A knife-wielding man with a history of mental illness is suspected of slaying a woman in a downtown Sydney apartment before wounding another woman nearby and attempting to stab other people Tuesday while yelling "Allahu akbar," or "God is great," police and witnesses said.

Police have not labeled the rampage an act of terrorism, although the 21-year-old assailant - who was restrained by members of the public before being arrested - had collected information on his computer about mass killings in North America and New Zealand, New South Wales state Police Commissioner Michael Fuller said.

"It is not currently classed as a terrorist incident. Obviously, as the investigation continues we will reassess that," Fuller told reporters.

"He is by definition, at the moment, a lone actor. Information was found on him that would suggest he has some ideologies in relation to terrorism, but he has no links to terrorism," Fuller said. "There was certainly information found on him about other crimes of mass casualties and mass deaths around the world."

A gunman who recently killed 22 people at a Texas Walmart appears to have praised the March 15 shootings in Christchurch, New Zealand, where an Australian white supremacist is charged with killing 51 worshippers at two mosques.

Witnesses said the assailant Tuesday was carrying a 30-centimeter (12-inch) knife and attempted to stab multiple people near a busy intersection in Australia's largest city at around 2 p.m. Fuller described the weapon as a butcher's knife.

Just witnessed incredible bravery from members of the public and ⁦@FRNSW⁩ officers chasing down a man on a stabbing rampage in Sydney’s CBD. He is now under arrest. ⁦@7NewsSydney⁩ pic.twitter.com/wNKatejHVp

Police said a man was arrested, and that a 41-year-old woman with a stab wound to her back was taken to a hospital in stable condition.

Police said the body of a 21-year-old woman was later discovered in a nearby fourth-floor apartment.

Video showed that people pinned the man to the pavement on his back with a plastic milk crate over his head and two chairs over his body.

Wood said it appeared that the attack was unprovoked. The man "attempted to stab multiple people. Those attempts, thankfully, were unsuccessful," Wood said.

Uber driver Leon Baghani said the assailant, clutching a knife, jumped on the hood and then the roof of his Mercedes as he was driving an elderly couple on the street where the violence occurred.

"For a second, I thought maybe he's wearing a vest of some sort and he's going to detonate himself," Baghani told Ten Network television. "So I quickly accelerated and made a left turn and made sure that he came off the roof of the car."

A witness told reporters that the man was screaming comments about religion, before yelling to police that he wanted to be shot. Police said he used the Arabic phrase "Allahu akbar."

A witness, Paul O'Shaughnessy, said he and his brother Luke were working in the office of their recruitment company when they heard shouting through an open window. They looked out and saw a Caucasian man screaming "extremist" words, O'Shaughnessy said.

The brothers, fearing the man was conducting a terrorist attack, ran down to the street and began chasing the man, who was covered in blood.

Paul O'Shaughnessy told The Associated Press that the man "didn't show any remorse at all."

Prime Minister Scott Morrison said on Twitter that the violence was "deeply concerning" and praised the people who restrained the assailant.