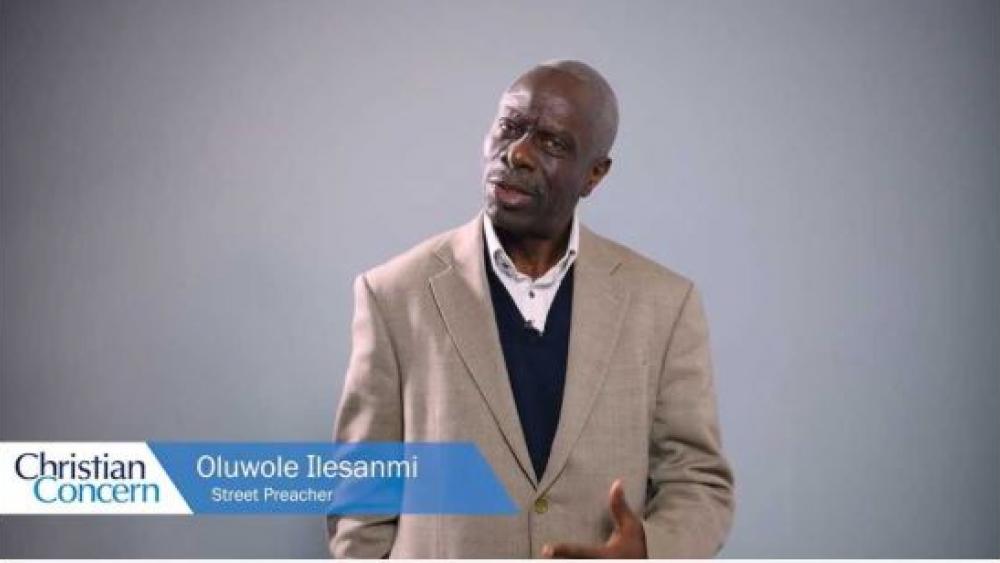 Oluwole Ilesanmi, the Nigerian man who was arrested in London for simply preaching the Gospel, has spoken out following his release. “Olu” was simply quoting Scripture and preaching the good news of Jesus to anyone who would listen when, on Feb. 23, he was accosted by two police officers and arrested for “breaching the peace.”

The Metropolitan police told Faithwire that, after it became clear that Olu had done nothing wrong, he was subsequently “de-arrested” and no charges were filed. Wednesday, it was announced that an investigation had been launched into the shocking incident.

“I was the one arrested,” Olu said in a video produced by UK anti-persecution watchdog, Christian Concern.

“The police came on the scene and yanked me away,” he continued. “I was taken out of the vicinity into a very remote place, thinking I would not even be able to get back.”

Despite having no money and being left by the police in an unfamiliar neighborhood, Olu said that “God raised for me people in the streets that could be of assistance.”

After finding his way back to Southgate Tube Station in North London, Olu said he “started preaching again the word of God.”

The video of Olu’s arrest sparked outrage across the globe, with many sending in messages of support for the bold preacher.

“My appreciation goes to everybody all over the world,” Olu said.

“I am well, I am OK,” he added. “No evil, as the Word has said, will come near my dwelling. God has been so faithful.”

“I thank you all for what you have done for me,” he concluded.

The Christian Legal Center, which is part of Christian Concern and advocates on behalf of those persecuted for their faith, told Faithwire that, in light of Olu’s shocking case, it would be lobbying the UK government for the granting of more protections to those who are preaching in the public square.

“We will shortly be launching a petition to the government calling for greater protection for Christian street preachers in the UK from the police,” a spokesperson told Faithwire.

What Does the Petition Say?

Addressed to the British Home Secretary, the petition urges that “Christian street preachers should be free to share the gospel, even where it means challenging the beliefs of others.”

It continues: “The law rightly protects freedom of speech, even if it offends, shocks or disturbs others. But too often, police officers have shown themselves either to be ignorant of this freedom, or unwilling to uphold it. This leads to a chilling effect, where people are increasingly unwilling to say what they believe, for fear of arrest.”

The petition concludes: “Please urgently investigate what guidance and training is being given to police officers nationwide to ensure that they protect the freedom to preach in public.”

In a video of the incident posted to Twitter, officers can be seen forcefully asking the preacher to stop, before arresting him on a rather baffling charge of “breaching the peace.”

A Christian preacher this afternoon was arrested at Southgate station London N14 for preaching about Jesus . @CConcern the police told him it’s because public had said he was being islamophobic . We have the full video and wondered when preaching was now illegal ? @Campaign4T pic.twitter.com/ZxC1DhlZCf

“What are you doing here?” the officer asked the preacher, who was heralding the Gospel near Southgate Underground station in London.

“I am preaching,” he simply replied.

“I am going to require you to go away,” the police officer stated.

“Well then, then I will arrest you for a breach of peace,” the police said.

“What breach of peace?” asked the Christian man.

“It’s what you’re doing at the moment,” the policeman explained. “You’re causing problems — you’re disturbing people’s days and you’re breaching their peace. If you won’t go away voluntarily, we will have to arrest you.”

“I will not go away, because I need to tell them the truth — because Jesus is the only way, the truth and the life,” the preacher responded.

“But nobody wants to listen to that,” the officer snapped. “They want you to go away.”

At this point, the officer handcuffed the man, before an additional officer snatched his Bible out of his hands.

“Don’t take my Bible away,” the man cried.

“You should have thought about that before being racist!” the officer replied.

Faithwire reached out to the Metropolitan Police for more information surrounding the incident. The police admitted that, despite the officer’s comments accusing the preacher of being “racist,” they have no reason to believe that anything of this nature had been said by the Christian man. They also noted that “no language of this nature was used in the presence of officers.”

“The initial report suggested some Islamophobic language had been used,” the police force told Faithwire. “However nobody has made a formal allegation to this effect and no language of this nature was used in the presence of officers.”

The police added that the man was subsequently “de-arrested” and that “no further action was necessary.”

According to Christian Concern, Olu was “was dropped off in an unfamiliar suburb without enough money to get home” following his shocking arrest.

“Thankfully, a kind member of the public gave him some money, but what did the preacher do next?” the group’s Facebook post added. “He went straight back to Southgate tube station and continued to preach the gospel of Jesus Christ that same evening.”

What is the law on free speech in the UK?

The United Kingdom’s free speech laws are governed by the Human Rights Act 1998, which incorporates the European Convention on Human Rights (ECHR). Article 10, the section that relates to freedom of expression, reads as follows:

“Everyone has the right to freedom of expression. This right shall include freedom to hold opinions and to receive and impart information and ideas without interference by public authority and regardless of frontiers.”

Of course, this comes with responsibility.

As Article 10 states, these freedoms “may be subject to such formalities, conditions, restrictions or penalties as are prescribed by law and are necessary in a democratic society, in the interests of national security, territorial integrity or public safety, for the prevention of disorder or crime, for the protection of health or morals, for the protection of the reputation or rights of others, for preventing the disclosure of information received in confidence, or for maintaining the authority and impartiality of the judiciary.”

As such, an arrest made on account of “breaching the peace,” must only be enforced if the police officer is convinced that “a breach of the peace had or would occur” and that “it related to harm which was actually done or likely to be done to a person or, in his/her presence, their property.”

Clearly, these criteria were not met by the behavior exhibited by Olu the street preacher and thus to arrest him on this particular charge was, by all accounts, fundamentally wrong.

We will keep you posted with any updates on this case.