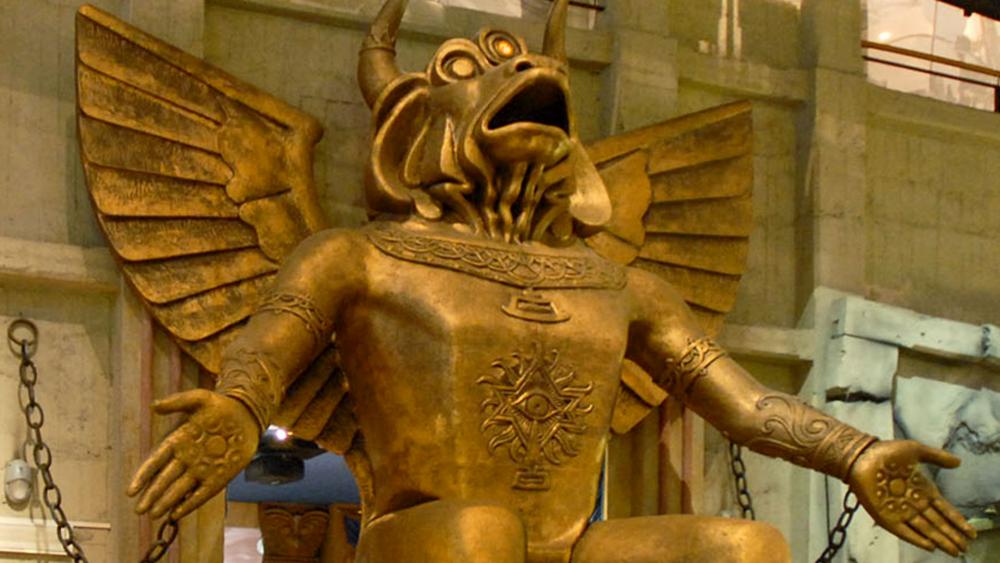 The statue on display at the Roman Colosseum is similar to this depiction of the pagan deity Moloch from the National Cinema Museum in Turin, Italy. | Wikimedia Commons/Jean-Pierre Dalbéra

Call it an odd juxtaposition, or a paean to the bloody pagan practices of two warring cities, ancient Rome and its ancient Mediterranean rival, Carthage.  From now through March 2020, as part of an exhibit celebrating the city of Carthage, a giant statue of Molech, the god of the ancient Canaanites and Carthaginians, will greet visitors at the entrance to the Roman Colosseum.

Molech is the pagan god who required his devotees to toss their children into his fiery belly as an act of worship. The location of the display is particularly worth noting since the Roman Colosseum is where many early Christians were slaughtered at the hands of lunatic dictators fearful of a faith they could not stop.

Previously, the Catholic Church had made the Colosseum a sacred site to honor these first Christians martyred for their faith, even placing Stations of the Cross there for the faithful to contemplate their sacrifice. Now it's guarded by the pagan god Molech, whose demand for child sacrifice has been compared to the modern epidemic of abortion, and the faithful are greeted with a statue honoring a pagan deity whose murderous spirit still seeks to kill children.

A giant statue of Moloch greets visitors to the Coliseum Carthage exhibit. Of course a god of death reigns in the arena, but the exculpatory didactic claims he didn't exist. Sacrifice of infants, documented by both biblical and Greek sources,by any other name,is still infanticide pic.twitter.com/bTfY7JAQ6v

LifeSite News reports it is not a welcome sight for some Christian pilgrims. "We were so excited the day we decided to go to the Colosseum," Alexandra Clark told the outlet via email. "But the moment we got there the sight that greeted us was horrifying! Standing guard over the entrance was the colossal pagan statue of Moloch. It was placed in that prime spot so that everyone that entered into the Colosseum had to pass it," she continued. For Clark, it was "a mockery" of the martyrdom of those early Christians.

The name for this pagan god is often spelled Molech in the Bible, but other cultures also use the spelling Moloch. According to LifeSite, the statue of Moloch that's been placed at the Colosseum is modeled on one found in the 1914 Italian silent film Cabiria. In the film, the idol of Moloch, set up in a Carthaginian temple, has a giant bronze furnace in his chest, into which hundreds of children are thrown. Cabiria, the heroine of the film, is threatened with this fiery fate.

Ancient Greek historians record that burning children alive as an offering was a common practice in Carthage. The Carthaginians "called the deity Baal and Cronus or Saturn, the Roman god who, according to myth, ate his own children lest they supplant him."

Molech is also mentioned several times in the Book of Leviticus, where child sacrifice is strictly forbidden.

Some traditional Catholics see an ironic timing of this display, calling it another confirmation that their basic church doctrine is being undermined from within. The debut of the Molech statue coincided with the meeting of the South American Amazon synod at the Vatican where pagan fertility statues were on display, even within sight of Pope Francis. The Catholic faithful were outraged.

Megan Fox writes in PJ Media, "It started when the opening ceremony in the Vatican garden was full of earth worship and what appeared to be idol worship happening right in front of the pope with his blessing. One doesn't have to be an art major to recognize ancient fertility goddesses...Prostrating before carved images of fertility goddesses is not Catholic."

Demands for an explanation went unaddressed. Finally, Fox writes, "some unidentified Catholics took matters into their own hands and walked into the church next to St. Peter's where the images were displayed and removed them and threw them into the Tiber."

It didn't help reassure those bold believers that the head of the Amazon Synod, Bishop Erwin Krautler, is reported to have said, "I have not yet baptized an Indian, and I also will not do it."

Fox explains the Catholic view of this: "This statement has not been denied by Krautler. Baptism is a key sacrament in the Catholic faith and the Church teaches that one cannot enter heaven without it."

In a statement explaining their actions, those who tossed the pagan artifacts into the Tiber said love required them to take action. "Because we love humanity, we cannot accept that people of a certain region should not get baptized and therefore are being denied entrance into heaven. It is our duty to follow the words of God..."

The takeaway from the Amazon Synod for traditional Catholics, according to Fox, is that "the Catholic Church has been thrown into a state of total confusion since Pope Francis ascended to the seat of St. Peter. His silence and the silence of Church leaders on crucial issues of the faith have created chaos and division between the left-wing and traditional Catholics."

And for the faithful, displaying a statue of Molech at the place where Nero tortured Christians and fed them to the lions is equally disturbing and another step toward exalting idols that should be cast down instead.

Image of Moloch acquired via Wikimedia Commons under license.