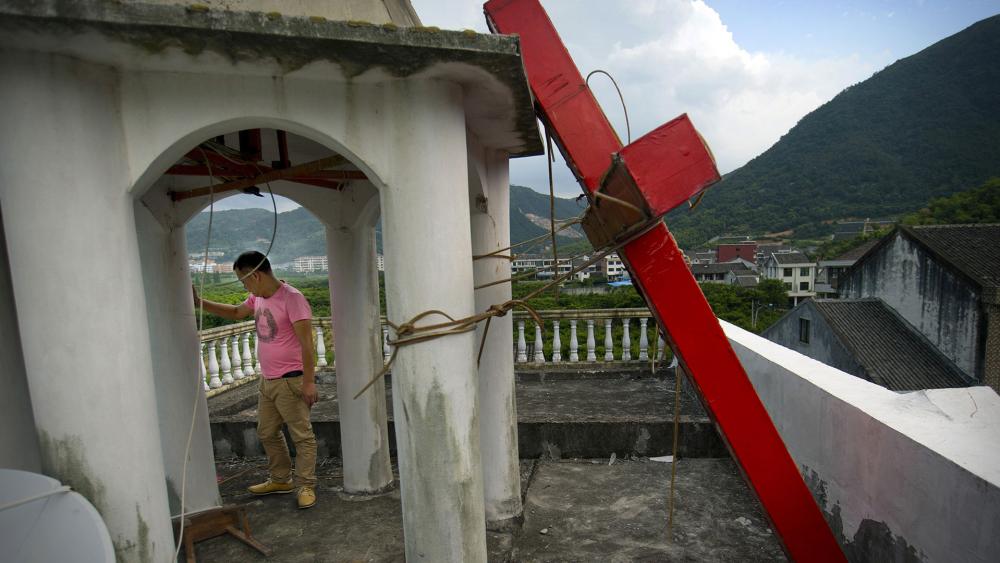 With the Chinese forced to devote huge resources to containing the spread of COVID-19, you would think that the communist government might temporarily lay off persecuting the nation’s hard-pressed Christian community.

Instead, the shuttering of churches to stem coronavirus infections has presented the state with a key opportunity to ransack sanctuaries and strip worship centers of their Christian symbolism.

The evidence is shocking. On March 13, and with residents in self-isolation, a church in Guoyang County, Anhui Province, had its cross removed in broad daylight. Video of the incident showed a crane winching a large red cross out of the church premises:

Though the church usually has around 40 people attending Sunday service, authorities reportedly exploited the nationwide shutdown by heading into the church and removing the cross while it was empty.

The state-mandated persecution hasn’t stopped there. Earlier this week, China Aid’s Bob Fu shared shocking footage of a church in Yixing city, Jiangsu, being razed to the ground. “Religious persecution continues even in the midst of #WuhanVirus,” he wrote.

Religious persecution continues even in the midst of #WuhanVirus March 11 Xiangbaishu Church in Yixing city, Jiangsu province was destroyed by #CCP govt. Cross is our Glory大疫当前，江苏宜兴香柏树教会,于3.11日遭到强拆.举国上下深感人民的苦难，但谁知道在十字架上那位上帝之子的苦难？ pic.twitter.com/wp35ZexYIu

According to International Christian Concern, most of the country’s churches — underground or state-approved — have been meeting online since the shutdown began. There is a worry, however, that the government will roll out a brutal crackdown on these virtual gatherings as soon as the virus response begins to settle down.

Faithwire: ‘Pray Together’: Christ the Redeemer Transformed With Stirring Tribute During Coronavirus Pandemic

To date, China has recorded almost 81,000 confirmed cases of the COVID-19 disease, with 3,200 deaths. The illness, which found its origins in the city of Wuhan, Hubei Province, has resulted in almost 10,000 fatalities worldwide.