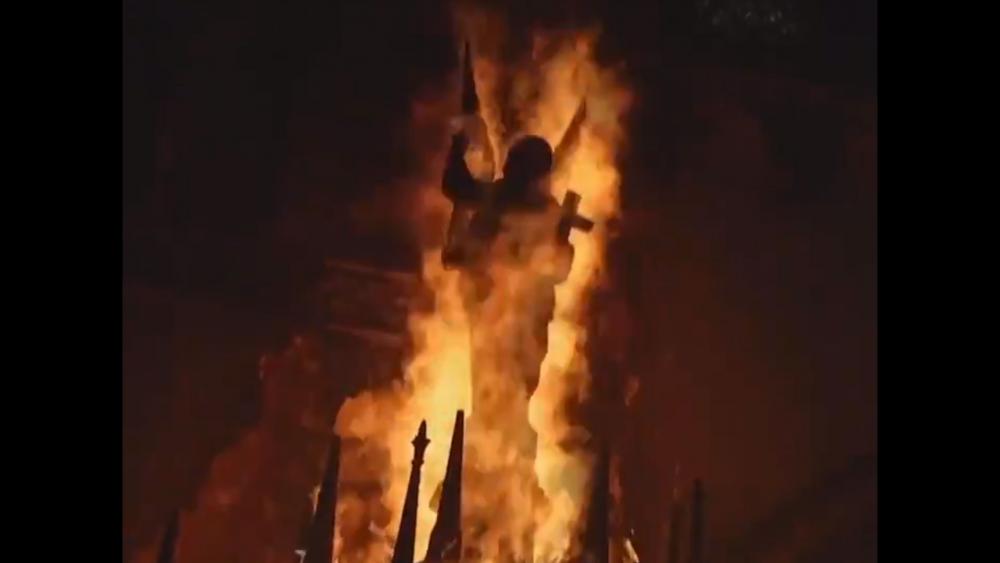 Two Catholic churches in Santiago, Chile were burned to the ground Sunday by large mobs of masked protestors.

The Wall Street Journal reports protests and riots broke out in the country's capital city over the weekend just one week before a nationwide vote referendum on whether to strike down the country's dictator-era constitution.

The protestors vandalized buildings, looted stores, and also set two churches on fire on the anniversary of last year's anti-government protest which drew thousands of people to Santiago.

Demonstrators also set fire to the church of La Asunción which engulfed the building and completely consumed its dome and bell tower.

Church leaders condemned the attacks and called for an end to the violence.

"To all of you, dear parishioners of Santiago, to all of you dear Chileans and people of goodwill and lovers of peace, I beg you: enough, enough violence. Let's not justify the unjustifiable. God does not want violence," said Archbishop of Santiago, Monsignor Celestino Aós.

Video posted to Twitter shows hundreds of protestors cheering as a flaming church spire falls to the ground.

Please pray for the persecuted church around the world.pic.twitter.com/kv4gFDPQrl

Around 25,000 protesters massed together in the Plaza Italia, the site of the 2019 protests, holding up banners demanding a new constitution, according to the Wall Street Journal.  Last year's rioting culminated in more than 30 deaths with billions of dollars in damages.

During the day, the protests were mostly peaceful, but after dark, they turned ugly as rioting broke out in the city.

Protesters were involved in several clashes with police who used tear gas and water cannon to quell the chaos.

"Those who carry out these acts of violence do not want Chileans to solve our problems through democratic means," Interior Minister Victor Perez told reporters.

A vote will be held on Oct. 25 in which up to 14.7 million Chileans will decide whether to change the constitution which was drafted during the country's military dictatorship.