The Daughters of Kobani: The Kurdish Women Warriors Who Helped Defeat ISIS 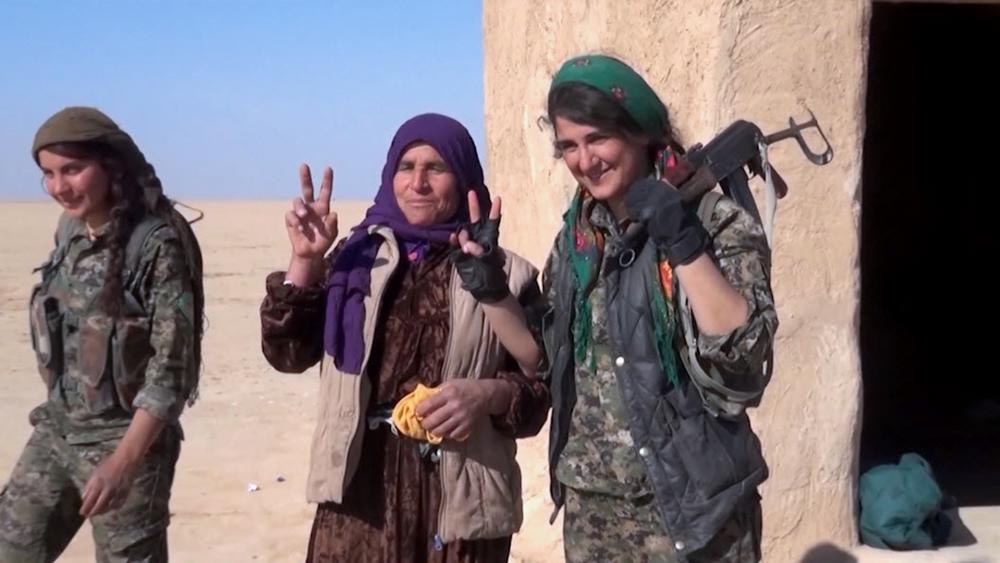 6237523505001
The Daughters of Kobani: The Kurdish Women Warriors Who Helped Defeat ISIS

They're known as the women who helped save their city from ISIS. In 2014, a female Kurdish militia in the town of Kobani on the Syrian-Turkish border, handed the Islamic State its first real defeat, helping drive the terrorists out of northern Syria. The story is now the subject of a new book, "The Daughters of Kobani."

In 2014, The Islamic State had swept across much of Syria, overtaking cities and spreading terror as civil war raged all around.  As ISIS approached a town called Kobani, a group of Kurdish female fighters, armed with AK-47's and a lot of courage, were determined not to let ISIS take their town, homes or their families. And although they had braided hair and painted fingernails, when it came to fighting ISIS they were as fierce as any male army.

"And they weren't just fighting ISIS, they were leading in battle, leading men and women in the fight against the extremists of the Islamic State," said Gayle Tzemach Lemmon, Author of "The Daughters of Kobani."

Lemmon introduces us to these women, incuding Azeema, a sniper, determined to stop ISIS at all costs.

"Even when so many had lost faith that Kobani would not fall, she (Azeema) would absolutely tell everybody, including her fighters, and including her sister, who sometimes called while she was in the middle of battle, literally, of taking fire from the Islamic state, she would say, we will not lose Kobani, we will fight until the end and we will win," Lemmon recalled.

"Yes, you asked me about Azeema...Azeema had a great story about how at the beginning she would hear on the walkey-talkey the men from ISIS saying, 'try to pick off the women, try to kill the women first' and then at the end when they saw what good snipers they were, they would be on the radio saying, 'hey, don't get too close to those women snipers they're very good' and they took that as a huge compliment and there's also the fact that the men of the Islamic State felt they couldn't go to paradise if they were killed by a woman.  And they would get on the radio and really say terrible things to these women who then used it as motivation to power them in their fight against ISIS," Lemmon said.

Lemmon's research into the women's protection forces, took her to the front lines where she also spent time wth Christian female fighters. "One young woman from a Christian family told me that her mother at first did not approve of her joining the all women's force. By then Isis had kidnapped Christians in the Hawar Valley and when her parents would go to church people would come up to them and say 'we're so proud of what your daughter is doing' and I really hope "The Daughters of Kobani" does justice to the courage, the bravery and the power of these young women," Lemmon said.

The battle for Kobani was considered a turning point in the war against the Islamic state.  Lemmon says female fightes played a big role in freeing Kobani from the grip of ISIS. "Women were front and center in the fight to stop the Islamic state and in Kobani this was their first battle-field defeat and women paid a central role in handing it to them," she said.

Lemmon says their battle skills earned the respect of U.S. Special Forces fighting alongside them.

"And there's a story of one man who said, when I saw how many young women, ponytails and AK 47's were going off to to fight ISIS, I thought, 'this is definitely a first for me, these are real and true warriors,'" she said.

For many of these women, it was not just about defeating ISIS but giving women more equality in the Middle East.

"There is no question that the next generation of girls born will see women protecting them, in that part of Syria and in that part of the region," Lemmon said. "And there's a story in the book about when they finally clear the town of Manbitch of the Islamic state, a woman comes out and sort of puts her hands on the faces of the young women and says we didn't even know you were real, we heard about you but we didn't know you were real and I think that's the power of seeing what women can be," Lemmon said.

As for the sniper Azeema, she was injured twice in battle with ISIS, pretty badly the second time but according to Lemmon, was determined to survive.

"One of the most beautiful moments of reporting this was she's telling me about this moment that she's injured the second time by the Islamic State and you want to talk about force of will, she's sitting there and says I will not die because that will be a gift to them, I will be here to see my people through to victory," Lemmon recalled.

"And so she's on the radio with her fighters saying 'listen, show them, show the men who bought and sold women what we are capable of and know that even if we fight and die, we will have died for something that matters.'" Lemmon said.