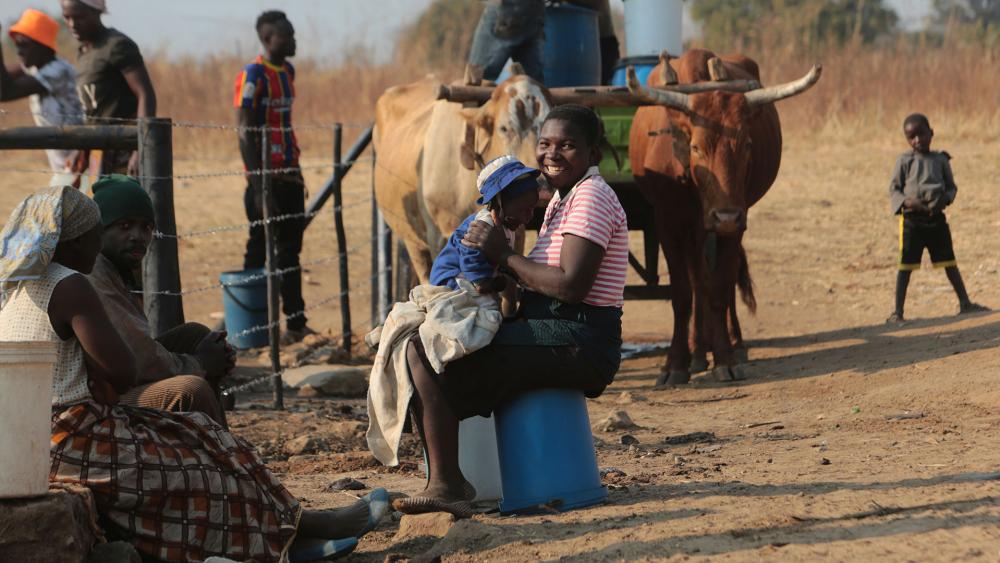 HARARE, Zimbabwe (AP) - At a busy market in a poor township outside Harare this week, Nyasha Ndou kept his mask in his pocket, as hundreds of other people, mostly unmasked, jostled to buy and sell fruit and vegetables displayed on wooden tables and plastic sheets. As in much of Zimbabwe, here the coronavirus is quickly being relegated to the past, as political rallies, concerts and home gatherings have returned.

“COVID-19 is gone, when did you last hear of anyone who has died of COVID-19?” Ndou said. “The mask is to protect my pocket,” he said. “The police demand bribes so I lose money if I don’t move around with a mask.” Earlier this week, Zimbabwe recorded just 33 new COVID-19 cases and zero deaths, in line with a recent fall in the disease across the continent, where World Health Organization data show that infections have been dropping since July.

When the coronavirus first emerged last year, health officials feared the pandemic would sweep across Africa, killing millions. Although it’s still unclear what COVID-19’s ultimate toll will be, that catastrophic scenario has yet to materialize in Zimbabwe or much of the continent.

But there is something “mysterious” going on in Africa that is puzzling scientists, said Wafaa El-Sadr, chair of global health at Columbia University. “Africa doesn’t have the vaccines and the resources to fight COVID-19 that they have in Europe and the U.S., but somehow they seem to be doing better,” she said.

Fewer than 6% of people in Africa are vaccinated. For months, the WHO has described Africa as “one of the least affected regions in the world” in its weekly pandemic reports.

Some researchers say the continent’s younger population -- the average age is 20 versus about 43 in Western Europe - in addition to their lower rates of urbanization and tendency to spend time outdoors, may have spared it the more lethal effects of the virus so far. Several studies are probing whether there might be other explanations, including genetic reasons or exposure to other diseases.

Christian Happi, director of the African Center of Excellence for Genomics of Infectious Diseases at Redeemer’s University in Nigeria, said authorities are used to curbing outbreaks even without vaccines and credited the extensive networks of community health workers.

“It’s not always about how much money you have or how sophisticated your hospitals are,” he said.

Devi Sridhar, chair of global public health at the University of Edinburgh, said African leaders haven’t gotten the credit they deserve for acting quickly, citing Mali’s decision to close its borders before COVID-19 even arrived.

“I think there’s a different cultural approach in Africa, where these countries have approached COVID with a sense of humility because they’ve experienced things like Ebola, polio and malaria,” Sridhar said.

In past months, the coronavirus has pummeled South Africa and is estimated to have killed more than 89,000 people there, by far the most deaths on the continent. But for now, African authorities, while acknowledging that there could be gaps, are not reporting huge numbers of unexpected fatalities that might be COVID-related. WHO data show that deaths in Africa make up just 3% of the global total. In comparison, deaths in the Americas and Europe account for 46% and 29%.

In Nigeria, Africa’s most populous country, the government has recorded nearly 3,000 deaths so far among its 200 million population. The U.S. records that many deaths every two or three days.

The low numbers have Nigerians like Opemipo Are, a 23-year-old in Abuja, feeling relieved. “They said there will be dead bodies on the streets and all that, but nothing like that happened,” she said.

On Friday, Nigerian authorities began a campaign to significantly expand the West African nation’s coronavirus immunization. Officials are aiming to inoculate half the population before February, a target they think will help them achieve herd immunity.

Oyewale Tomori, a Nigerian virologist who sits on several WHO advisory groups, suggested Africa might not even need as many vaccines as the West. It’s an idea that, while controversial, he says is being seriously discussed among African scientists - and is reminiscent of the proposal British officials made last March to let COVID-19 freely infect the population to build up immunity.

That doesn’t mean, however, that vaccines aren’t needed in Africa.

“We need to be vaccinating all out to prepare for the next wave,” said Salim Abdool Karim, an epidemiologist at South Africa’s University of KwaZulu-Natal, who previously advised the South African government on COVID-19. “Looking at what’s happening in Europe, the likelihood of more cases spilling over here is very high.”

The impact of the coronavirus has also been relatively muted in poor countries like Afghanistan, where experts predicted outbreaks amid ongoing conflict would prove disastrous.

Hashmat Arifi, a 23-year-old student in Kabul, said he hadn’t seen anyone wearing a mask in months, including at a recent wedding he attended alongside hundreds of guests. In his university classes, more than 20 students routinely sit unmasked in close quarters.

“I haven’t seen any cases of corona lately,” Arifi said. So far, Afghanistan has recorded about 7,200 deaths among its 39 million people, although little testing was done amid the conflict and the actual numbers of cases and deaths are unknown.

Back in Zimbabwe, doctors were grateful for the respite from COVID-19 - but feared it was only temporary.

“People should remain very vigilant,” warned Dr. Johannes Marisa, president of the Medical and Dental Private Practitioners of Zimbabwe Association. He fears that another coronavirus wave would hit Zimbabwe next month. “Complacency is what is going to destroy us because we may be caught unaware.”