Are the Biblical End Times Upon Us? The Shocking Russia-Iran Moment That Just Caused Ezekiel 38 to Trend on Social Media 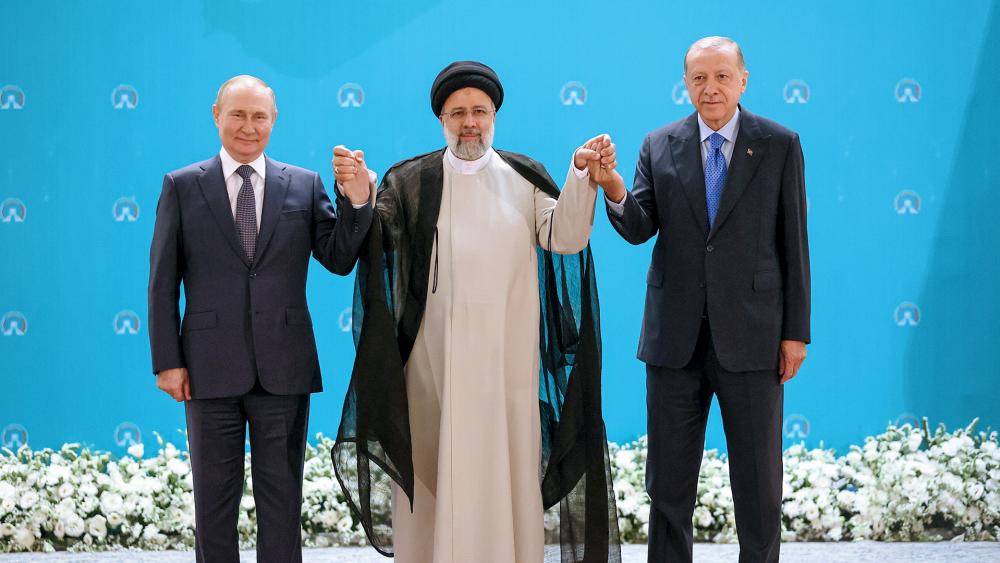 Ezekiel 38, a key Bible chapter containing what is believed to be important end times prophecies, trended on Twitter Tuesday — and the reasons are nothing short of noteworthy.

People were quick to point out alarming current events unfolding this week that led some to turn their focus to prophetic scripture. Before we get into the biblical implications, let’s briefly recap the international events and happenings at the center of intrigue.

Russia and Iran Getting Closer

Embattled Russian President Vladimir Putin made what The Washington Post called a “rare international trip to Iran” this week as the Ukraine war drags on and tensions with the West continue to boil.

Putin’s trip is perplexing and troubling for a variety of reasons. First and foremost, Russia and Iran are shunned by numerous nations, most notably the United States. These isolated countries share in that dynamic as well as in their quest for power.

Beyond that, Putin’s trip seems to indicate closer ties between the allies, as he met with Iran’s Supreme Leader Ayatollah Ali Khamenei and Iranian President Ebrahim Raisi before convening with Turkish President Recep Tayyip Erdogan, according to CBN News.

It’s also impossible to ignore the fact Putin’s visit to Iran comes right after President Joe Biden visited Israel, a nation Iran has repeatedly threatened. Biden and Israel addressed concerns over Iran — a longstanding global issue for which no real solution seems to be on the table.

Take that along with the other global catastrophes and events unfolding, and there’s much to discuss. The world is at a precarious juncture, which has led many pastors and end-times experts to openly ponder whether the biblical prophecies about the end of days are starting to unfold.

Greg Laurie, pastor of Harvest Christian Fellowship in Riverside, California, reminded Faithwire earlier this year of Jesus’ words in Matthew 24 that warn of wars, “rumors of wars,” plagues, and other such elements in the lead-up to the end of days.

“Jesus in Matthew 24 gave us signs of the times — one of them was there’ll be wars and rumors of wars,” Laurie said. “It certainly fits that. “No. 2, there would be pestilence and plague, and if COVID is not a modern-day plague, I don’t know it is, and it’s affected the whole planet [and it] still affects us to this day.”

Laurie and others are careful in discussing these issues, though the chaos — and these latest developments with Russia and Iran — are adding fuel to the fire, especially when it comes to Ezekiel 38.

What Is Gog and Magog?

The natural question with these events and proclamations in mind is: “Why was Ezekiel 38 trending on Twitter?” At the simplest level, the events above caught Bible readers’ eyes for fascinating reasons.

End times author Jeff Kinley spoke earlier this year with CBN’s Faithwire about Ezekiel 38, which he and others believe is currently an unfulfilled prophecy.

It all boils down to the “Gog and Magog” prophecy discussed in that chapter, which many believe references Russia. Many believe this Gog (an individual) will be a future leader from Russia (thought to be Magog).

According to Ezekiel, this Gog from Magog will attack Israel and other partner nations, including Persia (modern-day Iran), but God will step in and defeat the coalition.

The next natural question is: Why do many Bible experts believe Magog is Russia? Kinley explained some reasons, including geographic placement and directional mentions in Scripture.

“From a biblical perspective, anytime you have directions given in the Bible, then you always start with Israel being kind of the … center of the compass,” Kinley explained. “And it speaks about these nations coming from the uttermost parts of the north. If you just do a straight line north of Israel, you’re going to land in the middle of Russia.”

Author Joel Rosenberg is also among those who have vocally explored Old Testament prophecies about the biblical end of days, including Russia’s potential placement in the mix. He published a blog post a few years ago in which he discussed world events as they pertain to the writings of Ezekiel.

“The Hebrew prophet Ezekiel wrote 2,500 years ago that in the ‘last days’ of history, Russia and Iran will form a military alliance to attack Israel from the north,” Rosenberg wrote. “Bible scholars refer to this eschatological conflict, described in Ezekiel 38–39, as the ‘War of Gog & Magog.’”

He continued, “The one-day, future evil leader of Russia is going to form an alliance with Iran, Turkey, and some other hostile countries to come and surround and attack Israel in the last days.”

“Therefore, son of man, prophesy and say to Gog: ‘This is what the Sovereign Lord says: In that day, when my people Israel are living in safety, will you not take notice of it? You will come from your place in the far north, you and many nations with you, all of them riding on horses, a great horde, a mighty army. You will advance against my people Israel like a cloud that covers the land. In days to come, Gog, I will bring you against my land, so that the nations may know me when I am proved holy through you before their eyes.”

You can read much more about Gog and Magog in our explainer here.

What Are People Saying?

In light of these biblical texts — texts that have already been getting increased scrutiny since the Ukraine invasion — Putin’s trip to Iran immediately sparked a plethora of speculation on Twitter, with Ezekiel 38 starting to trend as a result.

Some Christians see the meeting between Iran, Russia, and Turkey as a harbinger of prophetic fulfillment. In contrast, others cast doubt on that idea and charged that current events could be getting improperly jammed into biblical prophecy.

Here’s a sampling of just some of the diverse reactions:

It’s impossible to conclude anything definitive from Putin’s meetings with Khamenei, Raisi, and Erdogan.

From a factual standpoint, it is understandable why Ezekiel 38 would be getting attention and trending on social media. But Christians must also be careful not to date-set and make definitive proclamations when it comes to the end of days.

The Middle East has long been a powder keg, and Russia’s actions in Ukraine have only upped the ante in global chaos. Read more about Russia, the Bible, and prophecy here.