Mikhail Gorbachev: The Man God Used to Open Up the Former Soviet Union to the Gospel 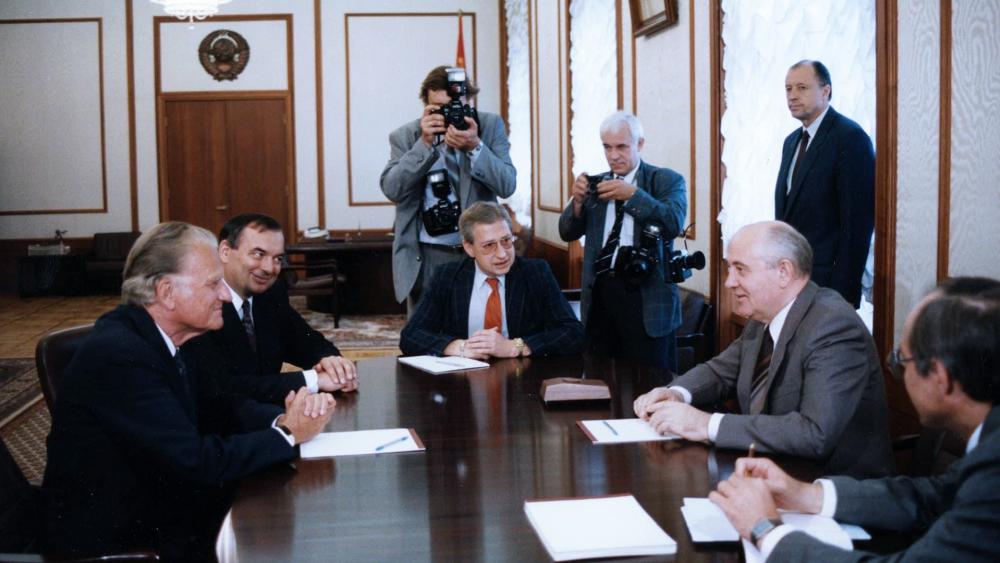 Mikhail Gorbachev meeting with evangelist Dr. Billy Graham (left) and Dr. Gregori Komendant, president of the Baptist Union (second from left), in 1992. The historic meeting opened the doors for the Gospel across Russia and nearby countries (Credit: BGEA)

He taught us the only two Russian words most of us know: perestroika (restructuring) and glasnost (openness).

Much has been written about Mikhail Gorbachev, the former leader of the Soviet Union (USSR), following his death Aug. 30, age 91.

But almost nothing has been said about his greatest and most enduring glasnost achievement: opening up this vast region of atheistic communism to the freedom of the Gospel message.

Just as President Ronald Reagan, in his famous 1987 speech at the Berlin Wall, urged Gorbachev to "tear down this wall," so Gorbachev tore down the barriers to the Gospel, and opened the door for millions across Russia and surrounding countries to discover the Truth.

But the era of glasnost and religious freedom didn't "just happen" because Gorbachev rose to power. This new "perestroika" that flung open wide the doors to the Good News of Jesus Christ was orchestrated by a much higher Power. And it began with simple prayers of faith.

'Much Prayer, Much Power'

More than a half-century before the Berlin Wall fell, former atheist-turned-believer Peter Deyneka Sr. from Belarus began praying on his knees for the miracle of a Gospel breakthrough and founded Slavic Gospel Association (SGA), the mission I now have the privilege of leading.

During the following dark decades, when believers in the former Soviet Union faced persecution, imprisonment and sometimes torture, Rev. Deyneka never faltered in his support. "Much prayer, much power!" became his rallying cry.

In 1987, the same year Reagan made his historic Berlin Wall speech, Rev. Deyneka transitioned from this life to his heavenly home. He'd prayed and strived faithfully for over 50 years, steadfastly believing God would open the floodgates for the Gospel across the former USSR. Five years after Rev. Deyneka's death, Dr. Billy Graham preached that same Gospel message to more than 100,000 people in Moscow after the Soviet Union collapsed under Gorbachev's reforms.

In 1992, something took place that would have been unthinkable – even impossible – just a decade or so earlier: a Soviet leader, President Gorbachev, sat face-to-face across the table from Dr. Graham and Dr. Gregori Komendant, president of SGA's local partner, the Baptist Union. That historic meeting proved instrumental in opening the entire Soviet world to the Gospel. Subsequently, each member nation of the newly formed Commonwealth of Independent States (CIS) established its own national Baptist Union.

Rev. Deyneka didn't live to see his prayers answered. But God used Mikhail Gorbachev as his sovereign instrument to "tear down the wall" and deliver "Gospel glasnost" for millions who'd never heard about the God who loves them.

I can't help but think of how Rev. Deyneka would have rejoiced to see this day, and also how God has worked through the ministry of Slavic Gospel Association since then.

Across the former Soviet stronghold, we've helped establish regional ministry centers to serve local evangelical churches and pastors, supported seminaries and Bible institutes for the training of pastors and church workers, sponsored hundreds of local missionary pastors to take the Gospel to the unreached, and launched church-run ministries such as Orphans Reborn, Immanuel's Child, compassion teams and summer camps to bring practical aid and the hope of the Gospel to hundreds of thousands of families, orphans and neglected children.

I don't know if Mikhail Gorbachev was ever aware that God used him – and his mission of perestroika and glasnost – to bring spiritual revival to the former Soviet Union. Like King Cyrus in the Bible, God sovereignly directed the actions of President Gorbachev to "open the doors before him, and the gates shall not be shut" (Isaiah 45:1, ASV).

Things are changing rapidly across the former Soviet Union today, but God is still working mightily through his faithful church. Slavic Gospel Association is deeply privileged to be a small part of the Gospel's advance across this massive region that covers 11 time zones.

And we remember that God uses the most "unlikely" people – like Mikhail Gorbachev – to accomplish his own "glasnost" mission and throw open the gates of heaven.