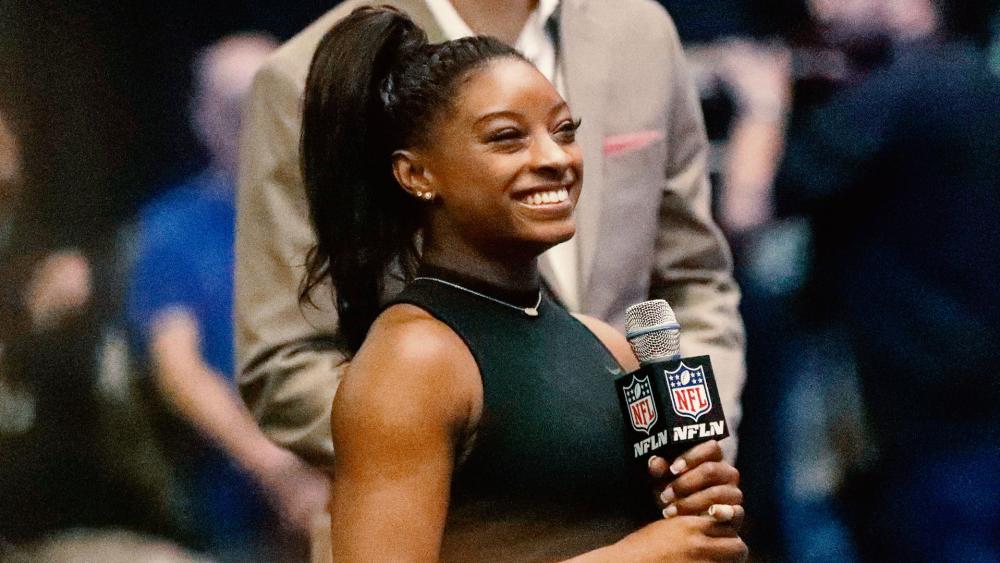 In God's Hands: Simone Biles on the Great Advice that Changed Her Life

Simone Biles won our hearts and five medals at the 2016 Olympic Games in Rio. She wowed the world during those two weeks, with her gravity-defying gymnastic routines and infectious smile.

The four-time gold medalist took some time to share with CBN how she beat the odds to become an Olympic champion.

Her time with her Olympic teammates is something she will never forget.

"To be part of the Final Five was really amazing," Biles says. "It's something that I'll cherish in my heart forever. And it's something that we'll always be connected with because we did so well at the games. And the bond that we've had, we're like sisters."

Simone is the most decorated American gymnast. That honor is a testament to her love of the sport, which began when she was a child.

"I guess I loved the freedom of the sport. There was no right or wrongs that you could do. You didn't have to have one particular body type. You made everything mold into what you were born with," Simone says.

"I think God gives every individual something special and mine was talent. So to never take it for granted, which my dad always told me, 'Don't waste God's gift that He gave you.' Because it's like it's a once in a lifetime opportunity. One day I'll be too old to do gymnastics. So for now I have to use it to the best of my ability," she says.

Biles' journey to the top has not been easy. It began with a turbulent home life.

"My biological mom was suffering with drugs and alcohol, I do believe. And so we were taken into foster care. And we were in foster care for a little bit until my grandparents decided to take us in. So then that's kind of when our life reformed and everything," Simone says.

Her grandmother Nellie, who she affectionately calls mom, says God opened her heart to adopt Simone and her sister Adria.

"It was meant to be, I mean without a shadow of a doubt, nothing was supposed to be different and it's the best decision we've ever made," Nellie says.

Since then, Nellie has encouraged Simone to put her life and career in God's hands.

"I am a very prayerful person so I encourage my children to do the same thing too, to pray. And I know it doesn't matter what situation you are ever in you just put it in the hands of the Lord and he's going to walk you through it," Nellie says.

"I was taught that you can go to Him for anything and he's the one that directs your life. She would always tell you if you don't know, leave it up to God. Pray to Him about it," Simone says.

Simone sees God's hand in her success and in her disappointments, like the time she failed to make the 2011 team.

"I didn't make National team so I was super upset about that. But I knew that it was God's way of telling me that I needed to go home, train harder, so that next year I could make it happen. So I believe that some obstacles that we've had always work out for the better because God knows that without those you wouldn't be as strong as you are," she says.

Nellie says her proudest moments have come from Simone's ability to make hard decisions and to stick by them.

"The fact that Simone made a difficult decision at an early age made her a stronger person," says Nellie.

"I think the proudest moment I had of Simone's life is her talking to me and telling me she wants to go an elite track of gymnastics to compete for her country. A little girl told me that and she did it."

In her new book Courage to Soar, Simone shares her life story, including her struggles with body image.

"I didn't struggle with like weight issues. It was just more of body image, because I didn't look like the other kids in my class. I looked more like the boys. I was stronger than most of the girls, stronger than most of the boys too even. Whenever I was younger I would try to hide my muscles. Because I'm like it's not that pretty, muscles are beauty and I think people are starting, slowly starting to realize that you can be muscular and a female and be beautiful at the same time," she says.

"So I think it's important for kids, and gymnasts particularly, to understand that because we wouldn't be able to do what we do if we didn't have the muscular body build," she continues.

As she looks to the future, Simone says she will continue to give all she's got, with the talent that God gave her. And she encourages others to do the same.

"You're so young when you think of all these dreams but once you put hard work and dedication into it you can really achieve anything. I think the mind is one of the strongest things you have," says Simone.

"I hope before I end my career, I give all of my energy and effort and my talent towards that sport before I finally like hang up my grips and say I'm done."